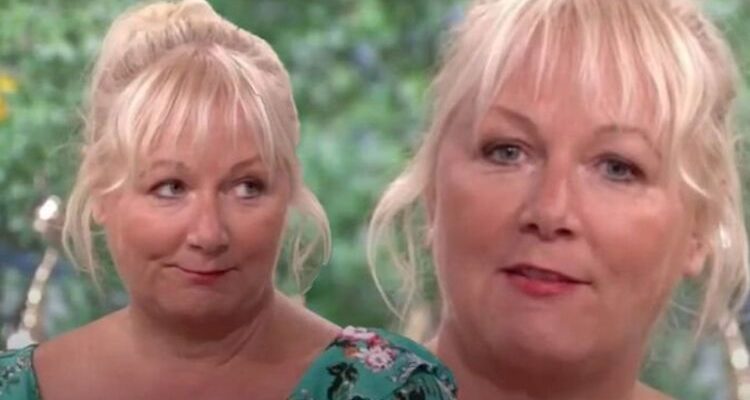 As part of World Sepsis Day 2019, Cleaver chose to speak out about her experience with the condition. Appearing on an episode of This Morning, Cleaver explained to then hosts Eamonn Holmes and Ruth Langsford, that she first thought pains were a flare up of her irritable bowel syndrome (IBS), but soon found out that she was suffering from a kidney infection. The condition led to some bizarre and worrying symptoms and even her costars began to worry about her health.

Cleaver explained: “I was working and I had gone in on the Tuesday and late in the afternoon I said, ‘Are you gonna see me in this scene because I’m really not feeling great?

“Then I came back in the next morning at half seven and it was the hottest day of the year and I was on set with a hot water bottle, shaking.

“Melanie Hill [Cathy Matthews] turns to me and says, ‘Sue, look at your feet’. They were blue and purple and all the goosebumps on my arms. [I was] in pain and freezing cold.

“I went home at lunchtime, I got into bed. I had socks on, leggings on and thinking – not only have I got really bad IBS, but I’ve caught the flu now.”

Still unaware of the extent of her health issues, Cleaver’s husband, James Quinn who also works on the set of Coronation Street, rushed to her aid as he knew something was not right.

“He said to his colleagues, ‘Something’s not right. I can’t hear what she’s saying because her teeth are chattering too much’,” Cleaver went on to say.

“He came back and I was in bed and I was just shaking. I said, ‘I’ve taken paracetamol, I’ll be fine in the morning.’ And he rang our daughter-in-law, who’s a paramedic, who said, ‘Get her to hospital’.

“I got there and said my temperature was 39.9. I didn’t know I had sepsis until the next day.”

Sepsis Alliance explains that the condition occurs as the body’s response to an infection. It can lead to tissue damage, organ failure and even death in some cases.

Like strokes or heart attacks, sepsis is a medical emergency that requires rapid diagnosis and treatment. Sepsis can lead to severe sepsis and septic shock.

Due to its severity, individuals should be aware of the signs of sepsis, especially as the condition can have symptoms that are similar to other conditions.

The NHS advises that an adult or older child should go to A&E if they experience any of the following symptoms:
Acting confused, slurred speech or not making sense
Blue, pale or blotchy skin, lips or tongue
A rash that does not fade when you roll a glass over it, the same as meningitis
Difficulty breathing, breathlessness or breathing very fast.

In addition, if a baby or young child starts to turn blue, has a rash that does not fade, has difficulty breathing or are not responding like they normally do, they should be taken to A&E.

The Sepsis Alliance adds that individuals should be aware of the signs of sepsis by following the acronym TIME. This stands for the following:

Once in hospital, individuals will normally get treated with antibiotics, but other tests and treatment methods may be needed depending on the individuals symptoms.

Septic shock is the most severe level and is diagnosed when your blood pressure drops to dangerous levels.

Most people recover from mild sepsis, but the mortality rate for septic shock is about 40 percent, with those who suffer from an episode of severe sepsis at higher risk of future infections.

Making a full recovery from sepsis will take time, with some individuals experiencing both physical and emotional symptoms for months after.

These long-term effects are sometimes called post-sepsis syndrome, and can include: