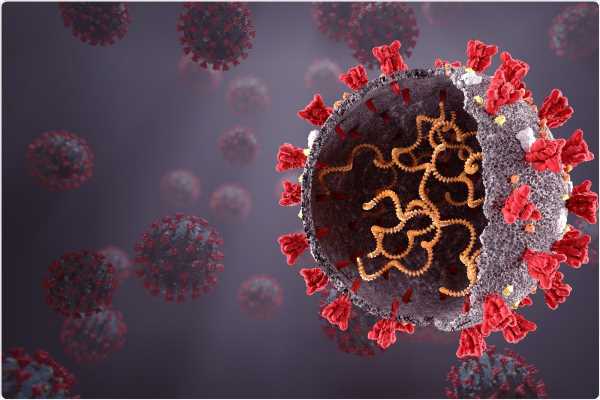 With new variants emerging, often showing increased transmissibility and virulence, governments and health organizations do not appear to be within striking distance of effectively containing the ongoing coronavirus disease 2019 (COVID-19) pandemic. Caused by the severe acute respiratory syndrome coronavirus 2 (SARS-CoV-2), this condition presents with a wide spectrum of severity, ranging from asymptomatic infection through mild or moderate COVID-19 to severe or critical disease.

A new preprint on the bioRxiv* server reports the association of subgenomic RNA (sgRNA) production, the structural differences between sgRNA variants, and clinical severity in 81 clinical specimens obtained from both asymptomatic and symptomatic individuals with SARS-CoV-2 infection. The aim was to evaluate the genomic profiles associated with various levels of COVID-19 severity. 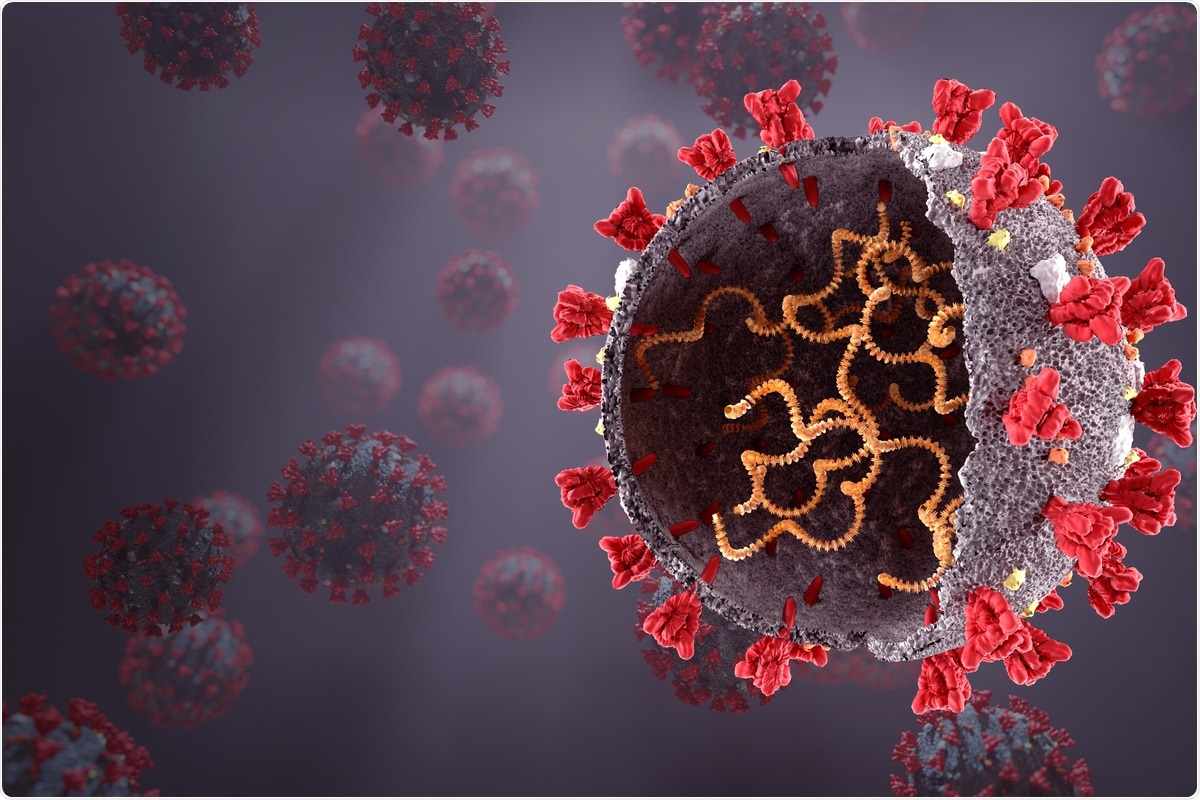 The first results in the production of 30 kb genomic RNA (gRNA), while the second process causes a distinct set of spliced subgenomic RNA transcripts (sgRNA) to be produced by discontinuous transcription. These sgRNAs act as viral mRNAs, in order to initiate the translation of many structural and accessory proteins that are essential for the production of new viral particles, their packaging and release.

The presence of sgRNA occurs within infected cells, but it is obvious that only gRNA is packaged into the new virion. Thus, sgRNAs could be a proxy for viral replication and for viral fitness within the host.

Recent studies show that structural variations in sgRNAs affect the severity of the disease, transmissibility and immune response. The current study showed clear links between the type and expression of sgRNA and the clinical severity of COVID-19.

Different types of sgRNA retained the same proportion and expression ranking in each sample. In all samples, the sgRNA encoding the nucleocapsid or N protein was most abundant, and that transcribing ORF7b the least.

This could indicate, they say, “a potential selection force for different types of viral variants adapted in distinct cohorts of host responses.”

These deletions would cause truncation of the ORF3a protein, with weaker pro-apoptotic properties, and mild inflammation, thus resulting in very mild or asymptomatic infection. 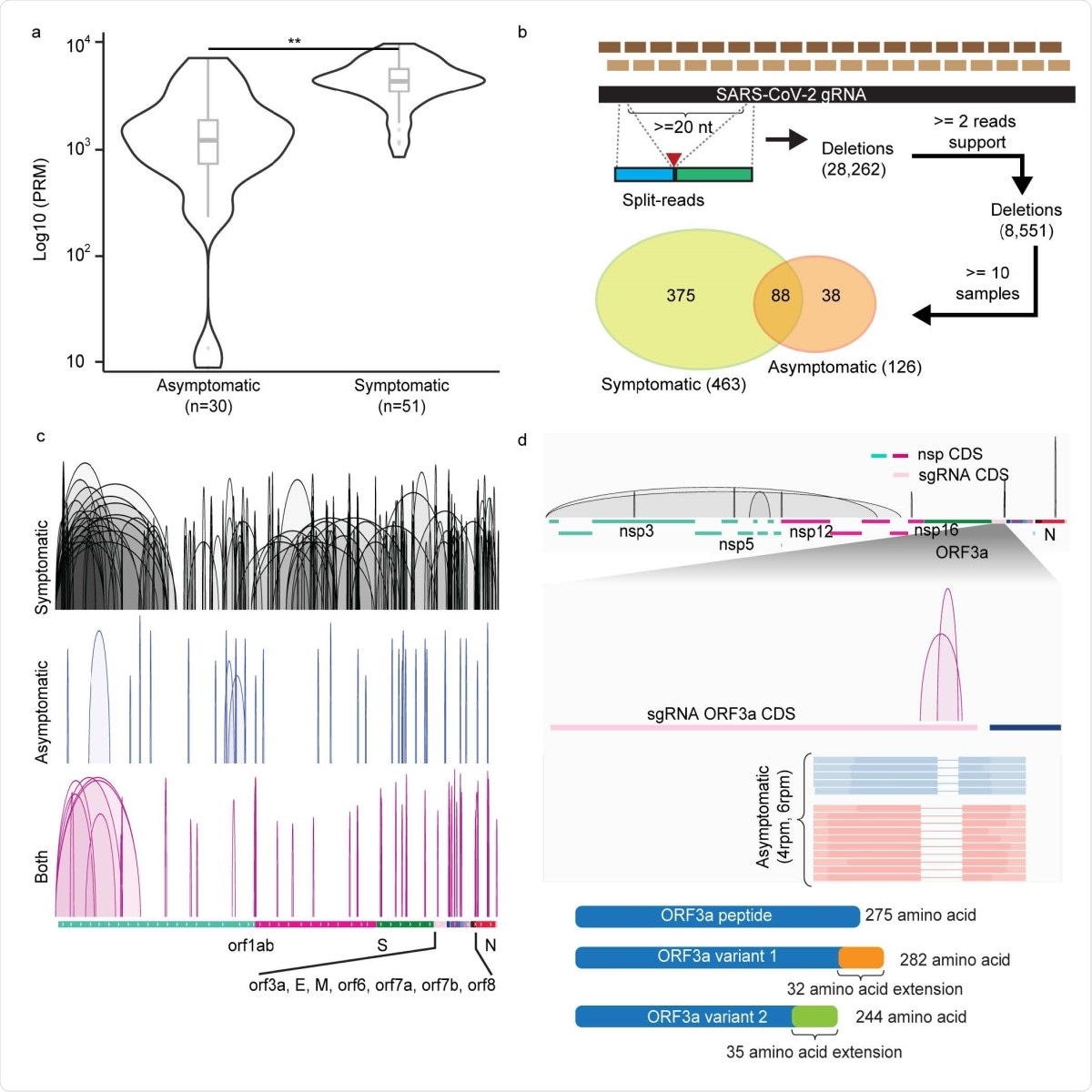 Similar associations with asymptomatic infection were found in the case of deletions in the protein-coding region of sgRNA for other major structural and non-structural proteins encoding the N protein and essential viral enzymes.

The researchers point out that the presence of distinct deletions in the viral sgRNAs in infected symptomatic and asymptomatic individuals, consistently observed across a range of different hosts, strongly supports their contribution to altered function within the different structural variants. Such changes in function could lead to altered virulence and pathogenicity between variants.

The wide range of deletions is notable. In order to understand their origin, whether during replication or transcription, and how they affected the protein products, the researchers performed full-length sequencing in order to explore them against the genetic background of the sgRNA structure as a whole.

They found that most derived from poor RNA polymerase fidelity leading to inaccurate viral gRNA replication. These were then incorporated via transcription into the sgRNAs. Such structural variations are likely to be very frequent and may be present in a large percentage of the viral population in a host, during active replicative infection.

The presence of a number of alternative sgRNAs and the protein versions they encode could indicate the presence of quasispecies within a host. This could accelerate adaptation to the host, a phenomenon often observed in other RNA viruses.

Most of the encoded proteins among the sgRNA variants from these clinical samples were full-length proteins. The least affected were ORF6 and envelope protein, predicted to encode wildtype full-length protein in over 90%. However, the most common variants of the spike and of ORF3a proteins were those with the now globally dominant D614G mutation, and the Q57H mutation, which has increased in proportion since February 2020.

Among the truncated protein products, 56% and 41% of the spike and N proteins were included. When annotated, the researchers found that, surprisingly, over 40% of the truncated spike and N proteins lacked the receptor-binding domain (RBD) and RNA-binding, respectively. The loss of these protein domains would prevent viral entry into the host cell, and virus transcription and assembly, respectively.

Since the spike and N proteins are major targets for developing vaccines, therapeutic antibodies and antiviral drugs, their loss or functional truncation could have serious implications on the efficacy of such strategies.

The researchers found that viral genomes from asymptomatic and symptomatic infections contain distinct arrays of deletions. Each deletion array is preferentially and reliably linked to one of these presentations only. This suggests that sgRNA profiles are significantly linked to the clinical features of the infection.

A closer examination of the predicted viral proteomes, using full-length viral transcripts as the base, showed that SARS-CoV-2 is undergoing significant and rapid change.

With asymptomatic infection, there is a relative reduction in sgRNA production, indicating repression of viral transcription independent of the viral load. As such, sgRNA characterization of PCR-positive samples could help distinguish those with active replication from others.

Notably, the sgRNA/gRNA ratio bears a strong correlation with clinical symptoms. As such, “RT-qPCR based assays to quantitatively evaluate the relative abundance of sgRNAs may be a predictive measure of the clinical severity of COVID-19 symptoms.” This could help allocate healthcare resources where urgently required in scenarios where they are under intense pressure due to spiking cases and mortality rates.