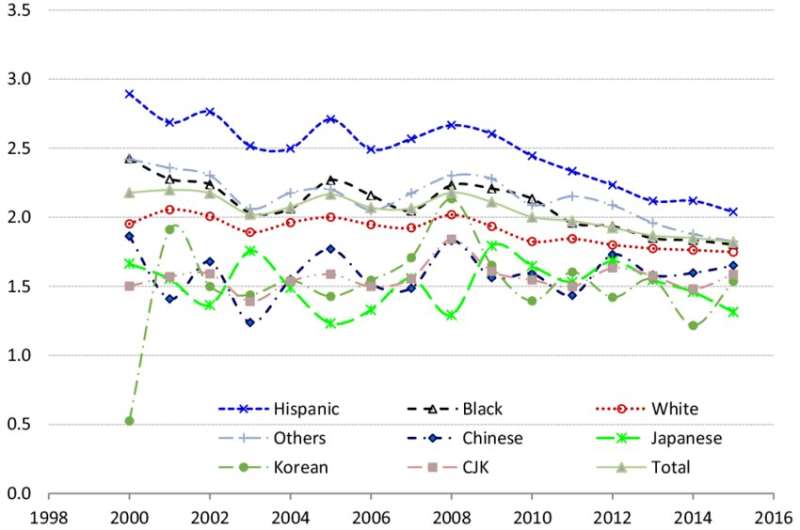 College-educated Black women in the United States give birth to fewer children than their white and Hispanic counterparts, according to a new study coauthored by Yale sociologist Emma Zang.

The study, published in the journal Population Studies, examines the interplay of race, ethnicity, and education in shaping the fertility levels of U.S. women born between 1960 and 1980. It also showed that Black and Hispanic women without college degrees or less than a high-school education have more births than similarly educated white women. Among the college-educated, Hispanic women had the highest fertility compared to Black and white women with college degrees.

“Conventional wisdom holds that racial or ethnic disparities in fertility will fade once women in minority groups attain similar education levels and socioeconomic status as white women, but we find that gaps occur at all education levels,” said Zang, assistant professor of sociology in Yale’s Faculty of Arts and Sciences and the study’s lead author. “In general, highly educated women have fewer children than less educated women, but this doesn’t explain the disparities we found among women with college degrees.

“Our results highlight the need to study differences in childbearing among socioeconomically advantaged women as well as those with fewer financial resources.”

Unlike previous research on race and fertility in the United States, which has typically focused exclusively on Black and white women, this new study included Hispanic women, who represent an ethnic group that accounts for at least 19% of the U.S. population, according to the Census Bureau.

For the research, Zang and coauthors Chloe Sariego, a Ph.D. candidate in the Department of Sociology, and Anirudh Krishnan of the Abdul Latif Jameel Poverty Action Lab analyzed four waves of longitudinal survey data from the National Survey of Family Growth (NSFG) from 2006 to 2017 involving a nationally representative sample of 11,117 women.

They calculated the average number of children women from each racial/ethnic group and educational level would have over the course of their reproductive years. Additionally, they analyzed the proportion of women from each group who give birth to one, two, or three children.

Overall, they found that college-educated women across racial and ethnic groups have fewer children than those who did not graduate college. The difference in fertility between college-educated Black and white women is driven mainly by the smaller proportion of Black mothers giving birth to a second child, the study found.

A possible explanation for the lower fertility in college-educated Black women is that they postponed having their first child for so long that they lacked the time to have additional children during their reproductive years. However, the study found little evidence that the timing of when women decide to have children causes disparities between racial/ethnic groups across educational levels.

“Are the differences in fertility the product of highly educated Black and Hispanic women being more aware of the higher risk of pregnancy-related complications among their racial groups, such as miscarriage, infant mortality, and maternal mortality?” she said.