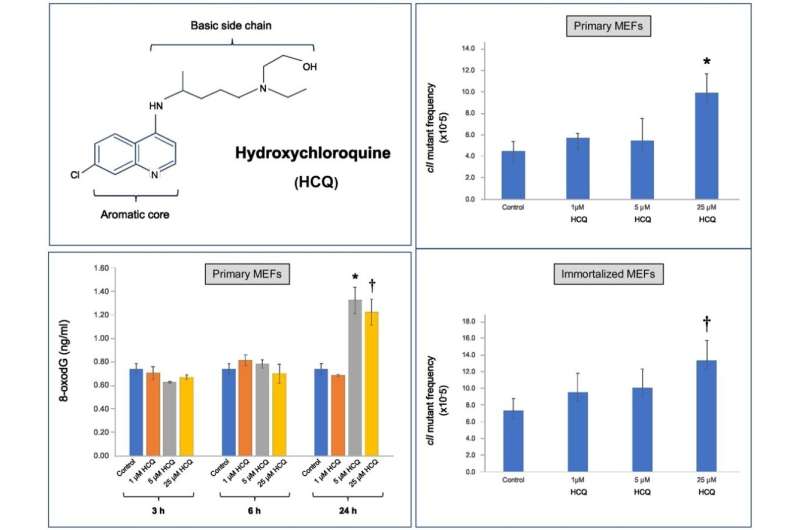 During the height of the pandemic, as scientists worldwide raced to develop a vaccine, hydroxychloroquine (HCQ) emerged as a flashpoint of controversy. Pitting proponents of using the drug to fight COVID-19 against skeptics citing a lack of evidence of efficacy, the debate spilled into public view, polarizing national and international opinion.

Now, a new study published in the journal DNA Repair shows, for the first time, HCQ’s genotoxicity in mammalian cells. The study was led by Ahmad Besaratinia, Ph.D., professor of research in the Department of Population and Public Health Sciences at the Keck School of Medicine of USC.

“The uproar over HCQ drew our group’s attention, and we realized that, although the drug has been widely used for the treatment of diseases ranging from malaria to rheumatoid arthritis, its exact mechanisms of action are only beginning to be understood,” Besaratinia says. “Most importantly, there was no data on whether HCQ has adverse effects on the genome.”

Besaratinia’s study demonstrated conclusively that HCQ exhibits DNA-damaging and mutagenic effects at a clinically achievable dose. He notes that the dosages were critical to the findings. “We conducted the study using a cell culture system derived from embryonic mouse cells. Whereas many in vitro experiments administer unrealistically high levels of a drug for testing, we used therapeutic doses of HCQ that are actually given to patients,” he says.

Use of HCQ has long been associated with cardiotoxicity and ophthalmologic and gastrointestinal complications. Besaratinia’s study suggests the possibility of additional side effects that might impact patient populations. For instance, mutations induced by DNA damage are the cause of many chronic diseases including cancer. “This drug is capable of inducing genetic mutation, which means we must carefully measure the risks and benefits of its use, especially in the context of clinical trials,” he says.

Besaratinia and his team performed the study during lockdown, when USC’s campus was largely closed. “Some scientists doing COVID-19-related research were exempt from the university’s stay-at-home order,” Besaratinia says. “We were part of a limited number of groups allowed to have one designated person at a time report to the lab. The hope was that our work could help shed light on the risks versus benefits of using HCQ in a variety of contexts.”

Weighing risks and benefits in decision-making

Though the study did not specifically evaluate HCQ’s ability to treat COVID-19, it did raise warnings about using the drug without fully assessing its potential for harm—and the need for informing volunteers in clinical trials about its potential adverse effects. “It is important to distinguish between the use of this drug in clinical trials versus using it to treat diseases for which it has been proven effective over the course of decades,” Besaratinia says. “If a patient’s need for HCQ outweighs the risks of using the drug, it makes perfect sense to prescribe it. But when it comes to healthy volunteers signing up for a clinical trial, they need to be aware of what the side effects may be so they can make an informed decision.”

Besaratinia points out that interspecies differences (between mice and humans), as well as in vitro versus in vivo conditions, may impact both the pharmacokinetics and pharmacodynamics of drugs like HCQ and that his team’s findings must now be validated. He says the need for follow up studies is pressing.