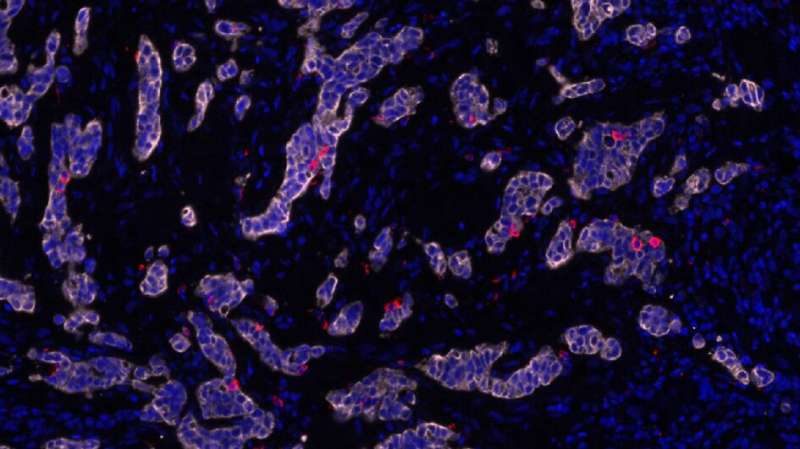 Scientists have shown how stomach cancers can dodge the effects of a promising new experimental treatment—raising the possibility of outsmarting cancer by predicting drug resistance in advance.

Their new study found that that stomach cancers could develop resistance to a new class of drugs called ATR inhibitors by switching off the activity of two key genes.

The findings could pave the way for a genetic test to predict which patients are most likely to respond to ATR inhibitors, and open the possibility of overcoming resistance through new combination treatments.

The study was led by a team at The Institute of Cancer Research, London, and The Royal Marsden NHS Foundation Trust, and is published in the journal Cancer Research.

Scientists used the gene editing technology CRISPR in the lab to break or switch off each of 25,000 genes in cancer cells treated with ATR inhibitors, to identify which genes contributed to drug resistance.

Switching off either of two genes called SMG8 or SMG9 made cancer cells resistant to ATR inhibitors and also led to increased activity of another gene called SMG1, which further drove drug resistance.

But the researchers showed that when SMG8 and SMG9 were switched off, cancer cells remained able to repair their DNA even in the presence of ATR inhibitors.

They also found that ATR inhibitors lost their ability to rein in cell division in cancer cells which had SMG8 or SMG9 mutations.

The researchers now want to determine whether the results hold promise for patients treated in the clinic—with those whose cancers have genetic defects in SMG8, SMG9 or SMG1 responding differently to ATR inhibitors.

They hope to use this information to create a test which could select patients whose cancers are most likely to respond to ATR inhibitors, or else anticipate drug resistance in advance. It could also be possible to overcome drug resistance by creating drugs that disable the resistance mechanism.

Researchers at The Institute of Cancer Research (ICR) and The Royal Marsden have been involved in the clinical development of ATR inhibitors for several years—including identifying genes that could select patients for treatment, and taking the drugs to patients in early-stage clinical trials.

Early trials of the drugs have been promising, but inevitably many patients have developed drug resistance.

About 6,500 people are diagnosed with stomach cancer every year in the U.K. Around one in four patients with advanced stomach cancer have tumors with genetic alterations in DNA repair genes which could make them susceptible to drugs like ATR inhibitors.

Study leader Professor Chris Lord, professor of cancer genomics at The Institute of Cancer Research, London, said, “Our research has unpicked the genetic changes which are allowing some stomach cancers to dodge the effects of an exciting new class of treatment called ATR inhibitors.

“ATR inhibitor drugs represent a promising and badly needed new treatment option for people with stomach cancer—so it is important to understand how resistance can emerge. We believe our findings could lead to new tests and ultimately treatment strategies, to allow us to stay one step ahead of cancer.

“Our discovery suggests three key genes are involved in making stomach cancers resistant to treatment with ATR inhibitors. It could lay the groundwork for future clinical trials to test out new drug combinations and other treatment approaches designed to overcome cancer’s drug resistance.”

Dr. Irene Chong, senior author and consultant clinical oncologist and clinician scientist at The Royal Marsden NHS Foundation Trust, said, “As a clinician who treats gastric cancer, I am acutely aware that new strategies are urgently required for patients with limited treatment options. Our study shows that ATR inhibitors may represent an important therapeutic option for subgroups of patients with gastric cancer, and our work identified a novel mechanism of resistance, which could help us understand how we are able to overcome drug resistance. This could ultimately lead to new treatment strategies in the future. I would like to thank my post-doctorate fellow Dr. Marta Llorca Cardenosa for working tirelessly on this project as well as our collaborators who worked alongside.”

Professor Kristian Helin, Chief Executive of The Institute of Cancer Research, London, said, “ATR inhibitors are exciting agents to treat different types of cancer but like most cancer drugs, they are associated with unwanted side effects, and it may therefore not be possible to use the desired dose. Another problem is that ATR inhibitors may also stop working as the cancer develops resistance toward the drug.

“In identifying genetic alterations that can make stomach cancers become resistant to treatment, this study could pave the way for future tests which can pick out patients who will respond better to ATR inhibitors. I am hopeful that these findings will lead to new treatment strategies for patients that can overcome or prevent drug resistance.”

Dr. Sam Godfrey, research information lead at Cancer Research U.K., said, “Drug resistance is a common problem in treating cancer, so predicting it or even stopping it could allow us to use existing cancer treatments more effectively.