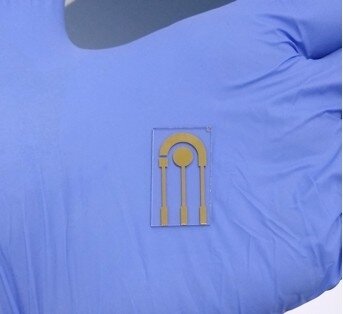 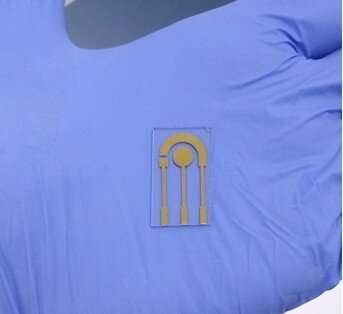 The efficacy of biosensors used in clinical tests depends critically on the surface of the device on which the biorecognition molecules are immobilized. This surface can be adjusted and sometimes controlled using self-assembled molecular monolayers as matrices. The monolayers are films made up of organic molecules that under the right conditions assemble spontaneously on metal surfaces via chemical bonds between the sulfur atoms and the metal.

A study conducted at the University of São Paulo’s São Carlos Physics Institute (IFSC-USP) in Brazil compared the performances of two types of self-assembled monolayers, one consisting of mercaptoacetic acid (MAA) in water and ethanol, and another of 11-mercaptoundecanoic acid (11-MUA) in ethanol. The respective films were evaluated in terms of their capacity to produce sensors for detection of the gene PCA3, which is specific to prostate cancer cells.

“We showed that efficient immobilization of a simple DNA strip to detect the gene PCA3 can be achieved even in less organized monolayers, provided the terminal groups are ionized,” Paulo Augusto Raymundo Pereira, lead author of the study, told. An article reporting the findings is published in The Journal of Physical Chemistry C.

The study was supported by São Paulo Research Foundation—FAPESP via a postdoctoral fellowship awarded to Raymundo-Pereira, and a scholarship and a Regular Research Grant awarded to other participants. Another source of funding was the Thematic Project “Toward a convergence of technologies: from sensing and biosensing to information visualization and machine learning for data analysis in clinical diagnosis”, led by Osvaldo Novais de Oliveira Junior, Raymundo-Pereira’s research advisor.”The study showed that the differences in performance between biosensors made with MAA film and 11-MUA film are not due solely to monolayer organization. Carboxylate group ionization is important. For this reason, it’s necessary to know the right conditions for formation of the film with these characteristics,” Raymundo-Pereira said.

Because MAA has proved promising for biosensor matrices, the comparison of the different preparation conditions investigated in the study can contribute to the production of high-quality films. “This knowledge can help construct other types of matrix prepared with monolayers,” Raymundo-Pereira said. “It’s now available to any researcher. As a side-effect, our own group has created another biosensor to detect the novel coronavirus.”

He stressed the importance of constructing non-invasive biosensors, especially in light of the growing use of telemedicine during the pandemic because of social distancing. “In the diagnosis and monitoring of prostate cancer, which was our proof of concept, the standard procedure is to quantify the level of prostate-specific antigen or PSA,” he said. “This entails taking a blood sample from the patient, which is an invasive procedure.

Moreover, the result isn’t always conclusive as a large proportion of false-positives result from high levels of PSA associated with inflammation of the prostate, for example. In this case, the medical recommendation is biopsy, which is even more invasive. The antigen expressed by the gene PCA3 can be detected in urine by users of a biosensor that could be sold by drugstores.”