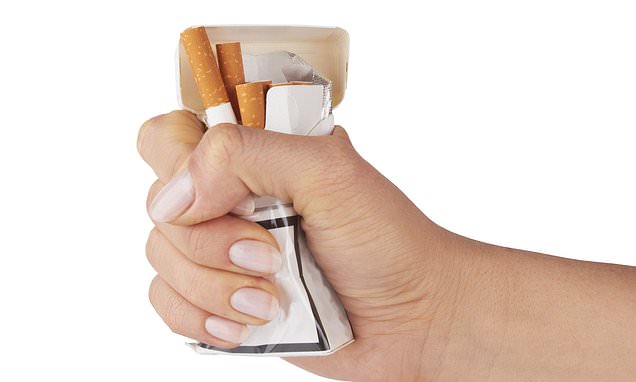 Smelling ‘pleasant’ odours such as chocolate, vanilla and lemon may reduce your cravings for another cigarette

Smelling pleasant odours such as chocolate could help reduce your cravings for a cigarette, according to a study.

Researchers asked smokers to rate their urge to light up on a scale of one to 100, while they were exposed to an array of smells.

Those who smelt something nice, such as peppermint, saw their cravings drop the most, possibly because these smells are tied to memories.

Researchers led by the University of Pittsburgh hope their findings could now form part of more effective ways to quit. 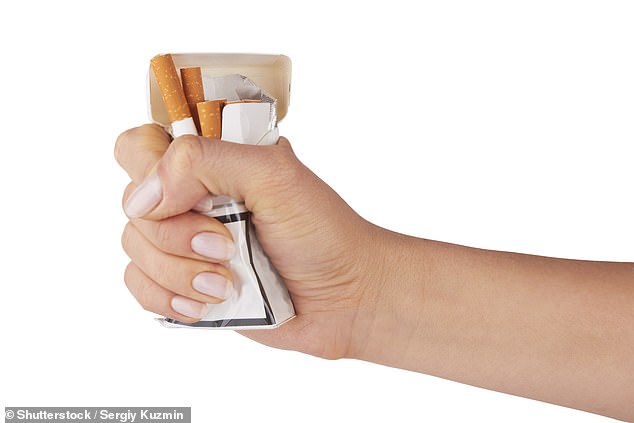 Smelling pleasant odours such as chocolate or vanilla could help reduce cravings for a cigarette, according to a study by the University of Pittsburgh

‘New interventions are urgently needed to help the millions who wish to quit but are unable.

‘Using pleasant odours to disrupt smoking routines would offer a distinct and novel method for reducing cravings and our results to this end are promising.’

The study involved 232 smokers, aged 18 to 55, who were not trying to quit at the time and were not taking nicotine any other way, such as through gum or vaping.

They were asked not to smoke for eight hours before the experiment and were told to bring a pack of their favourite cigarettes and a lighter with them.

When they arrived, the smokers rated a number of different odours that are generally considered pleasant. These included chocolate, apple, peppermint, lemon and vanilla.

They also smelled an unpleasant chemical, tobacco from their preferred brand of cigarettes and one odourless ‘blank’.

The volunteers were then asked to light a cigarette and hold it in their hands but not smoke it, for the study published in the Journal of Abnormal Psychology.

After ten seconds, the participants rated their urge to smoke on a scale of one to 100 before extinguishing the cigarette and putting it in an ashtray.

The participants then opened up a container that either contained the smell they had rated the best, the smell of tobacco or no scent at all. They sniffed it once before rating their urge to smoke again.

They continued to sniff their chosen container for the next five minutes. They rated their urge to smoke every 60 seconds.

WHAT ARE THE HEALTH RISKS OF SMOKING?

Smoking is one of the biggest causes of death and illness in the UK.

Every year around 78,000 people in the UK die from smoking, with many more living with debilitating smoking-related illnesses.

Tobacco use is the leading cause of preventable disease, disability, and death in the United States.

Each year, nearly half a million Americans die prematurely of smoking or exposure to secondhand smoke. Another 16 million live with a serious illness caused by smoking.

Some may be fatal, and others can cause irreversible long-term damage.

Smoking causes around seven out of every ten cases of lung cancer as well as causing other cancers.

It damages heart and blood circulation, increasing the risk of developing conditions such as coronary heart disease, heart attack, stroke.

Breathing in secondhand smoke, also known as passive smoking, increases your risk of getting the same health conditions as smokers.

The average craving score after lighting the cigarette was 82.13. But this dropped for all participants regardless of which smell they were exposed to.

Those exposed to their favourite odour felt the need to smoke a lot less and their craving score dropped by 19.3 points on average.

Those who chose the smell of tobacco saw their cravings drop by 11.7 points, and those who those who had the blank dropped by 11.2 points.

The nice smells may distract smokers from their cravings by reminding them of memories linked to the scent, the researchers believe.

For example, peppermint reminded some of the smokers of childhood Christmases spent at a grandparent’s home.

Scientists believe that part of the reduction seen after all three smells may be due to smokers extinguishing the cigarette and removing temptation.

Researchers were not surprised as they confirmed and expanded on results from a much smaller study they had already conducted.

More research would need to be done to confirm why smells reduce cravings and to see if this strategy could actually prove useful.

Dr Sayette said: ‘Despite disappointing relapse rates, there have been few new approaches to smoking cessation in general and to craving relief in particular.

‘Showing we can maintain the effect for as long as five minutes suggests it might offer enough time for a smoker to decide to avoid or leave their high-risk situation.’

While smoking rates have fallen over the past 50 years, around 40million Americans still smoke, according the US Centers for Disease Control and Prevention.

Most adult smokers want to quit and at least half report trying in the past year, yet half of those who try relapse within two weeks.

The number of smokers in the UK has also been decreasing over the past few decades, to a record low of just 14.9 per cent, according to the NHS.

Of those who do smoke, 60.8 per cent intend to quit, according to the Office For National Statistics.

HOW COULD VAPING BE HARMFUL?

The flavourings in electronic cigarettes may damage blood vessels in the same way as heart disease, according to research published in June.

The chemicals used to give the vapour flavours, such as cinnamon, strawberry and banana, can cause inflammation in cells in the arteries, veins and heart.

They causes the body to react in a way that mimics the early signs of heart disease, heart attacks or strokes, the study by Boston University found.

Other recent studies have also suggested smoking e-cigarettes could cause DNA mutations which lead to cancer, and enable pneumonia-causing bacteria to stick to the lungs easier.

Researchers at New York University subjected human bladder and lung cells to e-cigarette vapor, which is marketed as being healthier than tobacco.

They found the cells mutated and became cancerous much faster than expected and mice exposed to the vapour also suffered significant DNA damage.

The vapour from e-cigarettes helps bacteria which cause the condition to stick to the cells that line the airways, they said.

The effect occurs with traditional cigarette smoke and those who are exposed to air pollution high in particulates from vehicle exhausts.