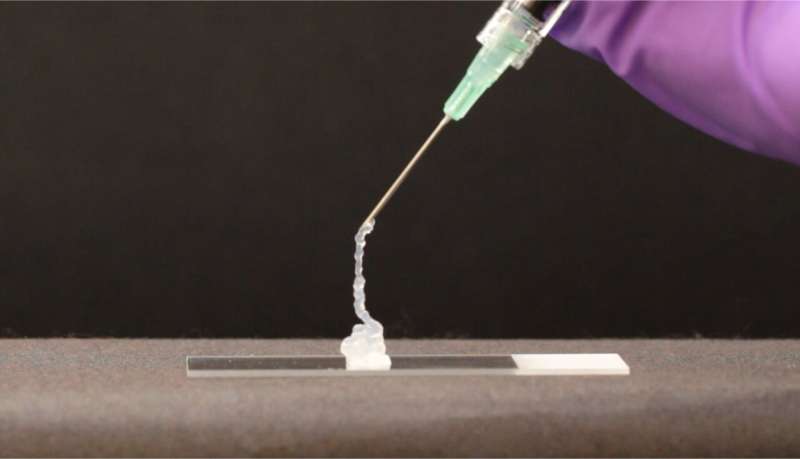 One cutting-edge cancer treatment exciting researchers today involves collecting and reprogramming a patient’s T cells—a special set of immune cells—then putting them back into the body ready to detect and destroy cancerous cells. Although effective for widespread blood cancers like leukemia, this method rarely succeeds at treating solid tumors.

Now, Stanford University engineers have developed a delivery method that enhances the “attack power” of the modified immune cells, called chimeric antigen receptor (CAR) T cells. Researchers add CAR-T cells and specialized signaling proteins to a hydrogel—a water-filled gel that has characteristics in common with biological tissues—and inject the substance next to a tumor. This gel provides a temporary environment inside the body where the immune cells multiply and activate in preparation to fight cancerous cells, according to a new study published April 8 in Science Advances. The gel acts like a leaky holding pen that pumps out activated CAR-T cells to continuously attack the tumor over time.

“A lot of the CAR-T cell field is focusing on how to make better cells themselves, but there is much less focus on how to make the cells more effective once in the body,” said Eric Appel, assistant professor of materials science and engineering at Stanford and senior author of the paper. “So what we’re doing is totally complementary to all of the efforts to engineer better cells.”

Currently, intravenous (IV) infusions are the main mode of administration for CAR-T cells. In this method, cells enter the bloodstream and flow through the entire body. But the approach is not ideal for treating solid tumors, which are often dense, exist in specific locations and have defenses to hide from and fend off immune cells.

“It’s kind of like a battle territory that’s filled with terrible things trying to fight off these T cells,” said Abigail Grosskopf, a Ph.D. candidate in chemical engineering and lead author of the study. “So the CAR-T cells have a hard time infiltrating to attack that tumor.”

To activate CAR-T cells strongly enough to eradicate a tumor, the cells must undergo prolonged exposure to a high concentration of specialized signaling proteins. Called cytokines, these proteins tell the engineered immune cells to rapidly replicate and prepare to destroy the tumor. However, if delivered systemically through an IV drip, the amount of cytokines required to launch an effective attack would be toxic to other parts of the body.

Instead, Grosskopf and her colleagues created a gel that can temporarily house cytokines and CAR-T cells near the tumor. The immune cells grow and proliferate there, inside the body, and are continuously released to bombard the cancerous growth.

The gel is made of water and two ingredients: a polymer made from cellulose, a material found in plants and biodegradable nanoparticles. When combined, the two components bind together like molecular Velcro—they want to stick together but can easily be pried apart.

“This material can be injected through small needles,” Grosskopf said. “Yet, after it’s injected, the ‘Velcro’ finds itself again and reforms into a robust gel structure.”

The gel’s mesh-like configuration is woven tightly enough to prevent the tiny cytokines from slipping out. At the same time, the structure’s connections are weak enough for the CAR-T cells to break them and wiggle free when ready to take down cancerous cells.

After determining the best gel formula to deliver the cancer treatment, the research team put its method to the test in mice with tumors.

Grosskopf found that all experimental animals injected with gel containing both CAR-T cells and cytokines became cancer-free after 12 days. She and her colleagues also tried delivering just CAR-T cells in the gel, but the tumors disappeared more slowly or not at all in some mice. Treatments delivered through an IV drip or in saline rather than in the gel were even less effective on the tumors.

Additionally, the gel did not induce adverse inflammatory reactions in the mice, and it fully degraded within the body in a few weeks.

The team also tried injecting the gel treatment farther away from the tumor—on the opposite side of the mouse’s body from the cancerous growth. Much to everyone’s surprise, all of the animals’ tumors still vanished, although it took about twice as long as when treatment was added adjacent to the tumor.

“What we were evaluating is primarily tumors that you can inject next to. But we unfortunately still can’t get to all tissues in the body,” Appel said. “This ability to inject far away from the tumors really opens the door to possibly treat any number of solid tumors.”

Appel says his lab’s next set of experiments will further explore the gel delivery method’s ability to treat faraway tumors.

Overall, this research proposes a simple and effective way to improve a promising cancer treatment.