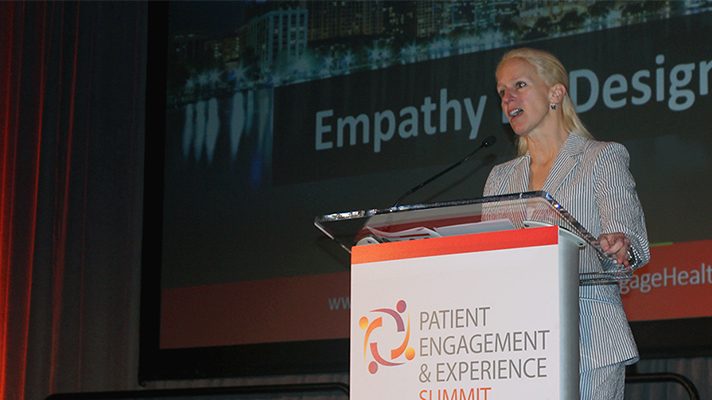 At Monday’s Patient Engagement and Experience Summit at HIMSS19, Cleveland Clinic Chief Experience Officer Dr. Adrienne Boissy took the stage to answer some attendee questions about the state of patient engagement. While the discussion was wide-ranging, an overall theme shined through: the importance of empathy. Read on for some patient engagement lessons.

Boissy said that EHRs at their best have a lot of useful data to offer physicians about their patients. But doctors have to resist the notion that the data is all they need, or is even the most important information.

“Many years ago there was a New York Times article talking about the iPatient,” Boissy said. “The EHR is now a bunch of data feeds and they termed it the iPatient. And the problem with the iPatient is it’s not actually a human being who has articulated their values and their narrative in their own words. It’s the EHR that’s just regurgitated a bunch of data points. I actually think that if we’re so good about collecting all those data points, then what makes it beautiful is I can walk into the room as a clinician and actually be a healer.”

Even so, there might be a way for the EHR to move toward being a more creative record.

“I just had a conversation with Epic last week, and I said, ‘Why isn’t there a story place?’” Boissy said. “Why isn’t there a section in Epic where you can say, ‘This is what I would say about me?’ … Where’s the part where the patient’s voice shines through?’ And, to their credit they were really receptive about hearing that.”

2. Don’t wait for reimbursement to catch up

Via HCAHPS scores, reimbursement is at least somewhat tied to patient experience. But there isn’t really a reimbursement pathway tied to engagement. This can make it challenging to make incentives align. For instance, coding requirements that a hospital have different visit types might not align with creating a usable patient experience for a telehealth program.

“We have 22,000 different visit types for patients,” Boissy said. “Guess what? You are never going to get to self-scheduling if a patient has to choose between 22,000 visit types. So the operational work that needs to occur to get it down to one visit type, a patient visit, is enormous. And yet we have to do it. We have to push and push and push. We have to be brave in that space because the reimbursement is not keeping up with the touches we actually need to make right now.”

3. Engagement isn’t always a positive experience, so listen to patients

“I was on a walk in the park and a patient came up to me and started yelling at me, one of my patients. … And what she ended up saying was, ‘I don’t like coming to your office anymore because you ask me all the validated survey questions about MS, and then every time I see I’m getting worse. I’m not coming anymore,” Boissy said. “I almost fell over, because why didn’t we think about that?”

Cleveland Clinic has learned from that experience and has added some new questions to the standard assessment.

“We should have done better,” Boissy said. “And now what we do is when patients come in, we ask them if they want to do those questions, and on the questionnaire we added, ‘What’s most important to you?’ That doesn’t seem like a big thing, but that doesn’t exist on validated surveys.”

Too many people in healthcare still think “patient portals” when they hear “patient engagement.” Boissy believes this conversation is pretty far afield of what’s important.

“I don’t understand this dialogue that a portal is engagement!” Boissy said. “And in fact when we did our engagement pilots some time ago, all I saw was ‘number of times downloaded, number of times patient logged in.’ If patient engagement is behaviors that a patient demonstrates to take maximal advantage of tools available to them to manage their health, then downloads and logins are useless pieces of information.”

5. Focus patient engagement on an N of 1

Population health and data analytics are powerful tools. But, just like EHR data, they aren’t a substitute for engagement. And whenever a patient feels like he or she is being engaged as a member of a population, rather than as an individual, it won’t be a positive experience.

6. Keep your eyes on the prize — the patient-provider relationship

“If we have a bunch of highly engaged patients and a bunch of walking dead clinicians, that is not the vision,” Boissy said.

So engagement needs to be conceived of from the start as a two-way street. But furthermore, as hospitals choose tools and platforms for engagement, that relationship needs to be the cornerstone.

“Over and over and over again, the drivers of exceptional experiences are the moments with the doctors and the nurses. There’s still something sacred about that moment,” Boissy said. “So how we’re training, how we’re teeing up, how we’re using technology to extend and support that relationship is how we should be placing our bets.”

7. Empathy is more than just listening and respect

Boissy ended her panel with a reminder that empathy is not a buzzword and not just a way of describing what a hospital is already doing.

“In the HCAHPS survey, they ask about ‘How often did we listen to you, how often did we explain things to you, and how often did we respect you?’” Boissy said. “Did anybody hear empathy in there? Well guess what? In the patient’s eyes, the most important thing is, ‘Did you care about me as a human being?’ When that gets on all the surveys we’ll be in business.”