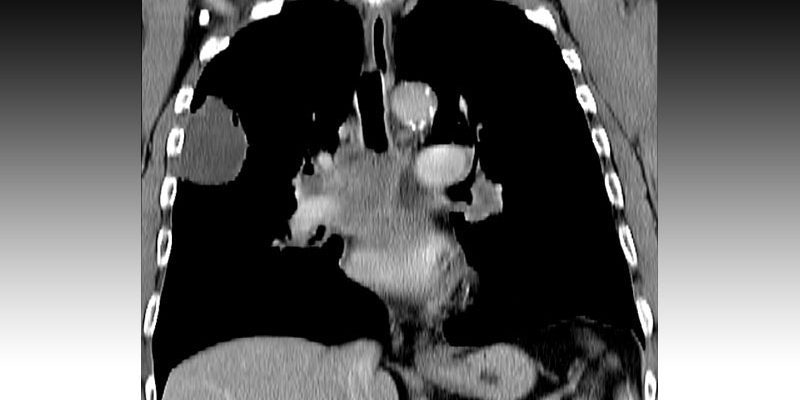 Overall survival with serplulimab, a novel PD-1 inhibitor being developed in China for extensive-stage small cell lung cancer (ES-SCLC), appears better than that seen with two immune checkpoint inhibitors already on the market for the indication. However, there are questions about the applicability of the trial results to US patients.

The findings come from the ASTRUM-005 study, which is “the first phase 3 trial demonstrating overall survival benefits of a PD-1 inhibitor in combination with chemotherapy” for ES-SCLC, said investigators led by Ying Cheng, MD, of the Jilin Cancer Hospital in Changchun, China. The study was published September 27 in the Journal of the American Medical Association.

ASTRUM randomly assigned 585 patients with ES-SCLC who had not previously received systemic therapy in a 2:1 ratio to receive either serplulimab 4.5 mg/kg or placebo every 3 weeks, along with carboplatin and etoposide, also given every 3 weeks, for up to 12 weeks. Median follow-up was 12.3 months.

The investigators say the findings support serplulimab plus chemotherapy for first-line treatment of ES-SCLC, but experts who commented on the study were skeptical.

The ASTRUM trail results would be “practice changing” if it were not for the fact that the anti-PD-L1 immnunotherapies atezolizumab and durvalumab are already approved in the US for first-line treatment of ES-SCLC in combination with chemotherapy and are considered standard treatment, they write.

With an overall survival benefit of 4.5 months, serplulimab does appear to have a slight edge on atezolizumab’s 2-month and durvalumab’s 2.4-month benefit over placebo in phase 3 testing, but comparing the trials is problematic, in part because of differences in trial populations, they comment.

In addition, almost 20% of trial participants were never-smokers, a proportion substantially higher than in previous SCLC trials, the editorialists note. The investigators attribute lung cancer among never-smokers to secondhand smoke.

Given the demographic problems, as well as the lack of comparison to standard immunotherapy/chemotherapy, the editorialists question whether “adding serplulimab to the list of approved immune checkpoint inhibitors” would “bring value” for patients with ES-SCLC.

At the moment, “there is limited biological rationale to suggest” PD-1 inhibition, rather than PD-L1 inhibition, would make a real difference for patients with ES-SCLC. It is possible that any extra benefit from serplulimab would come down to cost, but pricing hasn’t been announced, Choudhury and Riely say.

The US Food and Drug Administration granted serplulimab an orphan drug designation for SCLC in April 2022, and its maker, Shanghai Henlius Biotech, is working with the agency to submit a biologics license application for extensive-stage disease by the end of 2023.

To brighten the approval prospects, the company is planning a 200-participant trial in the US that will include Black and Hispanic patients and will compare serplulimab directly with atezolizumab, according to media reports.

Henlius is also developing serplulimab for liver, esophageal, gastric, and head and neck cancer, as well as for non–small cell lung cancer.

M. Alexander Otto is a physician assistant with a master’s degree in medical science and a journalism degree from Newhouse. He is an award-winning medical journalist who worked for several major news outlets before joining Medscape and is also an MIT Knight Science Journalism fellow. Email: [email protected]