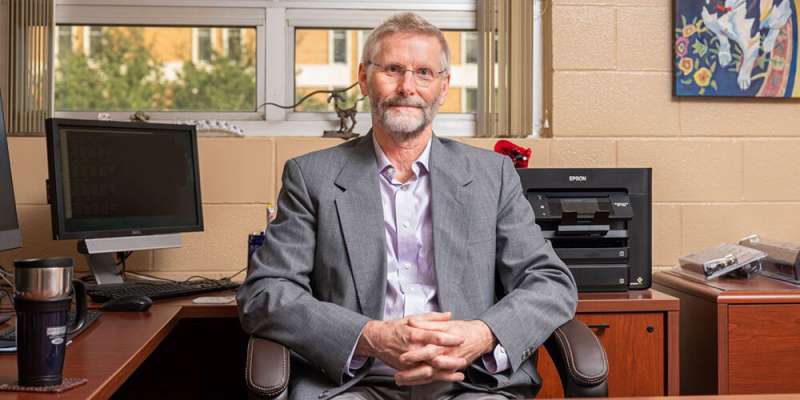 When an individual suffers from cancer, the process of programmed cell death called apoptosis does not occur normally, permitting abnormal cells to thrive.

In a new study, Clay Clark, chair and professor of biology at The University of Texas at Arlington, explores the ancestry of a class of enzymes responsible for killing cells. These enzymes, known as effector caspases, provide insight into the process of cell death and how it can be manipulated in disease states.

“If drug developers want to target a cancer cell, they could activate the caspases to perform their normal function of killing cells,” Clark said. “But we first need to isolate the caspases of cancer cells and not alter their activity in normal cells. The question is, how can we target the activity of the tumor cell without disturbing its healthy neighbors.”

The study, “Evolution of the folding landscape of effector caspases,” appears in the Journal of Biological Chemistry. In it, Clark and co-author Suman Shrestha, UTA alumnus and postdoctoral fellow at Princess Margaret Cancer Center, look to the past for answers.

Cells have had effector caspases since organisms called eukaryotes emerged more than a billion years ago. Over time, the caspases evolved from one to 12 proteins that serve various functions during cell growth and division. To understand their evolution, Clark’s laboratory used a computational method called ancestral state reconstruction to recreate a 650-million-year-old protein sequence of an ascendant of caspases 3, 6 and 7.

Caspases are the central components of apoptosis. In cancerous states, cells turn off caspases and circumvent the cell death process. A goal of Clark’s research is to understand how effector caspases work in healthy conditions. Once the proteins’ normal function is understood, Clark’s team could discover methods to activate them in disease states to destroy abnormal cells while preserving healthy ones.

By examining the ancestor’s characteristics and tracing the protein’s evolution into multiple members, Clark’s team discovered commonalities and differences among caspases 3, 6 and 7 that could allow for the isolated activation of proteins in tumor cells without disrupting the activity of healthy cells.

Morteza Khaledi, dean of the College of Science, said the results of the study will advance humanity’s battle to mitigate the effects of cancer.