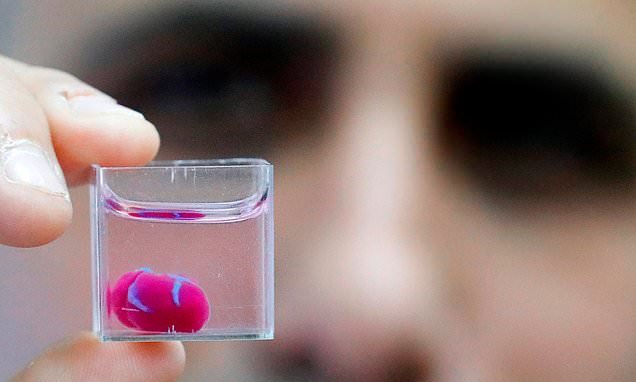 Scientists claim to have made the first ever 3D-printed heart with human tissue and blood vessels.

Although the organ is only the size of a cherry and cannot pump blood, experts said its creation is a ‘major medical breakthrough’.

The heart is believed to the be the first ever to have been printed with cells, blood vessels and chambers.

Although the hearts will need more work before they can pump blood, the scientists hope to begin trials using them within a year. 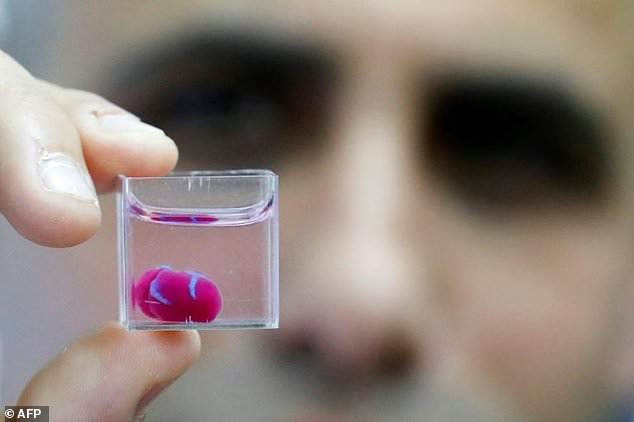 Scientists in Israel say they have produced the first 3D print of a heart with human tissue and vessels, calling it a ‘major medical breakthrough’ even though they are a long way off from creating the first hearts suitable for transplant

Researchers at Tel Aviv University in Israel unveiled their creation today and explained how it was made with human cells.

Tal Dvir, who led the project, said: ‘People have managed to 3D-print the structure of a heart in the past, but not with cells or with blood vessels.’

And he added it is ‘the first time anyone anywhere has successfully engineered and printed an entire heart replete with cells, blood vessels, ventricles and chambers’.

The organ is about the size of a rabbit’s heart and can contract like a muscle but can not do a full pumping motion.

It was made of cells that were multiplied from a sample of fatty tissue taken from a human patient.

Beginning by multiplying the cells to produce small patches of heart tissue, the scientists scaled up their operation to eventually build the whole organ.

But working out how to expand the sample of cells enough to be able to produce an entire human heart remains a challenge, they said.

And an extremely high resolution printer would be needed to print the smallest blood vessels. 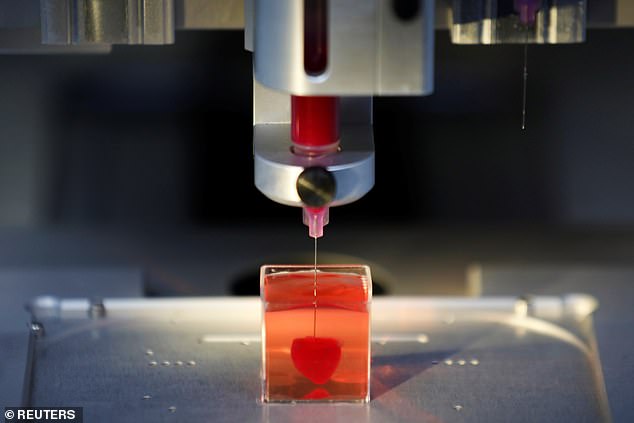 The heart was printed using cells harvested from a biopsy of a real living patient – this means, if it works, it could be tailor and made from someone’s own cells, reducing the risk of rejection 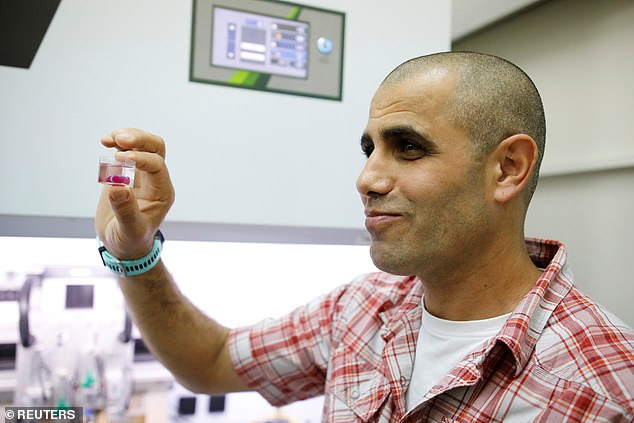 Professor Tal Dvir (pictured with the heart), from Tel Aviv University, said this is the first time scientists have managed to print a heart complete with blood vessels and human tissue 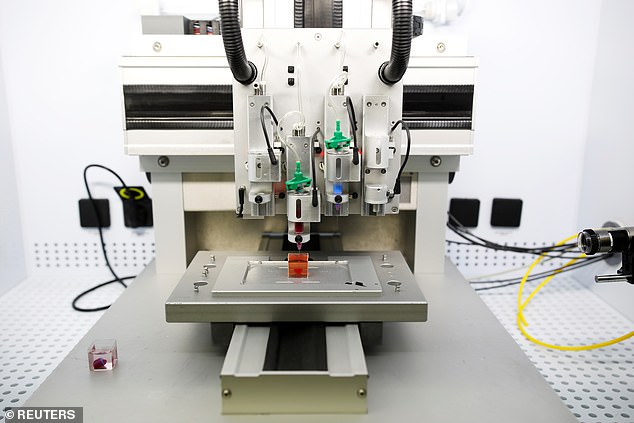 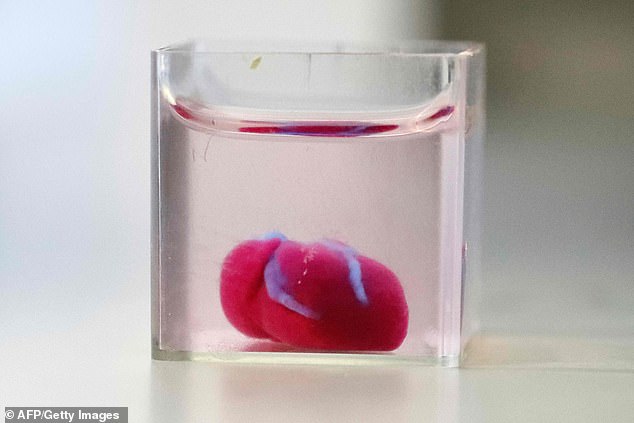 The heart created by the team in Israel was about the size of a rabbit’s heart and had its own blood vessels, which can be seen in blue in the image

In theory, the technique may one day be able to produce someone a new heart using recycled cells from their own body – reducing the risk of it being rejected.

‘Maybe, in 10 years, there will be organ printers in the finest hospitals around the world, and these procedures will be conducted routinely,’ said Professor Dvir.

But he accepts it may be safer to start transplants with an organ less crucial than a heart.

The spleen, appendix, gall bladder and kidney – and even a lung – can be removed without killing the patient, for example, so could be candidates for trials.

The next stages of the Israeli team’s research will be trying to teach the 3D-printed hearts to beat like living ones.

And then they will attempt to transplant the lab-grown organs into animals, which they hope to be able to do within a year, Professor Dvir said.

WHAT OTHER BODY PARTS CAN SCIENTISTS PRINT?

3D printing has become increasingly common in the medical world and researchers have already used it to try and create skin, spinal cells and corneas.

At Newcastle University scientists last year printed the first ever human corneas – the fronts of the eyes.

Researchers used human stem cells combined with collagen and alginate, which together turn into a strong gel, which could be used by a printer.

They say the technology could be used to produce an unlimited supply of corneas to combat a global shortage for people who need transplants.

Experts at the University of California in San Diego restored the walking ability of paralysed mice by printing a spinal cord.

They created a scaffolding for the spine, loaded with neural stem cells, into sites of severe spinal cord injury in rats.

The implants then grew new nerves and tissue which attached to the existing spine to repair it and restore muscle control.

Researchers at the University of Toronto created a skin gun.

The glue gun-like device can 3D print three layers of skin on demand to quickly treat severe flesh wounds, such as burns and gashes, which need skin grafts to repair.

Stem cells taken from a patient are plugged into the device and used to generate three sheets composed of proteins including fibrin – which helps to heal wounds, and collagen.