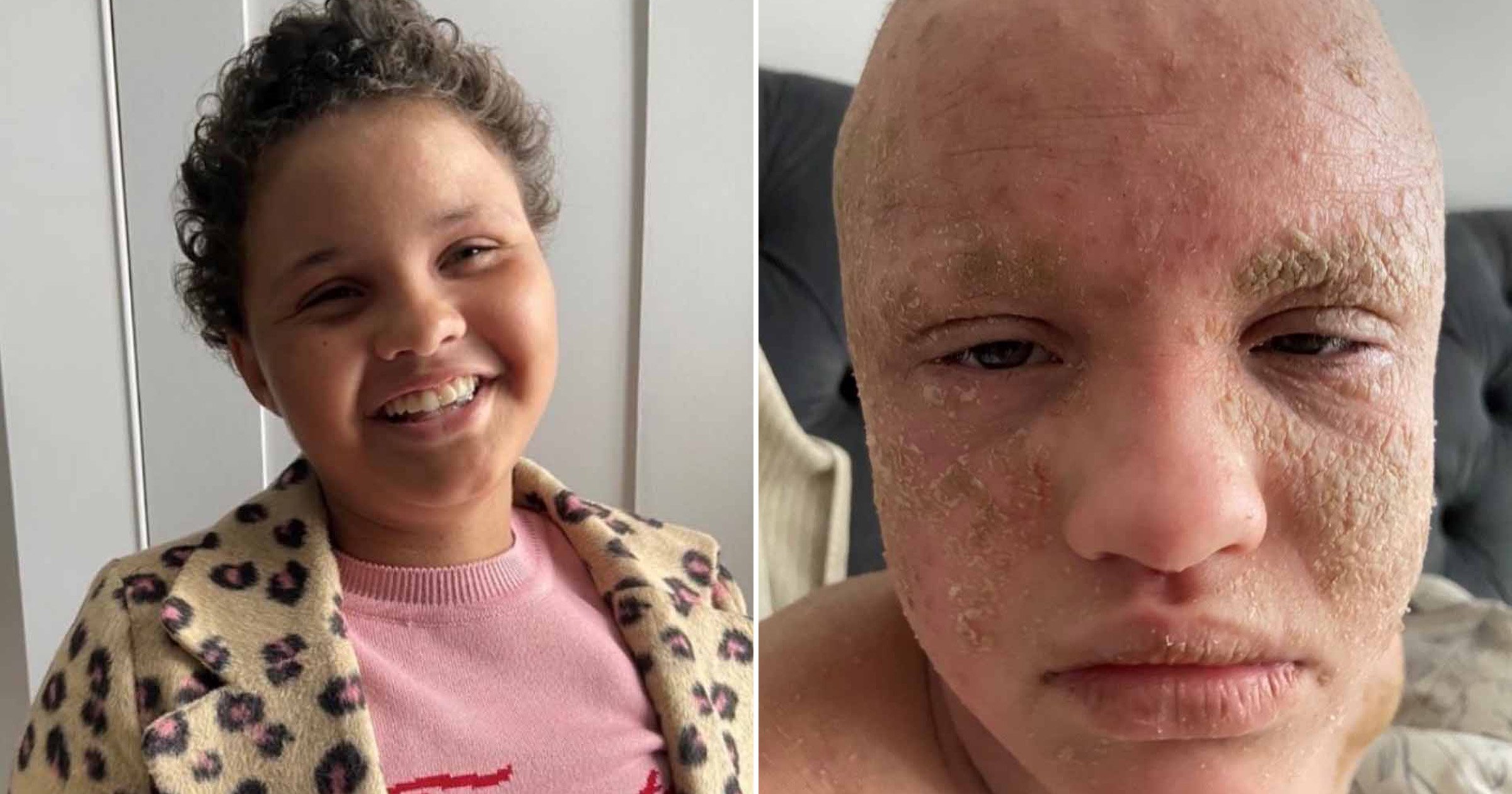 A 12-year-old girl who lost her sight in one eye after developing suspected steroid associated cataracts has finally found relief thanks to an over the counter remedy that costs less than a tenner.

Scarlet September was just six when she was first prescribed steroid creams for eczema.

When she stopped using them, she experienced topical steroid withdrawal (TSW), the symptoms of which include everything from hair loss and burning, weeping red skin, to pus-filled bumps, according to the National Eczema Society.

Her mum Sarah, 37, says Scarlet became so unwell that she missed a year of school, and was often left bedridden, suffered from red and burning skin, open, oozing sores, hair loss, insomnia.

She also lost sight in her left eye, with specialists at London’s Great Ormond Street Hospital (GOSH) saying in February that Scarlet had a ‘steroid associated cataract’.

Stay-at-home-mum Sarah, who lives in Barming, Kent, said: ‘At one point in March 2020, her neck looked like an open wound – it was so red and sore.

‘It looked like she had third-degree burns, and she couldn’t wear clothes.

‘You could see her skin was opening up and thinning where the steroids had been applied. It was horrific.

‘Then, in late 2020, she developed cataracts in both eyes and was having problems with her vision.

‘She was only 11. It was terrifying. This should not happen to a child.’

Scarlet first developed patches of eczema on her neck and eyelids after a house move when she was six years old.

She was prescribed steroid creams – a common anti-inflammatory remedy used to treat the symptoms – by her GP.

Sarah, who lives with her builder husband Christian, 38, their daughters Scarlet and Saphire, eight, and her son Louis, 17, from a previous relationship, said: ‘I believe GPs and dermatologists need to stop prescribing so many steroids.

‘Scarlet was prescribed steroids on and off, but we only used them when she was flaring.’

During a severe flare-up when she was 10, Scarlet was prescribed topical steroid creams, which Sarah applied sparingly to the back of her neck and her eyelids, as directed.

But Scarlet’s face became ‘redder and redder’, and soon the reaction spread to her whole body until ‘she was luminous red from head to toe’.

Scarlet also developed a ‘bobbly, sandpaper-like’ rash, which tests revealed to be Staphylococcus, or staph – a type of bacterial infection that lives on skin surfaces – and she was referred to a dermatologist or specialist skin doctor.

But Sarah became concerned that her daughter’s wider symptoms did not fit the profile for eczema or a staph infection and by March 2020, Scarlet was in so much distress that she couldn’t attend school.

Offered more steroids by their GP, Sarah became increasingly sceptical of them, suspecting they could be causing her daughter’s problems.

She said: ‘I saw a friend post on Facebook about her son’s skin problems, and she told me about TSW.

‘I found out so much stuff about steroids and became convinced they were making Scarlet’s condition worse.

‘With the staph infection, I’d already stopped her from using them, so she was withdrawing from steroids without me even realising.’

She took Scarlet to a dermatologist in March 2020, but Sarah was hugely disappointed when they turned out to be sceptical about the existence of TSW.

She said: ‘By this stage, Scarlet couldn’t even wear a top properly.

‘She had blankets wrapped around her.

‘I just wanted someone to help me get my daughter better.’

Later that month, at another GP appointment, a doctor finally agreed with Sarah’s suspicions that TSW was the cause of her daughter’s pain.

The existence of TSW is still debated in some medical circles, however, the Medicines and Healthcare Regulatory Agency (MHRA) recently warned practitioners to be ‘vigilant for the signs of topical steroid withdrawal’ in a directive they published on topical corticosteroids (TCS).

The National Eczema Society and the British Association of Dermatologists published guidance in January 2021 that stated: ‘Some people experience problems when they stop TCS treatment after some time. These effects are sometimes referred to as topical steroid withdrawal (TSW) syndrome.’

However, getting a diagnosis wasn’t the end of Scarlet’s journey.

She was prescribed zinc wraps to soothe her skin and sent to a local hospital for a second opinion, but there she was told the condition could be fungal and was prescribed antibiotics.

When these didn’t work, she was referred back to GOSH but was faced with a long wait to be seen thanks to the pandemic.

By this point, Scarlet’s skin was so painful that she was regularly bedridden and, despite the fact she was wrapped in zinc bandages to try and soothe the sores, she would often lie awake at night screaming in pain and would sleep during the daytime.

Ultimately, Sarah paid for an appointment with an American doctor, Dr Marvin Rapaport, co-founder of the International Topical Steroid Awareness Network (ITSAN), who prescribed Scarlet a strong antihistamine to help stop the itching and finally allow her to sleep.

‘He went through the photos of Scarlet and said it was steroid addiction and withdrawal and told us if she ceased to use them – which she already had – she would heal. He said, “Give it a year”.’

By November, when Scarlet was almost bald, Sarah was able to speak to a doctor at GOSH on the phone.

‘She was very helpful. She said, “I just want to help Scarlet,”‘ said Sarah.

‘She agreed it was TSW and told us lots of people, like Scarlet, do lose their hair from this condition.’

They began treating her with light therapy and immunosuppressants, reassuring the anxious mum that Scarlet did not have to keep taking steroids.

But soon after, Scarlet suddenly began experiencing new and even more distressing symptoms – her vision began to cloud.

Sarah said: ‘She was still bedridden and really unwell, but suddenly she was hardly watching things on the iPad.

‘I wondered if she had cataracts.’

When her left eye turned to grey ‘within days,’ Sarah rushed her to the optician, and they were again referred to GOSH and told Scarlet had a steroid associated cataract in her right eye and a dense cataract with a detached retina in her left.

Sarah said: ‘The doctor said straight away it was from steroids.’

Surgeons feared they may not be able to save Scarlet’s vision, with her consultant, a paediatric ophthalmologist and retinal surgeon, stating in a letter that there were ‘limited’ chances of recovering good vision in her left eye.

Scarlet had a lensectomy – a 90-minute procedure removing the entire lens – on her left eye in April, but as it was too damaged they could not save her sight in that eye

Fortunately, her second hour-long procedure in July, to treat the cataract in her right eye, was a success.

Sarah said: ‘They couldn’t reattach the retina as she was too scarred, but the cataract surgery in her right eye went well.

‘She can see a million times better than she could before.’

Now, after this long and painful ordeal, Scarlet is at last on the road to recovery, having replaced steroid creams with Balmonds Skin Salvation, a natural moisturiser for extra dry skin, which costs just £7.99 from a chemist.

‘She hasn’t touched any steroids since the end of February 2020,’ Sarah said. ‘You wouldn’t know she had eczema or had any of this going on. Her skin has 95 per cent healed now.

‘She uses the moisturiser every day and there’s no burning or irritation. It’s the only thing she puts on her skin to help make it softer. It’s a good, effective, safe emollient for eczema-prone children.’

However, Scarlet has had to be put back a year in school to make up for the time she missed.

Sarah said: ‘She gets very sad at bedtime when she thinks about everything.

‘But her hair is about two inches long now and she says it’s so much easier to deal with. She says, “At least I’ve got another eye.”‘

Now, Sarah is determined to raise awareness of the risks associated with prolonged use of prescription steroids, as she does not want anyone else to face the problems Scarlet has had.

She said ‘She has been incredibly brave, but no child should have to go through this.’

Meanwhile, Giles Edmonds, Specsavers clinical services director, confirmed that steroids can affect eyesight, saying: ‘Steroids have been linked to causing or aggravating serious eye problems such as glaucoma and cataracts.

‘If you begin to experience blurred vision or other problems with your eyesight, it is vital that you seek help from your optician.’

She said: ‘We’re sorry to hear about this patient’s experience.

‘All prescribers across Kent and Medway should be aware of the potential side effects of topical steroids and will make sure that patients know how to use them safely and effectively.

‘We regularly update all of our GP practices with the latest national advice around steroids, including the MHRA update published last week.’