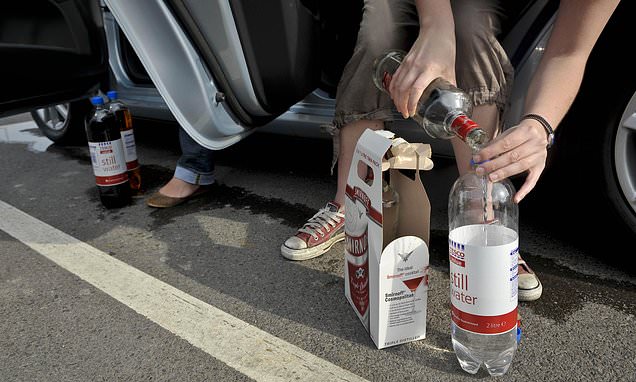 Schoolchildren from the most affluent families are TWICE as likely to drink alcohol as those from poorer backgrounds – and they use drugs more often, reveals major NHS report

Schoolchildren from affluent families are twice as likely to drink alcohol as those from poorer backgrounds.

A total of 13 per cent of children aged between 11 and 15 from more affluent families had drank while underage in the past week.

This compares with seven per cent of children from less affluent backgrounds.

Experts say one of the biggest causes of underage drinking is the example set by parents – and adults from middle-class backgrounds are heavier drinkers. 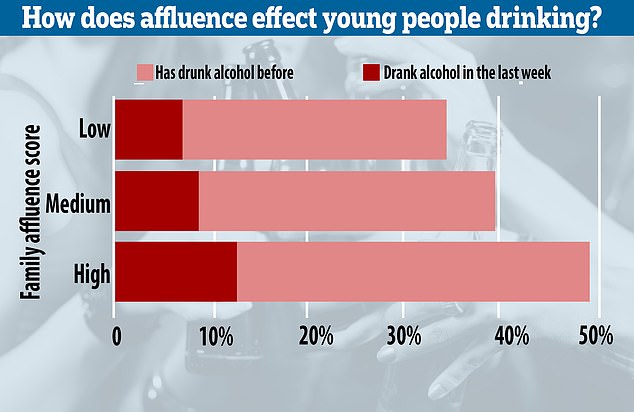 Schoolchildren from affluent families are twice as likely to drink alcohol as those from poorer backgrounds, NHS data shows 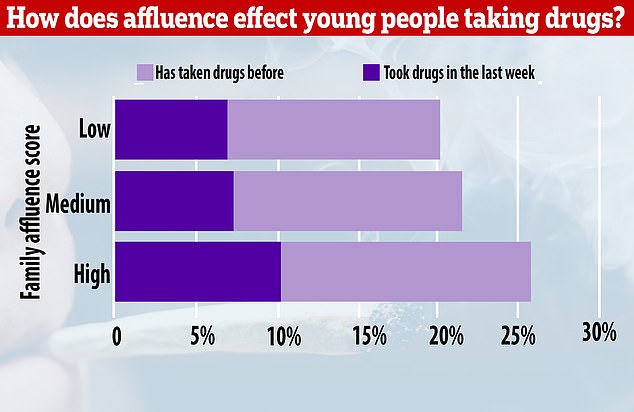 The data came from the biennial Smoking, Drinking And Drug Use Among Young People in England 2018 report.

Published on Tuesday, it reveals two per cent of the 13,664 year 7 to 11 pupils questioned had recently smoked, drunk alcohol and taken drugs.

One in ten (11 per cent) had done only one of these things and 84 per cent had done none of them.

Family affluence was measured using questions such as, ‘Do you have your own bedroom for yourself?’, ‘Does your family have a dishwasher at home?’ ‘How many computers does your family own?’

Use of cannabis has increased in recent years, NHS data shows.

The numbers have steadily increased over the seven year period, but before this, the rates had been declining since 2001, when the figure was 13 per cent.

Cannabis is the drug that pupils are most likely to have taken in the last year.

Pupils’ early experience of drug use was most likely to involve cannabis (42 per cent) or volatile substances (40 per cent).

The report said: ‘Though acceptance of drug use remains fairly low among pupils, attitudes have eased somewhat since 2011.

‘The proportion of pupils who thought it was okay to try a drug to see what’s like, or take a drug once a week, have increased for all three of the drug types asked about.’

The proportion of pupils who thought it was acceptable for someone their age to try drugs increased with age.

The number of pupils that had used cannabis in the past month has risen since 2011 from four per cent to 4.4 per cent.

The likelihood of a pupil having taken drugs in the last month was higher for pupils who from families with a higher affluence score at ten per cent, compared to seven per cent for lower affluence families.

The link between underage drinking and family affluence was not explored by the report.

The Alcohol Information Partnership said there is a lot of evidence, however, that parental approval is one of the biggest risk factors for underage drinking, as well as the example they set.

A spokesperson for AIP said: ‘It has been well documented that teenagers often mirror their parents’ behaviour.

‘So, while parents can set rules and restrictions on their children’s access to alcohol, it is crucial that the adults around them demonstrate a sensible approach to drinking.

‘Changes in pressures facing teens today has also led to fewer parents reporting they feel concerned about the risks drinking poses to young people. Correcting these perceptions and social norms are key to tackling underage drinking.’

The survey revealed a common belief held by youngsters was that pupils drank alcohol to look cool in front of their friends.

They also said it was likely because friends had pressured them into it, they wanted to appear more sociable or it gave them a rush.

Pupils who took drugs for the first time most often said they did so to ‘see what it was like’ (50 per cent).

On the most recent occasion, they wanted to ‘get high or feel good’.

NHS Digital said that drinking varied with age with 38 per cent of 15-year-olds saying they usually drank once a month compared to two per cent of 11-year-olds.

Nearly a quarter of pupils admitted to having ever taken drugs, the same as the previous survey in 2016.

The likelihood of having ever taken drugs increased with age, from nine per cent of 11-year-olds to 38 per cent of 15-year-olds, it added.

It is the first year the report has measured well-being, asking the pupils to rate their levels of happiness, life satisfaction, anxiety and how worthwhile the things they do in life were.

School pupils who have recently smoked, drunk alcohol and taken drugs are more likely to be unhappy.

More than half (51 per cent) of young people aged 11 to 15 who had recently drunk alcohol, smoked cigarettes and taken drugs experienced low levels of happiness.

The report also found that the likelihood of pupils reporting a high level of anxiety increased with the combination of behaviours.

A total of 38 per cent of those who had smoked, drunk and taken drugs reported they were very anxious compared to a quarter who had done none of them.

NUMBER OF YOUNG PEOPLE SMOKING AT LOWEST LEVELS ON RECORD

The drop in smoking rates was welcomed by the British Lung Foundation, but it said that much more needed to be done to help young people kick the habit.

Its chief executive Dr Penny Woods said it was ‘disappointing’ that only two per cent of young people who wanted to quit got help from their GP and only one per cent from a stop smoking service.

She added: ‘It’s encouraging that the number of young people smoking is continuing to decline, however it’s clear that much more needs to be done to help young people quit smoking. 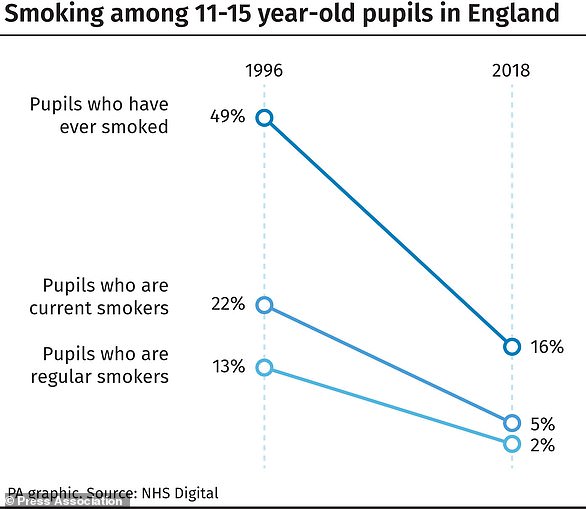 ‘Smoking is an incredibly hard addiction to quit and often starts in childhood. Many young people smoke to cope with stress and as reported, 40 per cent of young people who have smoked recently reported being unhappy.

‘This shows it’s more important than ever that young people can access the best support available to quit.

‘We must ensure all young people have access to vital stop smoking support, to protect both their physical and mental health.’

The report said that the proportion of current smokers who said they managed to buy cigarettes from shops had halved from 46 per cent in 2014 to 23 per cent in 2018.

A quarter of pupils reported they had ever used e-cigarettes in 2018 – the same as in 2016 – with regular e-cigarette use at six per cent.

‘As you would expect, some young people experiment but regular vaping among those who have never smoked is very rare and the results published today show that youth smoking rates are continuing to decline at an encouraging rate’.