In the wake of the severe acute respiratory syndrome coronavirus 2 (SARS‑CoV‑2)-driven pandemic of Coronavirus Disease 2019 (COVID-19), the global healthcare and economic setting have been thrown into chaos. Despite the rapid development and deployment of vaccines, the emergence of immune escape variants of concern of the virus (VOC), have fueled successive devastating waves of the virus, with breakthrough infections on the rise.

The Omicron variant has the highest number of mutations among all the reported variants. Many of its mutations are common to earlier immune-evading variants such as the Beta and Delta VOCs. Despite the rapid increase in case numbers to very high levels in many countries, the trend of hospitalizations and deaths in South Africa, where the variant was first detected, seems to indicate that Omicron causes less severe disease. This is supported by UK data as well.

The question as to whether this is owing to the biological characteristics of the virus variant itself, or is the effect of widespread population immunity, remains unanswered.

A new research paper posted as a preprint to the bioRxiv* server attempts to throw some light on this question by studying viral pathogenicity in golden hamsters, a valuable model for severe COVID-19 due to the development of reproducible weight loss and pneumonia after infection with the virus. 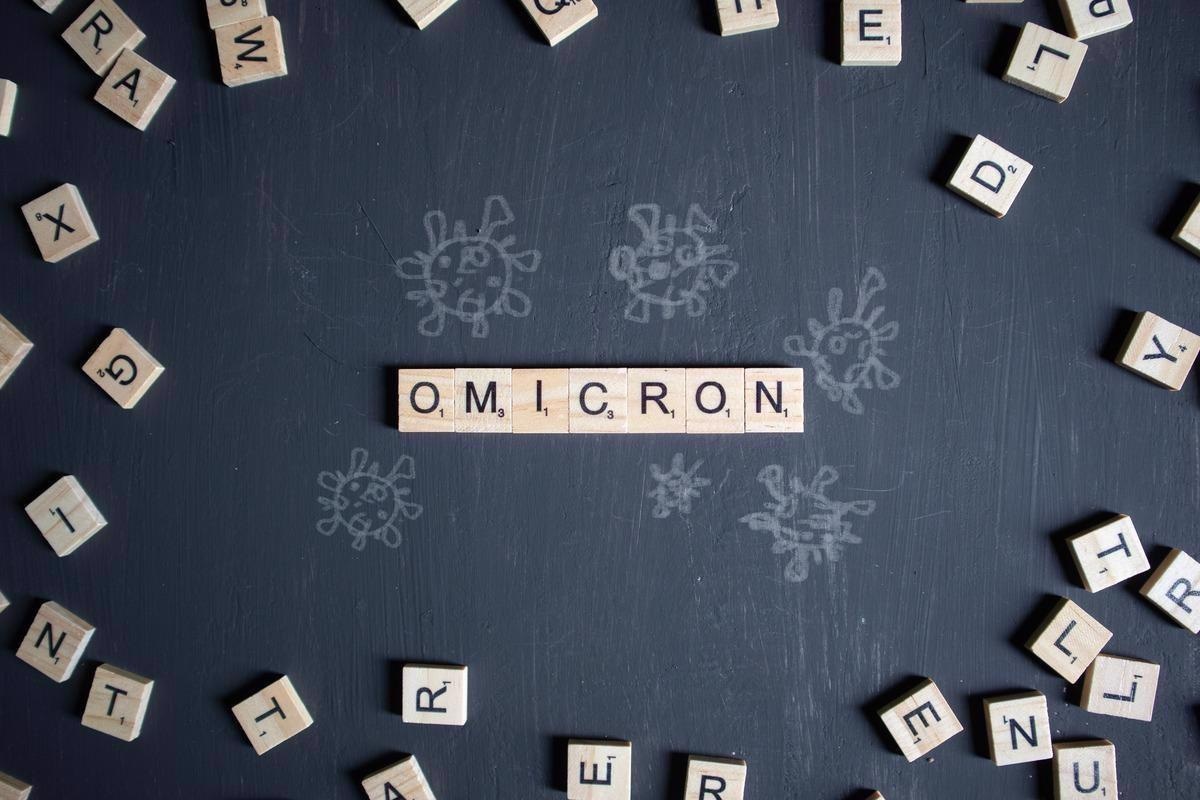 What Did the Study Show?

The scientists inoculated the hamsters with the infectious virus via the intranasal route, using VeroE6-TMPRSS2 cells. They used the ancestral Wuhan (WA), Alpha, Beta and Delta strains. Notably, the use of this cell strain led to 100-fold higher colony numbers than with VeroE6 cells. 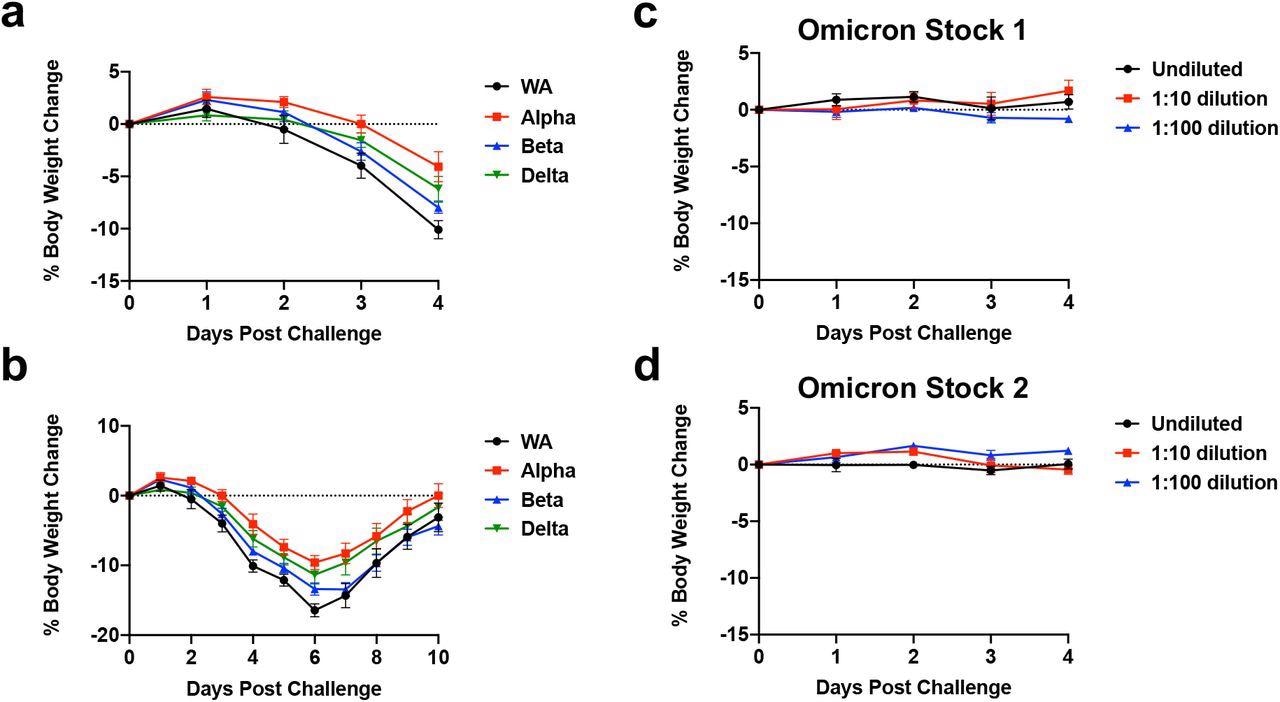 A comparison group was inoculated in the same way with Omicron at dilutions of 0, 1:10 and 1:100, at three different dosages. Two different stocks were used.

With the first stock, the three dosages resulted in a reduction of 1%, 2% and 1% by day 4, respectively. With the second, weight reduction of 1% occurred only with the highest dosage, by day 4, with no weight loss reported later on with follow-up.

These findings indicate, with the use of two different stocks of Omicron, that clinical weight loss did not occur in hamsters even with high doses of the virus.

With stock 1, the WA-, Beta-, and Omicron-infected animals showed a median viral load in the lungs of 9, 9.5 and 8.3 sgRNA copies/g, respectively. Thus, there was a drop of 0.74-log with Omicron infection compared to wild-type virus. In the lungs, the median levels of gRNA were 0.84 log lower in Omicron-infected hamsters compared with WA.

In nasal tissue, the median viral load was 6.4, 7.3, and 8.3 log sgRNA copies/g tissue with the WA, Beta and Omicron variants, respectively, indicating Omicron loads to be almost 2-log higher than with the wild-type variant. For sgRNA median levels were 1.5-log higher than for WA.

As expected, histopathologic studies show multifocal interstitial inflammation and pneumonic changes in lung tissue on day 4, with degeneration of the bronchial epithelium, loss of cilia and no nuclear polarity, with sloughing of cells, irrespective of infecting variant. Vascular involvement with inflammatory infiltrates and endotheliitis, was observable for both. 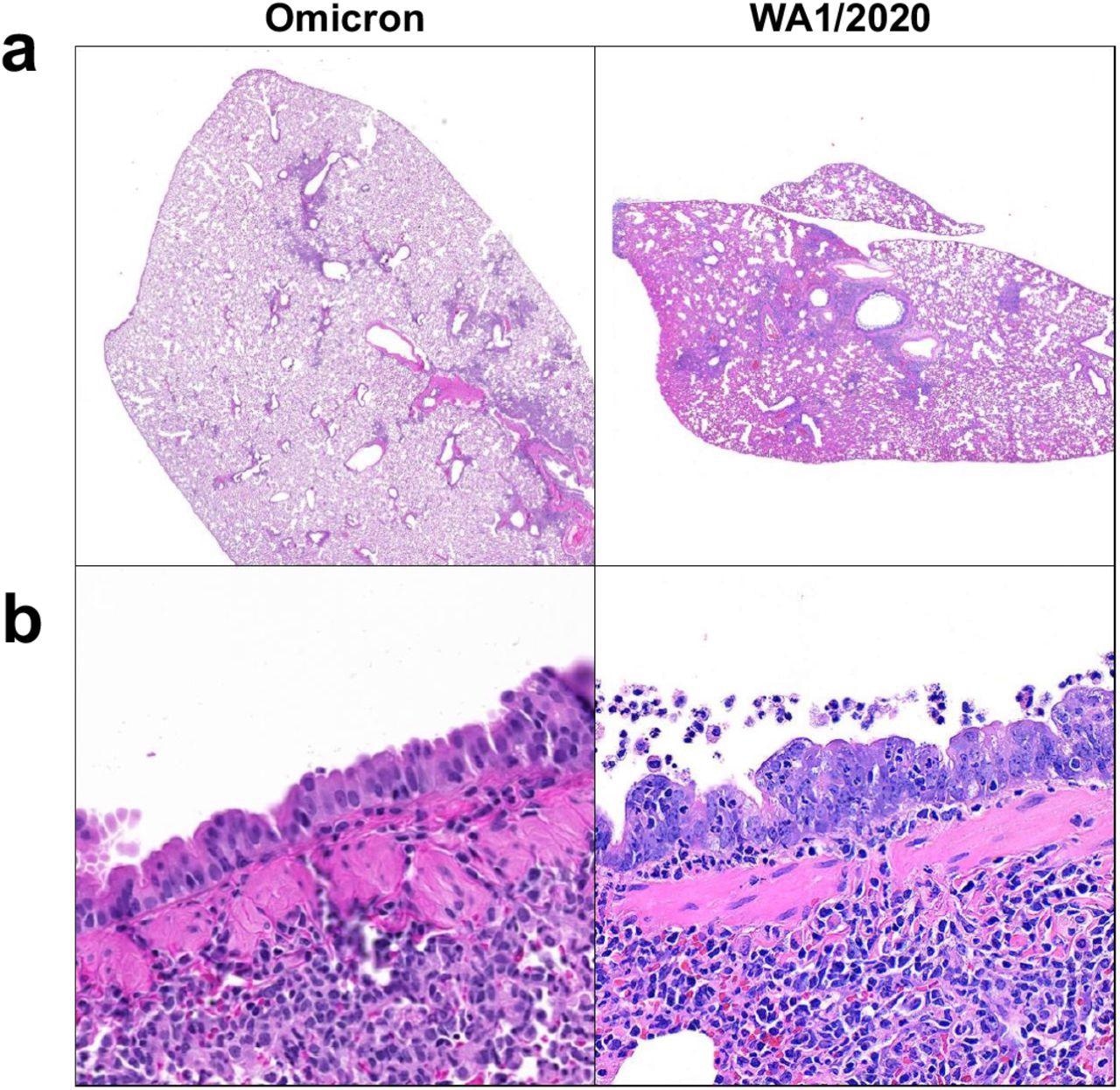 Histopathology in hamsters on day 4 following SARS-CoV-2 infection. Lung tissue from hamsters infected with SARS-CoV-2 WA1/2020 and Omicron variants was stained with H&E. a, Low power representative images of lung. There are multifocal areas of interstitial inflammation and patchy consolidation associated with bronchioles. b, Medium power representative images of bronchiolar epithelium. There is degeneration of the epithelium characterized by loss of cilia, loss of nuclear polarity, and sloughing into the airway, with consolidation in the subjacent pulmonary parenchyma.

What Are the Implications?

The Omicron appears to readily produce infection in golden hamsters over a range of dosages but rarely causes weight loss. This was so even with dosages increased 100-times above the dose of WA, Alpha, Beta and Delta, though the latter variants caused significant drops in body weight at the lower dosages.

The use of several dosages, and two stocks, confirms that these differences are real. Moreover, there was evidence that the Omicron variant replicated freely in the upper airway, and to a lesser extent, in the lungs, producing high viral loads in both tissues. Omicron infection was associated with typical features of pathology in the lungs.

These findings bear out early reports indicating that Omicron is more transmissible, but produces a milder clinical disease than earlier variants of the virus. “If confirmed, these data would have major public health implications given the trajectory of the global Omicron surge.”

Further research will be required to understand how the Omicron VOC causes weight loss in hamsters, including at the molecular level, and why it favors the upper respiratory tract over the lungs during infection.