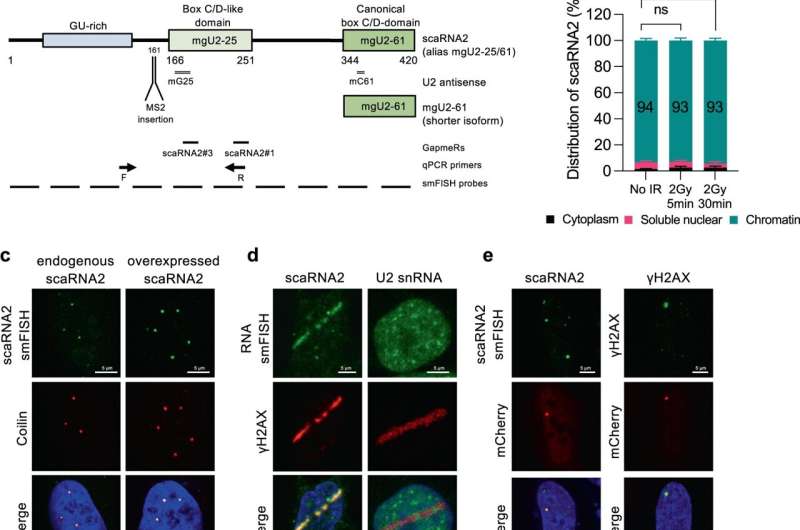 A new study from Karolinska Institutet in Sweden shows how certain RNA molecules control the repair of damaged DNA in cancer cells, a discovery that could eventually give rise to better cancer treatments. The study is published today in the journal Nature Communications.

It was long assumed that RNA molecules—basic molecules that exist in all living organisms—only participated in protein synthesis. New research demonstrates, however, that RNA molecules have a much broader function and can play a key role in the development of disease.

One such disease in cancer, where damage to our cells’ DNA can be a contributing factor. DNA damage occurs and is repaired continuously, but in some cases it can lead to carcinogenic mutations in the genome. A fundamental understanding of how our cells repair DNA is therefore key to the design of new treatments.

In this current study, the researchers examined how certain RNA molecules affected the ability of the cancer cells to repair radiation-damaged or broken DNA strings. They discovered that two molecule types—small Cajal body-specific RNA 2 (scaRNA2) and WRAP53—interacted to regulate the enzyme DNA-dependent protein kinase (DNA-PK), which in turn affected the DNA-repair mechanisms.

“Our findings show that some RNA can bind to an enzyme that repairs damaged DNA and operate like an ‘on-off’ button for this enzyme, thereby controlling DNA repair,” says the study’s corresponding author Marianne Farnebo, researcher at the Department of Cell and Molecular Biology and the Department of Biosciences and Nutrition at Karolinska Institutet. “We’ve also discovered that altered levels of such RNA leads to faulty DNA repair in cancer cells.”

The researchers hope that the results can enhance understanding of the part played by RNA in DNA repair and cancer.