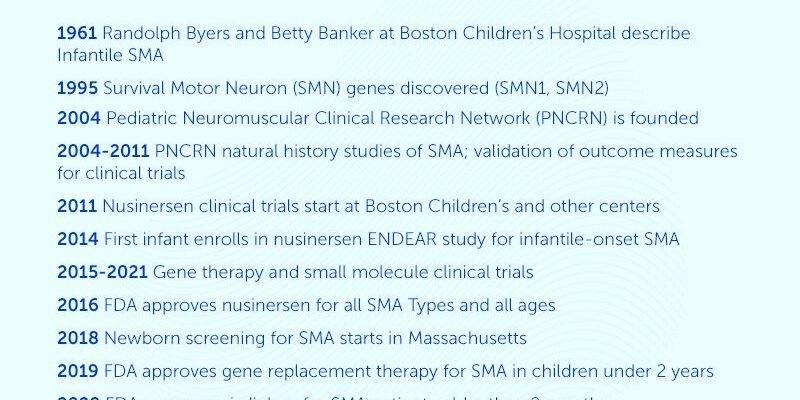 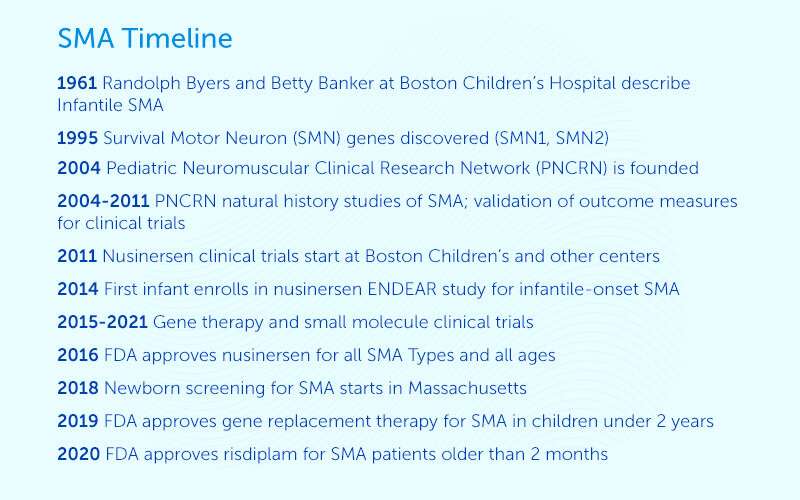 Until recently, babies and children with spinal muscular atrophy (SMA) lacked any type of treatment capable of stopping the neuromuscular disease from progressing. In SMA, damaged motor neurons in the spinal cord fail to correctly send messages to the muscle cells. As a result, infants and children with SMA may not be able to hold their head up, sit, or walk, depending on the severity of their mutation.

In the New England Journal of Medicine last week, Basil Darras, MD, of Boston Children’s Hospital and colleagues report good results with risdiplam, the latest of several disease-modifying treatments for SMA to be developed in the past decade. Unlike earlier treatments, it is a small-molecule drug that can be taken orally.

The open-label trial enrolled 41 infants at 14 centers, age one to seven months, with Type 1 SMA, the most severe form of the disease; symptoms are present within the first six months, and affected infants usually die within two to three years. As compared with untreated historical control subjects, the treated infants had improvements in motor function, including the ability to sit unassisted for a period of time. They were more likely than the controls to achieve motor milestones and lived longer than would be expected.

Boston Children’s neurologist Randolph Byers, MD, and neuropathologist Betty Banker, MD, first defined infantile SMA in 1961. Over the past decade, Boston Children’s has been heavily involved in the development and clinical testing of therapies targeting SMA’s root cause: an inability to make enough of the SMN protein needed for normal motor neuron function. The shortfall is a result of mutations in both SMN1 and its “back-up” gene, SMN2.

In 2004, Darras co-founded the Pediatric Neuromuscular Clinical Research Network (PNCRN) for SMA, a consortium of research centers including Boston Children’s, to accelerate the search for treatments.

“One site alone cannot do clinical trials for a rare disease,” say Darras, who directs the Neuromuscular Center and Spinal Muscular Atrophy Program at Boston Children’s. “Because we were able to bring the researchers together in the PNCRN, we could successfully complete the needed natural history studies and develop the outcome measures which were put in place in the clinical trials to measure drug efficacy.”

A decade of clinical success in SMA

Within seven years, the first SMA drug—nusinersen (Spinraza) – was in clinical trials at Boston Children’s and other centers. Administered into the spinal canal by lumbar puncture, nusinersen is an antisense oligonucleotide that works by directing the “back-up” SMN2 gene to make more SMN protein. Boston Children’s was the first hospital in the world to enroll an infant into the pivotal ENDEAR clinical trial in August 2014. The drug received FDA approval in December 2016, and Darras’ team has since treated more than 100 infants, children, and adults with nusinersen.

In May 2019, after successful clinical testing at Boston Children’s, a gene replacement therapy (Zolgensma) became an option for babies and children younger than two years with SMA. Given as a single, one-time infusion, the treatment delivers a correct version of the SMN1 gene. To date, the SMA Program has treated 33 babies with gene replacement therapy.

And in August 2020, the U.S. Food and Drug Administration approved risdiplam (Evrysdi) for adults and children two months and older. Again, Darras’ team was at the center of the clinical trials, leading to current NEJM report and a previous NEJM report in March 2021. Similar to nusinersen, risdiplam triggers the body to make more SMN protein, but in a different way. Instead of requiring a spinal tap, risdiplam is given as a daily oral medication. Currently, about 15 children and adults are receiving risdiplam through the SMA Program.

Darras and the SMA Program continue to research new treatments, such as the use of a monoclonal antibody to enhance the growth of muscle fibers in children with SMA. In the meantime, thanks in part to lobbying by Darras, Massachusetts became one of the first two states in the U.S. to enact newborn screening for SMA in January 2018. Today, 32 states have programs in place or in development, and all 50 states are expected to enact screening programs by 2022.