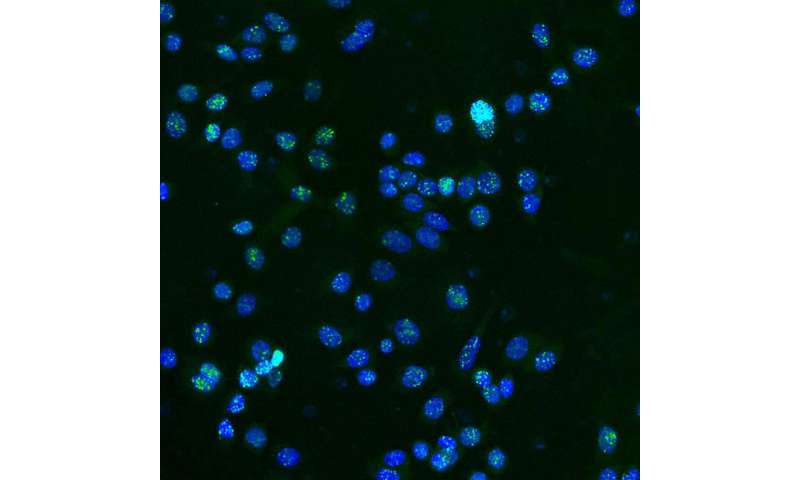 Cancer cells can turn on error-prone DNA copy pathways to adapt to cancer treatment, a breakthrough study published in the journal Science has revealed. Bacteria use the same process, termed stress-induced mutagenesis, to develop antibiotic resistance.

The cells of the human body are constantly dividing, and each time need to copy a three billion-letter DNA code with high precision to ensure cell survival. The same is not true for cancers, researchers have discovered.

A team led by Professor David Thomas at the Garvan Institute of Medical Research has shown how a broad range of cancers, including melanoma, pancreatic cancer, sarcomas and breast cancer, generate a high number of errors when they copy their DNA when exposed to cancer treatments, leading to drug resistance.

“Resistance to treatment is arguably the major issue facing patients with advanced cancers, for whom even effective treatments ultimately fail. We have uncovered a fundamental survival strategy that cancer cells use to develop resistance, and which has given us new possible therapeutic strategies,” says Professor Thomas, Garvan’s Cancer Research Theme Leader and Director of The Kinghorn Cancer Centre.

Resistance to cancer therapy affects hundreds of thousands of cancer patients every year, leading to devastating health outcomes even for the most advanced treatments.

Researchers have long known that cancer cells accumulate genetic variations that make it possible for them to evade treatment. But how this happens—and whether the process could be targeted to improve cancer treatment—has been elusive.

The authors of the current study began to investigate the underlying drivers of treatment resistance by analyzing biopsy samples from cancer patients, before and after they were treated with targeted cancer therapies. Targeted therapies block the growth of cancer by interfering with molecules that are needed for tumor growth, and are a common treatment for many forms of cancer.

They were surprised to discover that the cancer cells from patients that had received targeted therapies showed much higher levels of DNA damage than pre-treatment samples—even when these treatments did not directly damage DNA. Further, the researchers used whole genome sequencing to analyze how treatment resulted in accelerated evolution of the cancer genome.

“This process is ancient—single-celled organisms, such as bacteria, use the same process to evolve when they encounter stress in their environment.”

To pinpoint the mechanisms underlying stress-induced mutagenesis in human cancer cells, the researchers carried out a large-scale screen to silence every gene in cancer cells individually, looking to identify the specific pathways contributing to drug resistance.

When they silenced the gene for MTOR—a stress sensor protein—they discovered that cancer cells stopped growing, but paradoxically accelerated evolution in the presence of a cancer treatment.

“MTOR is a sensor protein that tells normal cells to stop growing because there is a stress in the environment. But we found that in the presence of a cancer treatment, MTOR signaling allowed cancer cells to change expression of genes involved in DNA repair and replication, for example shifting from high-fidelity polymerases, the enzymes that copy DNA, to production of error-prone polymerases,” says Dr. Cipponi. “This resulted in more genetic variation, ultimately fuelling resistance to treatment.”

The shift to low-fidelity DNA repair and replication was temporary—once cancer cells acquired resistance to a cancer treatment, they reactivated high-fidelity pathways.

“Genomic instability can itself be harmful to cells—which is why some of our chemotherapies and therapeutic radiation work. We found that once cancer cells had developed resistance to a treatment, they switched back to high-fidelity DNA polymerases to ensure the cells that had evolved resistance to treatment could survive,” explains Dr. Cipponi.

As a proof-of-principle, the researchers tested such a drug combination in a mouse model of pancreatic cancer. By combining the cancer treatment palbociclib with rucaparib, a drug which selectively targets cells with impaired DNA repair, they were able to reduce cancer growth by almost 60% over 30 days, compared to palbociclib alone.