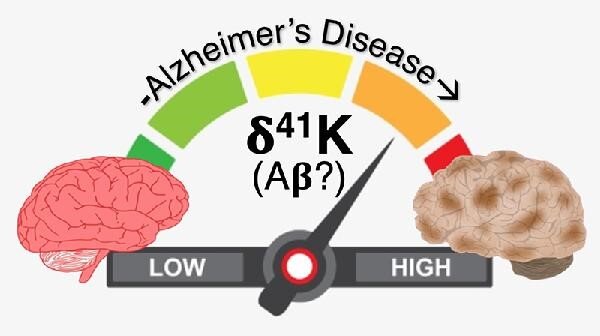 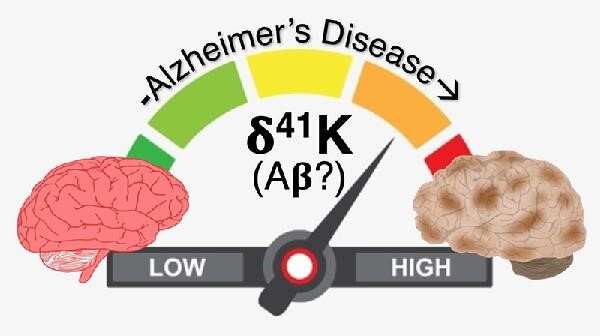 New research from a James Cook University-led study has proposed a hypothesis that higher levels of certain potassium isotopes (atoms) in a person’s bloodstream could be a way of detecting Alzheimer’s disease (AD) much sooner than current methods allow.

In a new paper for the journal Metallomics, lead author and JCU Geochemist Dr. Brandon Mahan said recent results from brain samples show marked changes in potassium isotopes that correlate with the presence of a type of protein material associated with AD which produces plaques in the brain.

The data, obtained in collaboration with the University of Bristol and l’Institut de Physique du Globe de Paris (France), analyzed brain samples from genetically modified miniature pigs, one of the best physiological matches for research on human diseases.

“We looked at potassium isotopes in the various brain regions in an animal showing preliminary signs of AD and compared this with results from one that did not. What we found was quite striking,” Dr. Mahan said.

“We’ve shown that where evidence of accumulation of amyloid beta protein material is present, brain regions show a depletion in potassium and anomalies in its isotopes.

“Factoring in previous studies and based on these new observations, we have hypothesized that the potassium isotopes disappearing from the brain are likely to reappear in the bloodstream.”

Dr. Mahan said the findings were critical and very promising with regards to the development of a non-invasive blood test that could potentially determine if a person has Alzheimer’s disease by comparing their potassium isotope levels to blood samples from individuals unaffected by the disease.

“If you can develop an early diagnostic tool, especially one that is not invasive, then you can slow down (or maybe even halt) the progression of Alzheimer’s. And that’s where isotope research is really powerful because those isotopic changes are happening more or less instantaneously,” he said.

“Because of that, it is likely this could be detected much earlier than, for example, doing a positron emission tomography (PET) scan, by which time a patient could potentially be decades into the progression of the disease.

“With currently no cure, the best way to minimize the effects of Alzheimer’s disease is to detect it as early as possible so a patient can take steps to slow the progression of the disease.”

“We’ll be exploring not only potassium isotope levels, but also copper and zinc and anything we can extract out of those samples in terms of metals and their isotopes, and then we will compare these results with the rich and layered cognitive and blood data available for these samples through the biobank,” he said.