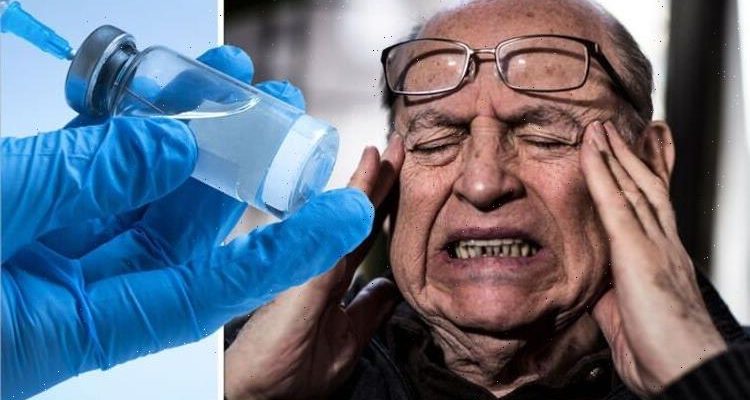 The COVID-19 vaccine has boasted a good safety profile, but given the unprecedented speed of its rollout, discoveries about its side effects are still being made. An assortment of adverse events has been reported following vaccination with the leading Pfizer-BioNTech Covid vaccine. Although neurological symptoms have generally been soft, a new report has outlined four facial side effects which have been less widely discussed.

The report states: “Due to the large numbers of spontaneous adverse event reports received for the product, the MAH has prioritised the processing of serious cases, […].”

“Most cases were received from United States, United Kingdom, Italy, Germany, France, Portugal, and Spain; the remaining were distributed among 56 other countries,” explains the report.

Facial paralysis, also known as Bell’s palsy, causes weakness that tends to be more pronounced on one side of the face.

The side effect may cause the eyelid or corner of the mouth to droop and can be treated with a 10-day cause of steroids.

The condition typically results from damage to the facial nerve, causing pain and discomfort.

The Lancet released a study earlier this year, which it concluded by saying: “Our findings suggest an overall increased risk of Bell’s palsy after CoronaVac vaccination.

“However, the beneficial and protective effects of the […] COVID-19 vaccine far outweighs the risk of this generally self-limiting adverse event.”

The terms facial paralysis and facial paresis are generally used interchangeably, but subtle differences exist between the two conditions.

Unlike facial paralysis, which causes a total loss of nerve functions, patients with facial paresis typically start to improve their facial functions earlier and can recover completely within three months.

Another facial side effect listed in the report is faciobrachial dystonic seizures (FBDS).

The condition has previously been described as an event that “often predates” cognitive impairment associated with inflammation in the brain.

FBDS are a rare form of epilepsy that causes short but frequent seizures that mainly affect the arm and face.

Facial oedema, also known as facial swelling, is puffiness caused by an abnormally large buildup of fluid in the face.

The European Medicines Agency’s safety committee, known as PRAC, has previously recommended adding the side effect to Pfizer’s product information for people with dermal fillers.

The committee said it believes there’s “at least a reasonable possibility” that vaccines cause facial swelling in people with the fillers.

Initial reports of the side effect emerged in 2021, during the phase 3 clinical trial for mRNA COVID-19 Vaccine.

Facial swelling was observed in two participants who had recently received dermal fillers.

While all four aforementioned side effects have been observed in patients inoculated with the Pfizer-BioNTech vaccine, their occurrence remains rare.