Changing definitions of obesity, altered patterns of food production and consumption, as well as changes in food preferences in westernized countries have contributed to the current global obesity pandemic among children. Given that being overweight and obese increases the risk of many metabolic conditions, including type 2 diabetes, hypertension, and cardiovascular disease (CVD), there has been an increased interest in the early detection of metabolic syndrome markers in children as young as preschoolers.

A new PLOS One study reports a correlation between parental weight and rapid childhood weight gain with increased abdominal fat at five years of age. 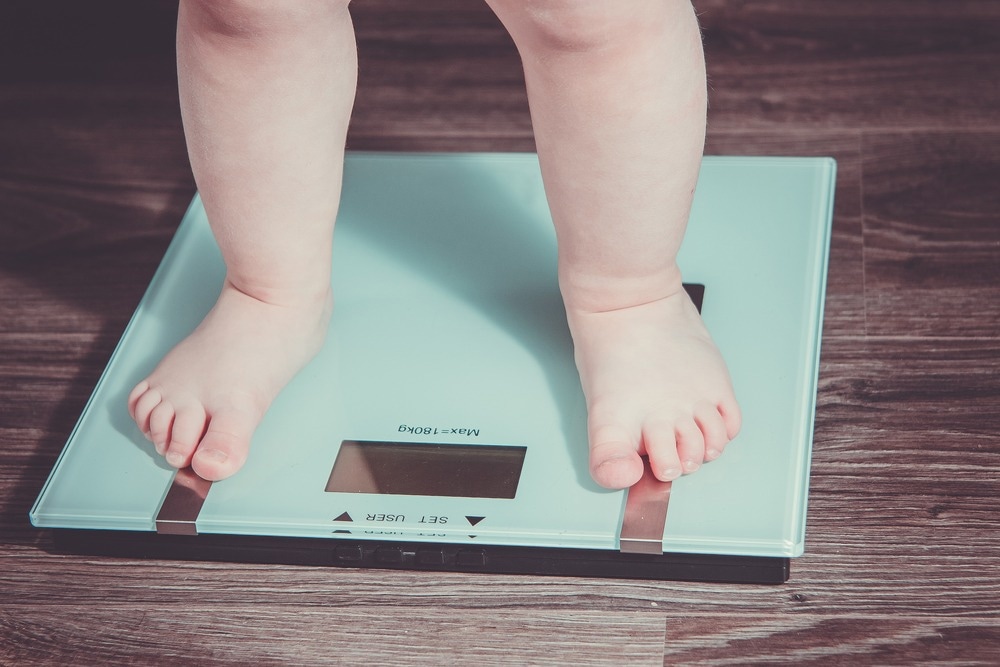 The need to identify predictors of excessive weight gain in childhood has led to increased research on markers of abdominal obesity in the pediatric population. The waist-to-height ratio (WHtR) and waist circumference (WC) has been suggested to be suitable for this purpose, as they are reliable in their correlation with cardiometabolic risk and simple to perform.

Earlier research has shown that children who rapidly gain weight during the first two years of life are more likely to become overweight and have abdominal obesity as adults.

Several reasons have been suggested for this association, including the increased protein and sugar content of infant formula as compared to breast milk, the volume of milk ingested per feed, feeding on schedule, over-feeding risk, and bottle emptying by the infant, all of which precede rapid weight gain (RWG) in infants. This could also affect the gut microbiome composition.

Low birth weight and maternal weight gain in pregnancy are other risk factors for abdominal obesity in children between the ages of two and nine. High body mass index (BMI) pre-pregnancy is another risk factor, as is increased television watching and lower socioeconomic status.

The current study is among the few that examines children below six years of age to attempt to identify risk factors for abdominal obesity.

The study included a cohort of Swedish preschoolers as part of the Halland Health and Growth Study (H2GS), which included over 2,600 children born between October 1, 2007, and December 31, 2008, in Halland, Sweden. The current study included 1,540 children.

According to the WHtR, which is calculated as WC (cm)/height (cm) transformed to sex- and age-specific standard deviation scores (SDS), 15% of children at five years of age had a value greater than or equal to one, as compared to 85% with a value less than one. Children with increased waist girth at five years of age were more likely to gain weight rapidly in the first six months of life, as well as have heavier mothers and fathers before conception.

In fact, RWG in the first six months of life doubled the risk that WHtR would be above one at five years of age. While RWG between six and 12 months, milk cereal consumption at two years, and bottle feeding in the first two years of life were also risk factors for a higher WHtR at five years, this effect was not reported after accounting for other confounding factors.

Children with RWG in the first year of life were twice as likely to experience abdominal obesity at five years of age. Higher maternal pre-pregnancy BMI also had a small effect, as it increased the risk by about 10% for higher WHtR and abdominal obesity in children at five years of age. Paternal BMI similarly increased the risk, but only for WHtR.

Early RWG, higher BMI before pregnancy, as well as higher paternal BMI are associated with a greater waist girth for height. RWG throughout the first year of life, along with higher pre-pregnancy BMI, increased the risk of being overweight or obese at five years of age.

Similar findings have been reported in children as young as two years and, along with the current study, support the hypothesis that RWG predicts later health risks through its role in abdominal obesity.

Infants carry mostly subcutaneous fat; however, in the second year of life, fat mass increases mainly in the visceral area within the abdomen. This is also the site of fat storage in children who show RWG in the first two years of life. Older children have also been thought to gain abdominal fat when they become obese.

Our results indicate that the first six months of life is a crucial period that needs further examination regarding these associations.”

Further studies will be required to validate and elucidate how maternal BMI pre-pregnancy is associated with a greater risk of increased waist girth and overweight or obesity in young children. Moreover, researchers will need to determine whether the risk factors identified in this study are also linked to excessive weight gain and abdominal obesity in children six years and older.

The current study also reports that the aforementioned factors are more important than bottle feeding or milk cereal consumption in infants, though these have been linked to obesity in other studies. This association may be indirect; thus, follow-up studies are needed to confirm the role of early feeding practices in later-life weight gain.