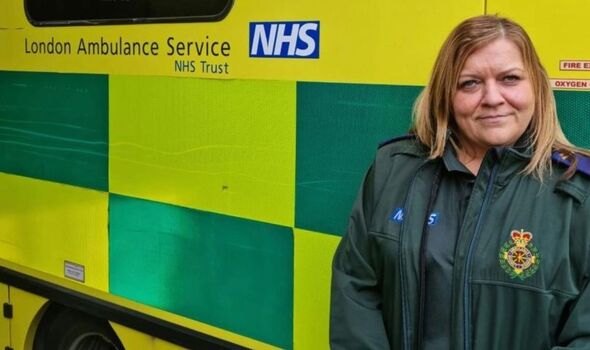 A paramedic has told how she spends, on average, “five to six hours” of her shift waiting with patients before a handover takes place – the official target is 15 minutes.

Julie Cunanne, who has been an emergency medical technician for 26 years, spoke ahead of today’s strike, December 21, claiming it was long overdue.

The 49-year-old who works with the London Ambulance Service told MyLondon: “We were never caring for patients in corridors a few years ago. What we are seeing now is worse than during the pandemic.”

She said emergency care staff are “tired of apologising to patients” for the wait time.

Paramedics have previously stated that they are bracing for criticism for striking as the NHS prepares for a difficult winter, but that patients are already at risk due to “years” of ambulance services being underfunded and understaffed, and that conditions will worsen if they do not strike.

Julie, who is also a UNISON union rep, explained the reasons she will not be going on shift, insisting that it feels like a last resort after years of perceived decline.

She said ambulance staff are often left waiting their entire shift outside A&E, caring for patients in ambulances and corridors, as there is no space in the hospital to hand them over.

The delays are often put down to a shortage of social care beds, meaning people who are ready to leave the hospital are stuck there, even when they no longer require emergency care.

Julie said: “What we are seeing has built up over quite a number of years but we are now at the point where it’s horrendous.

“Patients are sitting in corridors and trolleys for hours.

“On average we are waiting five to six hours of our shift outside a hospital.

“You’re there monitoring them, making them a cup of tea even, explaining why it’s taking so long.

“You feel guilty because you know those calls are coming in one after another and we can’t help.”

The target for handover 15 minutes and long waits can cause a patient’s condition to significantly deteriorate.

It also means ambulance crews are unable to get back on the road to attend other calls.

Julie added that the delays are having huge knock-on effects on staff morale.

She said: “The retention of staff is really hard- they didn’t come to work to just constantly be apologising to patients on doorsteps.

“None of us want this strike action to happen and we don’t want any harm to come to any patients so that’s why we are providing the most life-threatening calls.

“Our dispute isn’t with patients but its with the government.”

All category one calls – the most life-threatening, such as cardiac arrest – are still being responded to.

Some ambulance trusts agreed exemptions with unions for specific incidents within so-called category two, which covers serious conditions such as stroke or chest pain.

In London, the walkout only involves members who staff ambulances and other response vehicles, but not staff in the 999 or 111 control centres.

LAS said patients whose conditions are not life-threatening are unlikely to get an ambulance today.

Health Secretary Steve Barclay met union representatives on Tuesday afternoon, December 20, but discussions around pay were off the table as the Government sought reassurances over strike cover.

After the meeting with unions, Mr Barclay tweeted: “I hugely value the work of our NHS staff & it’s disappointing some union members are going ahead with further strike action – my door remains open to further talks.

“Unions have called for industrial action to cause maximum disruption & inevitably this will have an impact.

“My priority remains patient safety. We have contingency plans in place & I have met with ambulance union reps today urging them to honour their commitment to provide responses to life-threatening emergency calls.”