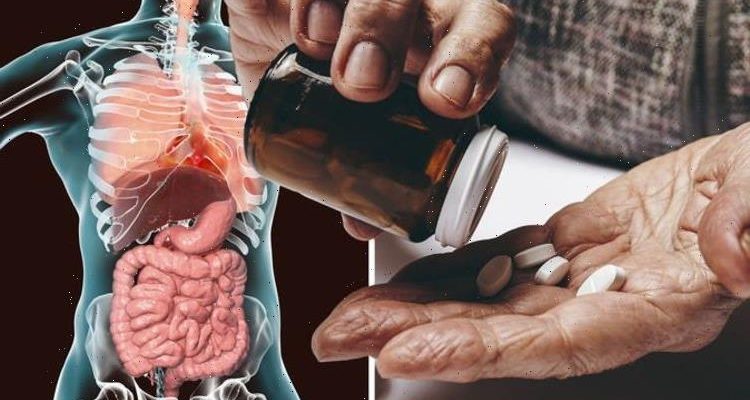 The ubiquity of pain relief drugs is a testament to their good safety profile. Taken in small doses, non-steroidal anti-inflammatory drugs (NSAIDs) are widely considered free of danger, provided that your health is in good shape. When taken for prolonged periods, however, the drug’s safety has been called into question. One recent study suggested that NSAIDs may also cause complications when taken alongside SSRI antidepressants, by increasing the chances for intestinal bleeding.

NSAIDs are popular because they’re effective across an array of ailments, such as chronic arthritis, headaches and fever.

According to the NHS, the drugs – which includes ibuprofen and aspirin- are available as tablets, capsules, creams and gels.

Is it estimated that more than 30 million people take over-the-counter and prescriptions for NSAIDs every day.

But according to a 2021 review, taking NSAIDs pain medications alongside SSRI antidepressants could significantly increase the risk for gastrointestinal bleeding.

READ MORE: Heart attack: Painkiller could be increasing your risk

The findings, which stem from 10 studies involving 6,000 participants, were presented at the Annual Scientific Meeting & Postgraduate Course of the American College of Gastroenterology.

Doctor Syed Alam, chief resident in internal medicine at Creighton University School of Medicine in Omaha, noted: “When adding SSRIs to patients already on NSAIDs, the odds of developing an upper gastrointestinal bleed increased by 75 percent.”

The health expert continued: “The risk of upper gastrointestinal bleed by adding an SSRI to an NSAID needs to be discussed between the patient and physician.

“When possible, it is best to reduce or discontinue NSAIDS prior to starting an SSRI in order to minimise upper gastrointestinal bleed risk.”

Symptoms of gastrointestinal bleeding can manifest in varied ways, but it usually entails a marked change in the appearance of stool.

Stool may become black and tarry, and bright red blood may appear on toilet tissue after using the toilet.

The researchers of the review said the increased risk of bleeding in the upper gastrointestinal tract was likely to be the result of an interaction between the two drugs.

NSAIDs are known for inhibiting the production of prostaglandins, which protects the gastrointestinal tract.

SSRIs on the other hand, inhibit the production of platelets in the blood, which are critical for clotting.

Doctor Elena Ivanina, director of neuro-gastroenterology and motility at Lenox Hill Hospital in New York City, explained that signs of bleeding may not always be blatant.

The health expert noted: “Some bleeding […] may be microscopic and not seen; therefore, symptoms of anaemia such as fatigue, shortness of breath on exertion or lightheadedness may signal blood loss as well.”

Doctor Elena Ivanina explained that SSRIs increase stomach acidity, which results in the formation of peptic ulcers and increases the risk of gastrointestinal bleeding.

Other symptoms of gastrointestinal bleeding include abdominal cramping, paleness, vomit that may look like coffee ground, weakness and fatigue.

Patients should always discuss their medications with a doctor first, as GPs can offer guidance to those who may need to combine drugs.

The NHS confirms: “It’s a good idea to ask a pharmacist or doctor for advice before taking an NSAID.”