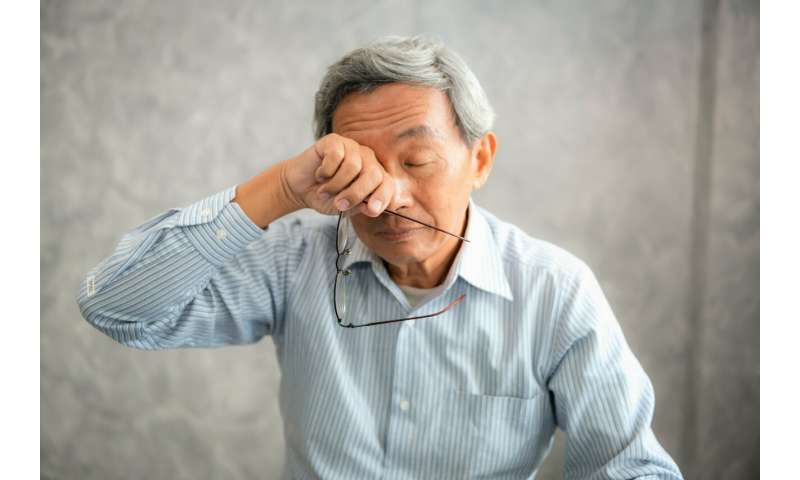 Adults with obstructive sleep apnea (OSA) who experience excessive sleepiness while awake appear to be at far greater risk for cardiovascular diseases than those without excessive daytime sleepiness, according to new research published online in the American Thoracic Society’s American Journal of Respiratory and Critical Care Medicine.

In “Symptom Subtypes of Obstructive Sleep Apnea Predict Incidence of Cardiovascular Outcomes,” Diego R. Mazzotti, Ph.D., and co-authors report on a study of adults with moderate to severe OSA who were categorized into four subtypes according to the symptoms they report: disturbed sleep, minimally symptomatic, moderately sleepy and excessively sleepy.

Previous studies have linked OSA and cardiovascular disease. To understand this association better, researchers have begun to categorize patients with OSA based on their symptoms.

“Multiple studies from our group have shown that patients with moderate to severe OSA throughout the world can be categorized into specific subtypes based on their reported symptoms,” said Dr. Mazzotti, lead study author and a sleep researcher at the University of Pennsylvania. “However, until now, it was unclear whether these subtypes had different clinical consequences, especially in regard to future cardiovascular risk.”

The current study analyzed data from 1,207 adults participating in the Sleep Heart Health Study, available from the National Sleep Research Resource. Patients were 40 years old or older at enrollment and were followed for nearly 12 years. The patients had moderate to severe OSA, which was defined as having at least 15 episodes per hour while sleeping when they stopped breathing (apnea) or had reduced breathing (hypopnea). The metric is known as the apnea-hypopnea index, or AHI.

Participant-reported symptoms, such as difficulty falling and staying asleep, snoring, fatigue, drowsy driving and daytime sleepiness, and responses to a widely used questionnaire called the Epworth Sleepiness Scale were used to determine the patient’s subtype.

The study found participants exhibiting the excessively sleepy subtype were:

The authors said that their study indicates the increased risk of cardiovascular disease associated with OSA appears to be driven by patients in the excessively sleepy subtype.

Given the observational study design, they could not prove that excessively sleepy subtype was a causal factor for cardiovascular disease. Ultimately, excessive sleepiness could be a “surrogate marker of underlying cardiovascular risk pathways,” they wrote.

However, the authors demonstrate that the association is independent of a number of demographic and health factors that might have biased results, including age, body mass index , smoking, diabetes, hypertension, cholesterol and medications.

The authors suggest their findings should guide future research studies. For instance, the researchers believe that studies of the cardiovascular benefits of continuous positive airway pressure, or CPAP, treatment for OSA should focus on the excessively sleepy subtype, who are likely to benefit the most from what is considered the gold standard OSA treatment.

“Even without further research, clinicians should recognize that patients with OSA who complain of feeling tired when they wake up and sleepy during the day and have a high score on the Epworth Sleepiness Scale are at greater risk for cardiovascular disease,” Dr. Mazzotti said.