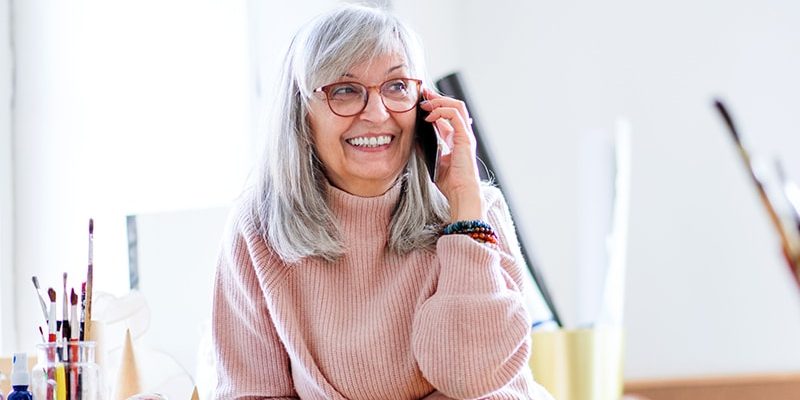 A new UK study shows no link between brain tumors and cell phone use, even among individuals who used their phones every day and/or had used them for over 10 years.

However, an important limitation of the study is that it involved only women who were middle-aged and older; these people generally use cell phones less than younger women or men, the authors note. In this study’s cohort, mobile phone use was low, with only 18% of users talking on the phone for 30 minutes or more each week, they note.

The results were published in the Journal of the National Cancer Institute.

This study is a “a welcome addition to the body of knowledge looking at the risk from mobile phones, and specifically in relation to certain types of tumor genesis. It is a well-designed, prospective study that identifies no causal link,” commented Prof Malcolm Sperrin from Oxford University Hospitals, who was not involved in the research.

“There is always a need for further research work, especially as phones, wireless, etc, become ubiquitous, but this study should allay many existing concerns,” he commented on the UK Science Media Centre.

Concerns about a cancer risk, particularly brain tumors, have been circulating for decades, and to date, there have been some 30 epidemiologic studies on this issue, as previously reported by Medscape Medical News.

In 2011, the International Agency for Research on Cancer (IARC) announced that cell phones are “possibly carcinogenic.” That conclusion was based largely on the results of the large INTERPHONE international case-control study (Int J Epidemiol. 2010 Jun;39:675-94) and a series of Swedish studies led by Hardell Lennart, MD.

In the latest article, the UK researchers suggest that a “likely explanation for the previous positive results is that for a very slow growing tumor, there may be detection bias if cellular telephone users seek medical advice because of awareness of typical symptoms of acoustic neuroma, such as unilateral hearing problems, earlier than non-users.

“The totality of human evidence, from observational studies, time trends, and bioassays, suggests little or no increase in the risk of cellular telephone users developing a brain tumor,” the UK researchers conclude.

Commenting on the UK study, Joachim Schüz, PhD, branch head of the Section of Environment and Radiation at the IARC, noted that “mobile technologies are improving all the time, so that the more recent generations emit substantially lower output power.

The UK study was conducted by researchers from Oxford Population Health and IARC, who used data from the ongoing UK Million Women Study. This study began in 1996 and has recruited 1.3 million women born from 1935 to 1950 (which amounts to 1 in every 4 women) through the UK National Health Service (NHS) Breast Screening Programme. These women complete regular postal questionnaires about sociodemographic, medical, and lifestyle factors.

The answers indicated that by 2011, the majority of women (75%) between the ages of 60 and 64 years used a mobile phone, while just under half of those aged between 75 and 79 years used one.

These women were then followed for an average of 14 years through linkage to their NHS records.

The researchers looked for any mention of brain tumors, including glioma, acoustic neuroma, meningioma, and pituitary gland tumors, as well as eye tumors.

During the 14 year follow-up period, 3268 (0.42%) of the participants developed a brain tumor, but there was no significant difference in that risk between individuals who had never used a mobile phone and those who were mobile phone users. These included tumors in the temporal and parietal lobes, which are the most exposed areas of the brain.

There was also no difference in the risk of developing tumors between women who reported using a mobile phone daily, those who used them for at least 20 minutes a week, and those who had used a mobile phone for over 10 years.

In addition, among the individuals who did develop a tumor, the incidence of right-sided and left-sided tumors was similar among mobile phone users, even though mobile phone use tends to involve the right side considerably more than the left side, the researchers note.

The study was funded by the UK Medical Research Council and Cancer Research UK.