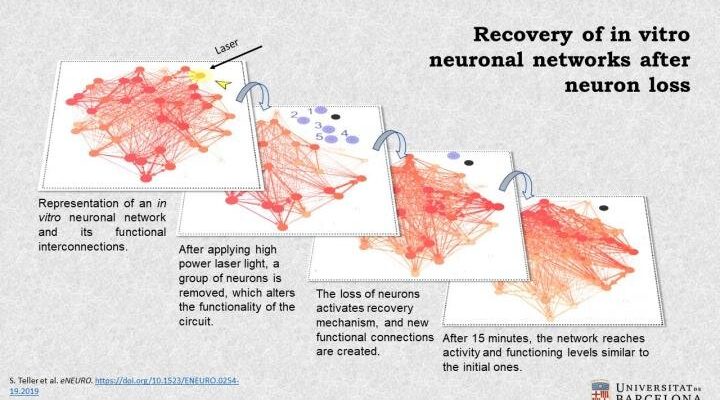 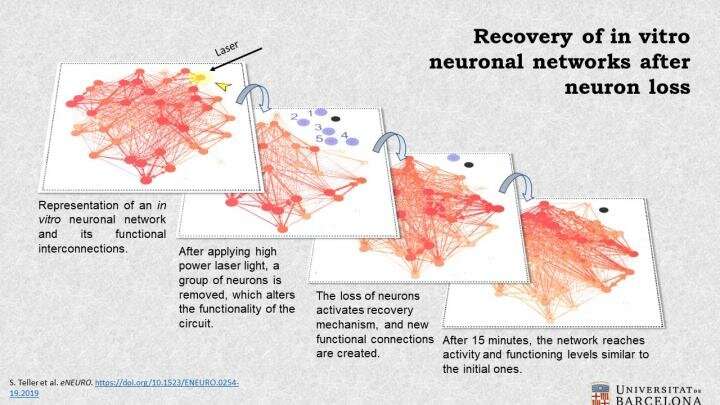 A multidisciplinary study led by UB researchers has developed a new experimental tool that enables the application of focalized damage on an in vitro neuronal network of only a few millimetres and record the evolution of the whole network. The objective is to understand the response mechanisms that take place in the brain neuronal circuits, and which prevent a total propagation of the damage while they recover the functionality of the affected circuits. One of the main conclusions is that the network quickly activates self-regulation mechanisms that reinforce the existing connections and restore the functionality of the circuit.

The study, published in the journal eNEURO, “shows the great ability of neuronal networks to self-regulate and self-modulate to respond to sudden changes or severe alterations; it is also a good example of the importance of modeling neuronal networks as a complex system, where the whole is richer than the sum of its parts,” notes Soriano.

The brain, and in general biological neuronal networks, has response mechanisms towards neuronal loss caused by damage or by a disease. In stroke, for instance, loss of blood supply causes the death of a focalized group of neurons and the alteration of the function of damaged neuronal circuits which, at the same time, alters the function of the neighboring circuits, potentially starting an avalanche of deterioration. Understanding how these mechanisms work at a network level is intricate due to the sheer size of the brain and the intrinsic difficulty of monitoring in detail the evolution of a great number of neurons before and after the damage. This difficulty can be addressed through the design of in vitro models such as the one proposed by the researchers.

In the experiments, researchers recorded the activity of the whole neuronal network to set their characteristic functionality. They next used a high-power laser to remove a group of neurons and, then, they recorded the network again, to monitor its development over time.

Researchers saw that the closest group of neurons to the affected area loses activity immediately, but it regains activity gradually thanks to the action of the whole network. “Surprisingly, in only fifteen minutes this group reaches activity levels that are similar to the ones from before the damage took place, despite having lost a significant number of impulses from the affected area,” says Soriano. “Since fifteen minutes are not enough -continues the researcher- to set new connections, we conclude that the network acts by reinforcing the existing connections, re-driving the flow of neuronal stimuli to the neighbors of the affected area, preventing their deterioration from happening, and therefore, a progressive collapse of the network.”