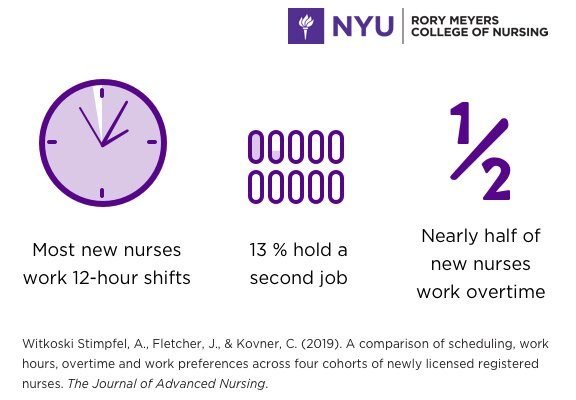 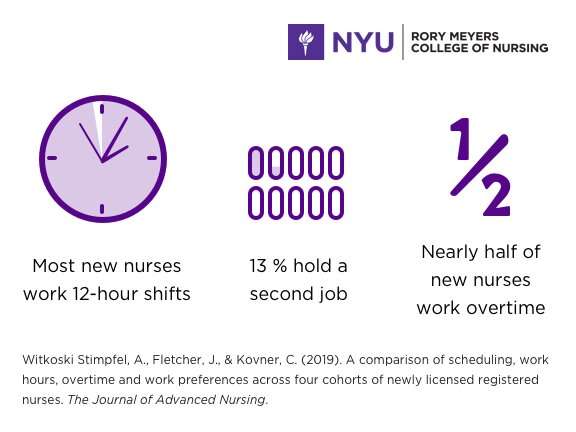 New nurses are predominantly working 12-hour shifts and nearly half work overtime, trends that have remained relatively stable over the past decade, finds a new study by researchers at NYU Rory Meyers College of Nursing. In addition, 13 percent hold a second job, according to the study published in the Journal of Advanced Nursing.

Changes in health policy in recent years—from the passage of the Affordable Care Act and increased access to healthcare to the recession, which delayed some nurses’ retirements—have had implications for nurses and the hours they work.

“Research shows that nurses’ hours, scheduling patterns, and overtime have been associated with patient safety and nurse well-being,” said Amy Witkoski Stimpfel, Ph.D., RN, assistant professor at NYU Meyers and the study’s lead author. “However, we wanted to understand what these changes in the global economy have meant for the newest generation of nurses.”

Witkoski Stimpfel and her colleagues analyzed surveys from more than 4,500 newly licensed nurses in 13 states and Washington, D.C., collecting information on nurse demographics, education, work attributes, and attitudes. Specifically, nurses were asked about their work schedule, daily shift length, weekly work hours, overtime, and whether they worked a second job. Four different cohorts of nurses—those first licensed in 2004-2005, 2007-2008, 2010-2011, and 2014-2015—completed the survey soon after being licensed; these cohorts were compared to observe changes over time.

The researchers found that newly licensed nurses work an average of 39.4 hours a week, predominantly in 12-hour shifts. More than 13 percent report having a second paid job. New nurses prefer working the day shift, and the preferred shift length is 12 hours.

Twelve percent of nurses report working mandatory overtime (an average of less than an hour in a typical week), and nearly half (45.6 percent) work voluntary overtime (an average of three hours in a typical week). The researchers observed nuanced changes in overtime hours during the decade studied: there was a decline in both mandatory and voluntary overtime during the economic recession by about an hour per week, but overtime hours rose in the most recent cohort.

Taken together, the findings have both positive and negative implications for new nurses.

“On the positive side, we observed that new nurses appear to be working a similar proportion of 12-hour shifts as more experienced nurses based on other studies, and the majority of nurses were working the shift and schedule that they preferred. We also did not find meaningful increases in overall weekly work hours or overtime hours compared to previous studies,” said Witkoski Stimpfel. “At the same time, our study did not reveal major changes in when or how long new nurses are working that could enhance patient safety and well-being among nurses.”

The study’s findings on overtime were particularly troubling, given that previous research has established associations between working overtime and patient outcomes (e.g. medication errors), occupational injury among nurses (e.g. needle sticks), and factors like burnout and job dissatisfaction. While voluntarily working overtime can be a welcome source of income for some nurses, mandatory overtime—which is restricted by law in 18 states—was found to be a practice norm, occurring for 12 percent of new nurses.