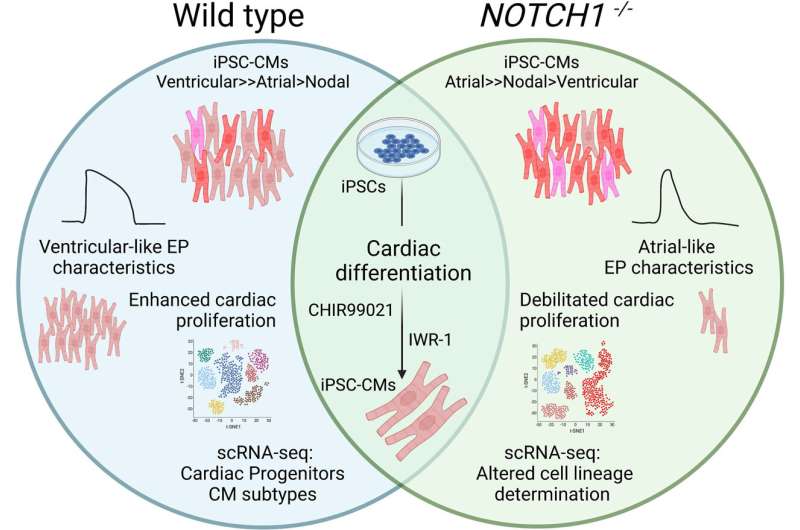 A new study published in Circulation Research provides novel insights into how mutations in the NOTCH1gene may lead to abnormal differentiation and proliferation of cardiomyocytes and contribute to ventricular hypoplasia and other structural anomalies found in congenital heart defects in humans.

In 2005, Vidu Garg, MD, a pediatric cardiologist and director of the Center for Cardiovascular Research at Nationwide Children’s Hospital was the lead author of a publication in Nature that first described the link between NOTCH1 mutations and congenital heart disease. Since that publication, mutations in NOTCH1have been implicated in multiple types of congenital heart defects, including hypoplastic left heart syndrome, in which the left ventricle is underdeveloped.

Though NOTCH signaling is essential for heart development in mammals, it is unknown how the NOTCH1 gene regulates the differentiation and proliferation of human cardiac cells during development. Additionally, the molecular mechanisms leading to ventricular hypoplasia were not understood, says Dr. Garg.

“In this recent study, we investigated how loss of NOTCH1 may actually cause the heart to develop abnormally using human cells,” says Mingtao Zhao, DVM, Ph.D., a principal investigator in the Center for Cardiovascular Research at Nationwide Children’s.

They found that NOTCH1 disruption blocks human ventricular-like cardiomyocyte differentiation but promotes the generation of atrial-like cardiomyocytes. In addition, NOTCH1deficiency results in defective early cardiomyocyte proliferation, possibly through downregulation of pathways that are involved in cell cycle progression and mitosis.

“These findings provide some insight on the disease mechanisms underlying severe types of congenital heart defects where the left side of the heart is not well formed, such as hypoplastic left heart syndrome,” says study senior author Dr. Zhao, who is also an assistant professor of pediatrics at The Ohio State University College of Medicine.

Since first heart field progenitors primarily contribute to the left ventricle, Dr. Zhao and colleagues suggest that NOTCH1mutations leading to biased differentiation of these cells, as well as blocking ventricular-like cardiomyocyte differentiation and leading to defective cardiomyocyte proliferation. These collectively may contribute to left ventricular hypoplasia in congenital heart disease.

“If we could better understand why the ventricle is not growing and why the cardiomyocytes are not proliferating, it would open opportunities for therapeutic strategies,” says Dr. Garg, who is also a professor of pediatrics at The Ohio State University College of Medicine and holds the Nationwide Foundation Endowed Chair in Cardiovascular Research.

In 2019, Dr. Zhao established the first human iPSC Genomics Laboratory in the Center for Cardiovascular Research at Nationwide Children’s. Since then, Dr. Zhao, Dr. Garg and their team have created a large iPSC repository using blood samples from more than 100 patients with congenital heart disease.

“With a patient-derived iPSC-based platform, we may find pathways or genes with therapeutic potential” he says. “In the future, we may be able to use a gene therapy or small molecule approach to stimulate cardiomyocyte proliferation during early development.”