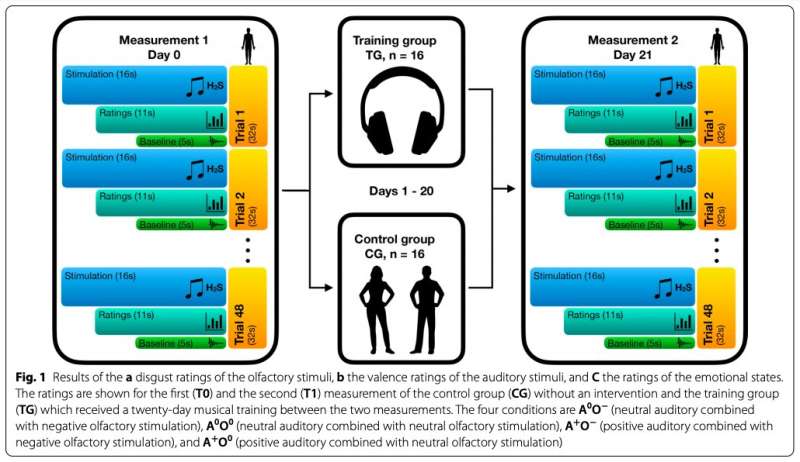 During their everyday life, humans can regulate their negative emotions in different ways, most of which do not require any conscious cognitive engagement. For instance, they might take a bath, step outside for fresh air or listen to music.

Researchers at Radboud University Nijmegen in The Netherlands, the Norwegian University of Science and Technology (NTNU), and University Hospital Aachen, Germany have recently carried out a study aimed at investigating the effects of a short-term musical training on implicit emotion regulation. Their paper, published in BMC Neuroscience, specifically examined whether musical training helped people to reduce the negative emotions elicited by unpleasant or disgusting odors.

“At the time of conception, my colleagues and I worked in the same department in Aachen,” Nils Kohn, one of the researchers who carried out the study, told MedicalXpress. “The project was born out of our curiosity for emotions and the power of mood induction that is harbored by music. Mark Berthold-Losleben, being more of a trained musician than myself, was the perfect person to discuss this with.”

Kohn, Berthold-Losleben and their colleagues decided to investigate whether, in a controlled environment, music could change people’s emotional responses to unpleasant smells. They focused on olfaction because previous studies found that odors can consistently lead to emotional responses.

Their paper draws on previous knowledge about the stability of olfaction and its neuroanatomical connections, which was gathered by their research group in the past. In addition, it builds on Kohn’s theoretical interpretation of how implicit emotion regulation works.

“In the first draft of our paper, we also wanted to explore implicit emotion regulation among professional musicians and/or composers,” Berthold-Losleben said. “Therefore, we initiated a cooperation with the school for music and dance in Cologne to recruit participants. Unfortunately, most musicians didn’t meet our schedule or the study’s inclusion criteria. Another problem was that professional musicians, or at least those we tried to recruit, did not like the positive auditory stimuli as much as non-professionals did. We assumed that this was because of their professional and therefore more complex approach to music. Maybe our stimuli were too well-known and boring to them.”

To investigate the effects of musical training on implicit emotion regulation, Kohn, Berthold-Losleben and their colleagues designed a simple experiment in which they paired negative olfaction (eliciting a negative emotion) with positive music to create four different combinations of stimuli. They then recruited 31 healthy participants to take part in their experiment.

Essentially, participants were either exposed to an odor similar to rotten eggs or to no odors at all. Simultaneously, they either listened to an excerpt of classical music or to a neutral range of tones.

“We then added three weeks of passive listening to classical music as our musical intervention for participants and re-did the test,” Kohn explained. “In the task, subjects had to always rate how disgusting the smell was, how they liked the music and how they felt in general. This was done while the subjects lay in the fMRI scanner.”

If they were also applicable to individuals with psychiatric disorders, the findings gathered by this team of researchers could have important implications. For instance, they could highlight the value of musical interventions for increasing stress resilience and helping people with affective disorders to better regulate their emotions.

“Patients suffering from affective disorders like depression often find themselves in an endless circle of sameness,” Berthold-Losleben said. “Once confronted with triggers that lead to negative affect, they react with negative emotions/feelings, negative body experiences and negative thinking. All of that itself can trigger a new negative affect. These patients tend to end up in a negative circle or spiral which it is difficult or impossible to get out of.”

The overreaching goal of the work by Kohn, Berthold-Losleben and their colleagues is to devise simple musical interventions for people with depression or other affective disorders, which are easy to implement and could improve their ability to regulate negative emotions. Firstly, however, they had to gain a better understanding of emotion regulation and of the stimuli that can elicit or reduce negative emotions.