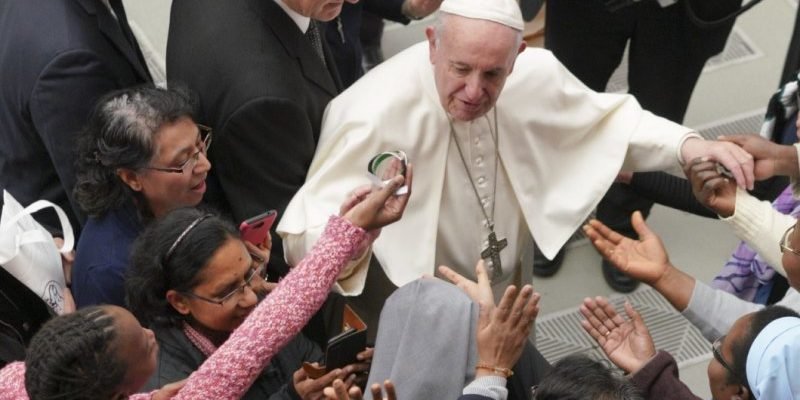 Still no word from the Pope about whether he's accepting the challenge from a 12-year-old girl in Long Beach, California to go vegan for Lent for a million dollars. Genesis Butler, who was pictured in full-page newspaper advertisements looking wistfully into the heavens, isn't funding the challenge herself (that would suggest unusual financial autonomy for a preteen). Rather, she's fronting a campaign called Million Dollar Vegan, which is backed by vegan activists including Sir Paul McCartney. 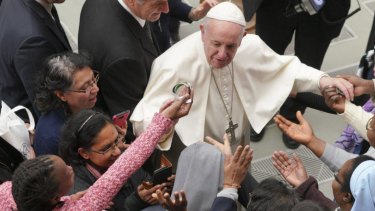 Pope Francis is greeted by a group of nuns during the weekly general audience.Credit:AP

Genesis – who presumably was christened after the first book of the Bible – has, it seems, been vegan since the age of six and has staged multiple protests against animal cruelty. She says there are many reasons for eating a plant-based diet: "An animal side, a health side and an environmental side". She wears a T-shirt saying: Fight Climate Change with Diet Change. My own daughter is precisely her age and she doesn't come up with this sort of stuff. I can only assume that poor Genesis has been indoctrinated by her parents with a thoroughness that organised religion can only dream of.

Anyway, if the Pope has any sense, he'll take the money and spend it on the poor. Because what even 12-year-old vegans should know is that fasting in Lent is par for the course, and until very recently, most Catholics would have had a fasting regime that was essentially vegan plus fish. Pope Gregory, in the sixth century, summed it up: Meat, dairy and eggs were off the menu for 40 days. It's why we have Shrove Tuesday: pancakes were a useful way of using up the milk and eggs. It's the reason for the festival we call Mardi Gras or Carnival – farewell to meat – to finish off the supplies before the fast started, and it was generally a festival of misrule. Actually, Lent was formerly a time to abstain from fighting and sex as well, but that's rather less popular now.

Most Western Christians will observe Lent by giving something up, like drink or sweets. But in the Orthodox churches, they're still basically vegan in their fasting. Vegan tourists in Egypt are advised to ask for "fasting food" when they go to restaurants, which will instantly be understood as dairy and meat free.

Anyway, giving up meat and dairy for 40 days shouldn't be a problem for the Pope, with or without the million dollars (Sundays, which recall the day of resurrection, don't count). But he should ask for a quid pro quo from Genesis in addition to the cash, namely, for vegans to drop their perverse insistence on Meat Free Mondays, when the traditional Christian fast day is Friday, to recall the day of the crucifixion.

At least, unlike the vegans, Pope Francis can look forward to Easter and a really good roast lamb to celebrate. That's the thing about veganism, isn't it?

It's always Lent and never Easter.