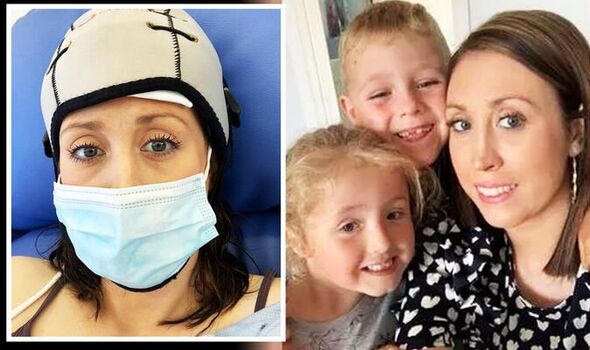 Amie Walton, from Birmingham, had been experiencing heartburn and shooting pains in her shoulders for months when she visited her GP in September 2020. After being rushed to hospital with a suspected blood clot, the 30-year-old was diagnosed with stage four bowel cancer after doctors found a tumour the size of a pea on the right side of her colon which had spread to her liver.

The mother-of-two has opened up about how she will not get to see her children grow up, reports The Mirror.

She is now fundraising to pay for a £2,000-a-month treatment in a desperate bid to buy her as much time as possible with her children, Harry, eight, and Mia, six.

Amie said: “When I was diagnosed with stage 4, I just went completely blank.

“I was so distraught. It all happened so quickly.

“I was terrified, I thought I was going to die. I’m so young and I was fit and healthy, so it was a massive shock.

“But the chemo was miraculous. We were told I had a small chance for it to be successful, but it worked.

“My liver went from being like that of an alcoholic to being completely normal.”

Within a week of her diagnosis Amie underwent chemotherapy, which left her sensitive to the cold and unable to touch her children’s hands.

Tragically despite this gruelling treatment she was told in April last year it had been successful.

She had six tumours on the left side of her liver and 15 on the right.

Amie was also told she was eligible to have 60% of her liver removed.

But after having the procedure, two more tumours were found and the young mum had to have three more rounds of chemo in June 2021.

In November, she was told the treatment had not worked and that she would have to have £35,000 selective internal radiotherapy treatment (SIRT), where tiny radioactive beads are injected into the artery which supplies the cancer.

The treatment is not available on the NHS.

Amie said: “The unit where I receive treatment in the hospital is next to where the babies are and I always say that’s where I should be, not on the cancer ward.

“This has just been surreal. I can’t believe it at times, I’m so young.

“Especially the days I don’t feel so bad. I just don’t really understand how I have cancer.

“Even nurses have cried when they’ve seen me and they see the most horrible things every day.

“I’m a young mum with young children. I shouldn’t be in and out of hospital wondering how long I have left.”

In order to help raise funds, Amie’s friend Jess Davies launched a fund which has raised more than £14,000.

In March this year test revealed Amie had more than 50 tumours in each lung.

She added: “I just wanted to curl into a ball. It feels like I’m living in a nightmare and I want to wake up.”

“All I care about is my children and my fiancé. I still want my children to see me as their mum, who was always there for them.

“The toughest days are when I miss important things for them, because I’m ill or having treatment.

“My daughter had her first play and I wasn’t able to be there, which was really sad.

“These are the moments as a parent when you need to be there, as it’s so important to your children.

“This palliative chemotherapy would mean I could be there for them for longer.”

Her fiancé Chris added that he feels numb and that the options are ‘running out.

He said: “Our oncologist started talking to us about wills, which was just something I didn’t think we would ever be talking about.

“But I’m so proud of Amie. She’s been incredible, after going through the most horrendous time and does everything she can for our children.”

You can donate to Amie’s treatment at GoFundMe.