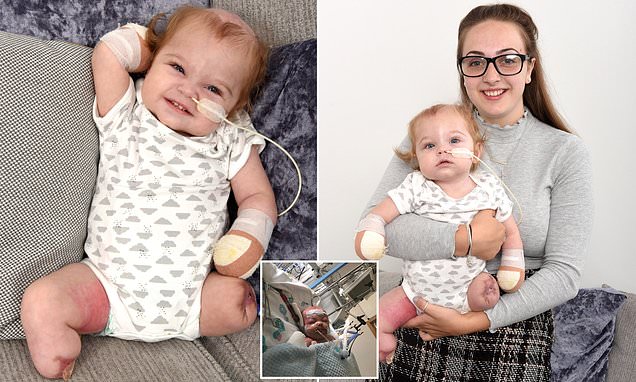 Mother, 23, reveals how her baby’s leg ‘came off in her hand’ after her 11-month-old son developed sepsis from a throat infection and lost all four limbs

A mother has told how her baby boy lost all four of his limbs after a throat infection turned into deadly sepsis.

Abigail Wardle, 23, worried her son Oliver Aisthorpe may be dehydrated when she noticed the ‘soft spot’ at the back of his head was sunken.

The next day, on March 17, medics put the now 11-month-old in a medically-induced coma after they discovered he had sepsis.

Miss Wardle, of Cleethorpes, Lincolnshire, was told twice the youngster would not make it, with the hospital chaplain even coming to baptise him.

Although he pulled through, Oliver’s limbs turned black and ‘died’. Miss Wardle even claims one of his legs ‘self amputated’ and came away in her hands when she lifted him.

After having his remaining limbs removed, the youngster was finally discharged from hospital last month and is adapting well to life with his stumps.

Scroll down for video 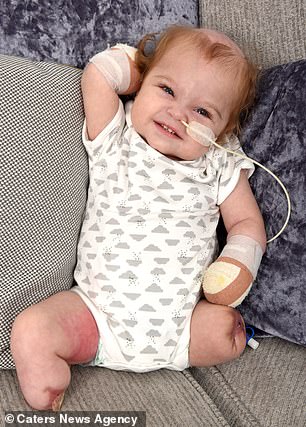 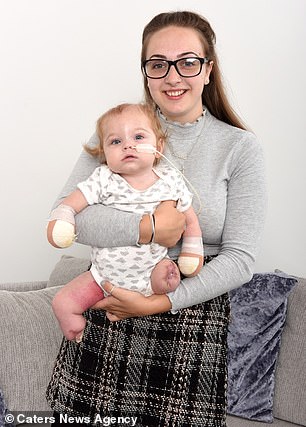 Oliver Aisthorpe lost all four limbs (seen left) as doctors battled to save him from deadly sepsis. The now 11-month-old is pictured right with his mother Abigail Wardle, who was told by medics twice they may be unable to save her son from the deadly reaction 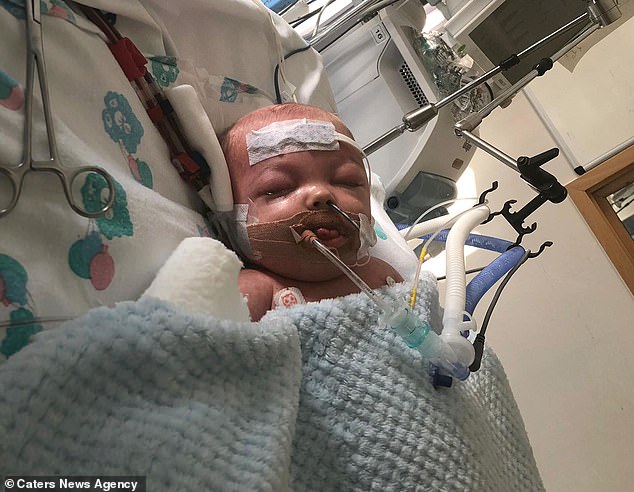 Oliver was admitted to hospital on March 17 after he appeared ‘lifeless’, ‘lethargic’ and like his bones were ‘aching’. A nurse took one look at the youngster and rushed him into the resuscitation area, where he was put into a medically-induced coma (pictured)

Speaking of the ordeal, Miss Wardle said: ‘He went from laughing and giggling to death’s door within 48 hours and nobody knew what was wrong with him.

‘What we went through was horrendous and I had never been so scared in my life. Some people might feel sorry for us but I feel like the luckiest mum in the world.

‘I still have Oliver with us, he might not have any hands or feet but he is still my smiley, brave little boy.’

Discussing the moment her son’s leg came off in her hand, she added: ‘One day, a nurse was helping me lift Oliver from his bouncy chair back into the bed, and his leg just came away.

‘The doctors came running in and asked me if I wanted to leave the room because it was quite distressing.

‘I told them, “My son’s leg has just fallen off and is hanging on by a thread, I am not going to leave him here”.’

Miss Wardle, a jewellery designer, noticed Oliver was ‘under the weather’ on March 16 when his soft spot appeared sunken.

‘Bulging or fullness’ of the soft spot – posterior fontanelle – is a symptom of sepsis in babies, according to Brenner Children’s Wake Forest Baptist Health.

Miss Wardle claims she took her son to a GP, who told her to give him fluids and Calpol.

When Oliver deteriorated the following day, Miss Wardle took him to see an out-of-hours GP at a local hospital.

‘Oliver had seemed a bit under the weather,’ she said. ‘But that night, he got more ill and seemed lifeless. When I moved him, it was as though his bones were aching.

‘He quickly became very pale and lethargic, and just wasn’t his usual self. I would cuddle him and he was groaning as though his bones were aching.

‘He eventually stopped crying and was just whimpering, as though he didn’t have the energy to cry.’

Miss Wardle tried to feed Oliver but he refused to eat, only wanting a little bit of milk.

Trusting her instincts, the mother-of-one took her son back to hospital. Once there, a nurse took one look at the youngster and rushed him to the resuscitation area.

‘Everything was a blur,’ she said. ‘I still had no idea what was wrong with Oliver, I was just trying to hold it together as they were putting him to sleep.

‘I could hear a doctor on the phone to another hospital asking how to treat Oliver.

‘His hand and feet had started to go purple, and I just remember thinking he must be cold and telling them to put some socks on him.

‘A doctor sat us down and said, “Your son is very poorly”, I just thought, “I know that, he’s in a coma and hooked up to a load of machines”, but I had no idea how ill he was.’

‘It was only when a nurse came over to speak to us and burst into tears that I realised how serious is was. 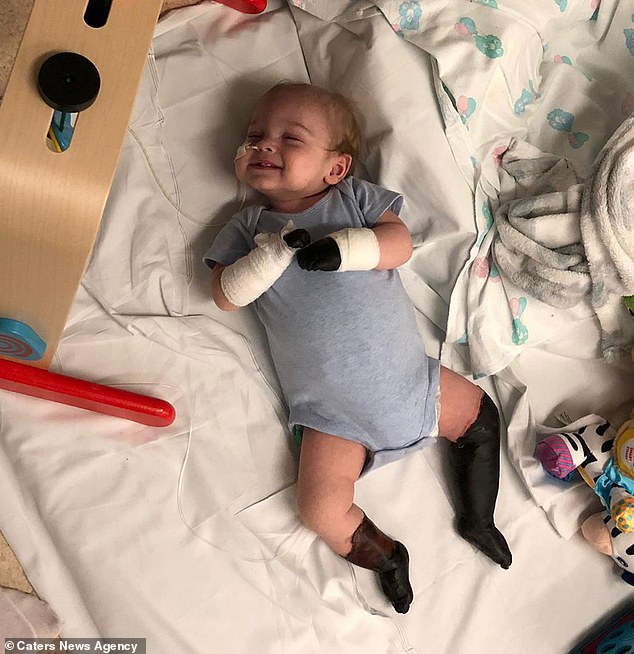 Although he pulled through, Oliver’s limbs turned black and ‘died’. This can occur if sepsis causes the body’s anti-clotting mechanism go into overdrive. This results in the blood vessels becoming blocked, which cuts off oxygen and vital nutrients to the body’s tissues 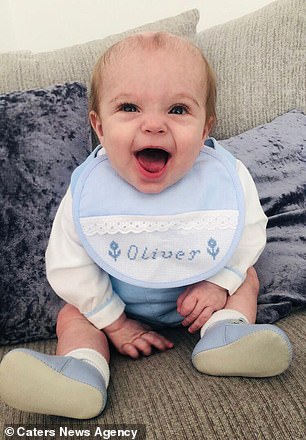 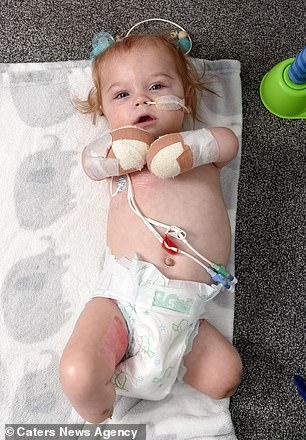 Oliver was a healthy, happy baby (seen left) until a throat infection developed into sepsis earlier this year. Doctors decided to amputate the youngster’s limbs (seen right) after one of his legs ‘broke off’ in his mother’s hands when she went to pick him up 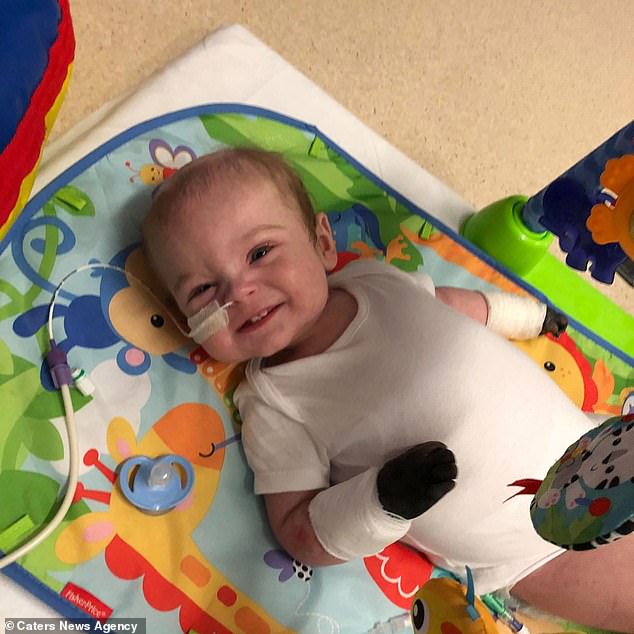 Doctors wanted to ‘wait and watch’ to see if they could save some of Oliver’s legs. However, his mother begged the medics to get the operation over with to ensure her son would survive

Doctors discovered Oliver’s sepsis came about from an undiagnosed throat infection, which he had never shown any symptoms of.

They managed to stabilise the youngster but warned Miss Wardle if he deteriorated they would not be able to save him. At this point, amputation became his only hope of survival.

Sepsis can cause the body’s clotting mechanism to go into overdrive, which causes blood vessels to become blocked.

When blood cannot pass through blood vessels, the body’s tissues miss out on oxygen and vital nutrients, which causes them to die. If too much tissue dies, it has to be removed.

Doctors wanted to save some of Oliver’s leg, however, Miss Wardle begged them to get the operation over with.

‘Oliver was out of the woods but they kept delaying a date for his amputations to try to save more of his leg, but I could see his body was trying to get rid of it,’ she said.

‘Once he had his limbs removed, he was like a different child – so happy and full of life, it seemed like a relief for him,’ Miss Wardle said.

The youngster was finally discharged from hospital three weeks ago and is getting used to life without his limbs.

‘I am just so proud of Oliver,’ Miss Wardle said. ‘He has taken everything in his stride and is just so incredibly resilient. He makes me smile every day.

‘Already, he is trying to work out how to roll over and play with his toys with his stumps.

‘I could have come out of the other end of this with no son, so that’s what I focus on.

‘We have our bad days, but I know there will be better days to come.’ 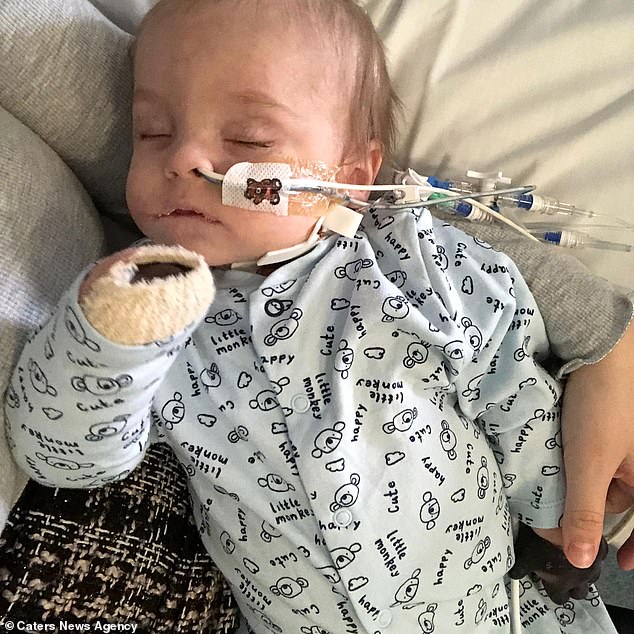 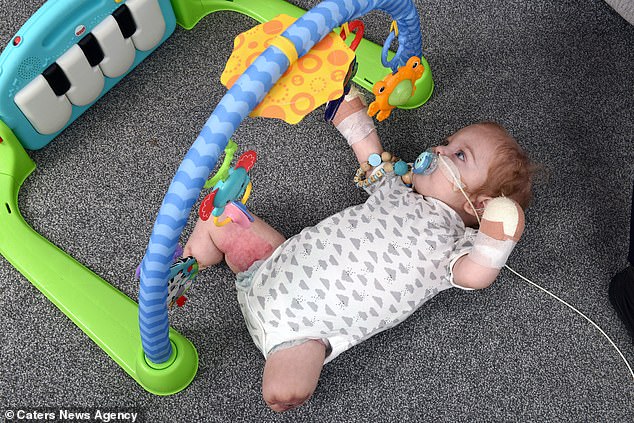 Miss Wardle is speaking out to raise awareness of sepsis in babies. This can include not urinating for 12 hours, being unable to keep food or milk down and swelling around a cut.

‘I don’t want any other family to go through what we went through, and so I want everyone to be more aware of sepsis’, she said.

‘I want some good to come out of what happened to Oliver.

‘I want his story to be used to help spread awareness, and teach other parents and GPs, who maybe don’t have specialist paediatric training, about the signs of sepsis.

‘I had no idea how ill Oliver was but if he hadn’t gone into hospital when he did, he wouldn’t be here.’ 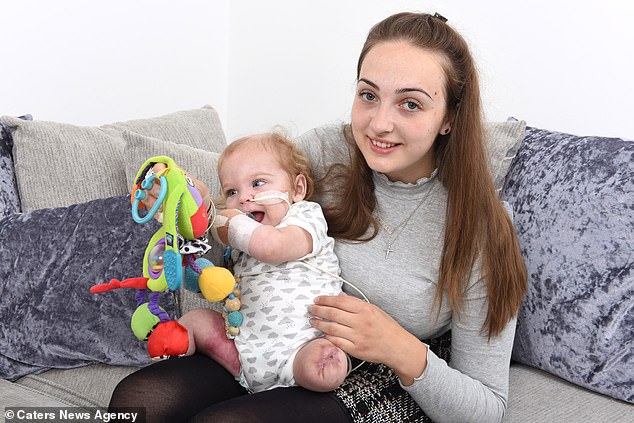 ‘Sepsis is a notoriously difficult condition to spot, and to do so relies upon health professionals being alert to the possibility of sepsis in any patient who is deteriorating without a clear cause.

‘Outcomes like Oliver’s can be prevented through better awareness of sepsis and by empowering our public to, “Just ask: could it be sepsis?”.

‘For some, like Oliver, who are thankfully in the minority, amputation of limbs can become necessary.

‘In Oliver’s case, one of his limbs underwent auto-amputation. This is where the blood supply to a limb is so low the tissues die, but without developing a secondary infection and without the release of toxins into the body.

‘Health professionals then typically watch and wait to see how much of the limb will remain healthy, with the result that the part in which the tissue has died will ultimately fall off.’

Sepsis occurs when the body reacts to an infection by attacking its own organs and tissues.

Some 44,000 people die from sepsis every year in the UK. Worldwide, someone dies from the condition every 3.5 seconds.

Sepsis has similar symptoms to flu, gastroenteritis and a chest infection.

Symptoms in children are:

Under fives may be vomiting repeatedly, not feeding or not urinating for 12 hours.

Anyone can develop sepsis but it is most common in people who have recently had surgery, have a urinary catheter or have stayed in hospital for a long time.

Other at-risk people include those with weak immune systems, chemotherapy patients, pregnant women, the elderly and the very young.

Treatment varies depending on the site of the infection but involves antibiotics, IV fluids and oxygen, if necessary.