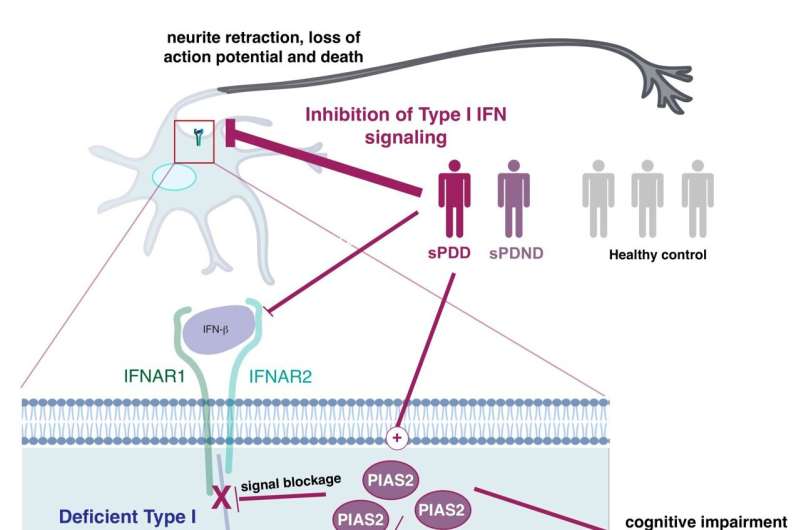 12,000 people in Denmark and 7 to 10 million people worldwide suffer from Parkinson’s Disease (PD). It is the second most common neurogenerative disorder of aging and the most common movement disorder, but the cause of the disease is largely unknown.

In a new study, researchers from the University of Copenhagen show that the most common form of the disease, encompassing 90 to 95 percent of all Parkinson’s Disease cases known as sporadic PD, is caused by a blockage of a pathway that regulates the nerve cell’s powerhouse, the mitochondria.

“Just like when people eat, cells take what they need and get rid of the rest waste products. But if our brain cells have this specific kind of signaling blockage, it means that the powerhouse of the cell—mitochondria—cannot get cleaned up after being damaged,” explains corresponding author and group leader Professor Shohreh Issazadeh-Navikas at the Biotech Research & Innovation Centre.

The blockage leads to an accumulation of high amounts of damaged mitochondria, while not being able to produce enough energy for the cells. It causes neurons to gradually die, which is the reason for the development of Parkinson’s Disease symptoms, and why it leads to dementia.

The blockage is caused by a dysregulation of the immune genes, more specifically a pathway called type 1 interferon, which is normally important for fight against viruses, but now we show that it is also responsible for regulating the energy supply of the nerve cells.

“Every part of our body needs to be regulated. We get a signal to stop eating, when we are full, and the same thing happens everywhere else in our body. If we get an infection, parts of our body need to fight it and stop it from replicating. But when the infection is cleaned up, the signal should subside. This is the job of a protein called PIAS2. That causes the blockage of the type 1 interferon-pathway, and when the infection is over, the blockage should stop and go back to normal. But that does not seem to be the case in patients with Parkinson’s Disease. We further demonstrate that this dysregulation leads to a defect in the mitochondrial energy supply, as mentioned before,” says Issazadeh-Navikas.

The researchers combined and analyzed four data sets, which studied neurons from brains with Parkinson’s Disease and looked at what type of genes they express.

They then looked at which gene patterns were disturbed in patients with Parkinson’s Disease and especially those who had also developed PD with dementia.

In order to test the results, the major findings of the combined data was tried in three different mouse models using a negative regulator of the type I interferon pathway, PIAS2, which had been identified from the patients study as one of the key proteins linked to the progression of Parkinson’s Disease and dementia.

“We show that a high accumulation of the PIAS2-protein is what is causing the blockage in the pathway, which should have activated the processes responsible for removing damaged protein and mitochondrial garbage,” says Issazadeh-Navikas.

“The accumulation of damaged mitochondrial mass further leads to increase of other toxic proteins. So when we compare patients to same-aged healthy patients without Parkinson’s Disease, we see that this PIAS2-protein is highly expressed in the neurons, which is why this pathway should be evaluated for potential roles in the other forms of familial Parkinson’s Disease that we have not studied here.”

The researchers hope the study will encourage research to counteract the pathway blockage, which could have a beneficial impact on the disease and towards preventing dementia.