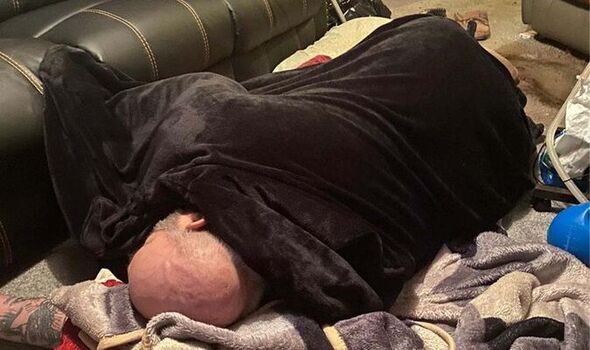 After falling at home on Tuesday, Christopher Robinson, 59, says he pressed his lifeline buzzer which alerted paramedics and his brother Stewart. Though his brother arrived within minutes, it took West Midlands Ambulance Service more than 11 hours to reach him. When the paramedics finally turned up, they had to ring Staffordshire Fire and Rescue Service for help to get him into a specialist ambulance.

Christopher has been undergoing treatment for obesity, and weighs more than 30 stone, the Stoke Sentinel reports.

As a result, it took 12 people and two hours for Christopher to be put in the back of the bariatric ambulance – which caters for patients between 31 and 55 stone – before he was taken to the Royal Stoke University Hospital.

Royal Stoke Unison representative Stewart said: “He fell at home and was on the floor. They had to call another one (bariatric ambulance) from Birmingham to bring the hoist but that didn’t turn up in the end so they had to ring the fire brigade to get their assistance.

“We understand the pressures of the NHS but it’s the wait and nobody coming. There’s a hold where ambulances are waiting with patients in the back because they can’t get into the A&E because there’s no beds available. It delays ambulances coming out to another patient. There’s only a small number of bariatric ambulances that are running around all over the area so we have to wait our turn. He was lying on the floor in pain in the same position for over 11 hours. There should be more bariatric ambulances, especially with obesity on the rise.”

Christopher has been admitted to the Royal Stoke.

Speaking about the incident, Stewart added: “It’s shocking. It’s not the fault of the ambulances or the UHNM – it’s the care system all over the UK. There’s not enough government funding. We used to get ambulances arriving in seven minutes. He told me ‘if I was a dog, they would put me down’ because he was left on the floor.

West Midlands Ambulance Service confirmed they received a call at 6.10pm on Tuesday. A paramedic officer arrived at 5.39am who asked for the support of firefighters and for a bariatric ambulance. Once they were both on the scene, WMAS said it took a further two hours to safely extricate Mr Robinson out of the house.

A spokesman said: “We would like to apologise to Mr Robinson and his family for the length of time it took us to arrive. The ambulance service relies on each part of the health and social care system working together so ambulances can get to patients in the community quickly.

“Sadly, the pressures we are seeing in health and social care lead to long hospital handover delays with crews left caring for patients that need admitting to hospital rather than responding to the next call. The result is that our crews are delayed reaching patients.

“We are working incredibly hard with all of our NHS and social care partners to prevent these delays, looking at new ways to safely hand over patients quickly so that our crews can respond more rapidly and save more lives.”

A Staffordshire Fire and Rescue Service spokesman said fire crews arrived in Woolliscroft Road to extricate the man at around 6.40pm.

They added: “The man was left in the care of the ambulance service and was taken to hospital. The crew left the scene just before 8am on Wednesday.”

A Department of Health and Social Care spokesperson said: “We recognise the pressure NHS staff are under, especially in the ambulance service, and we continue to thank them for their dedicated hard work. The NHS has allocated £150 million of additional funding to address pressures on ambulance services, with the number of ambulance and support staff increasing by almost 40% since February 2010.

“There is also an additional £50 million of NHS funding to support increased NHS 111 call taking capacity this year, helping people access urgent care when they need it, and use ambulances and A&E only when necessary.”