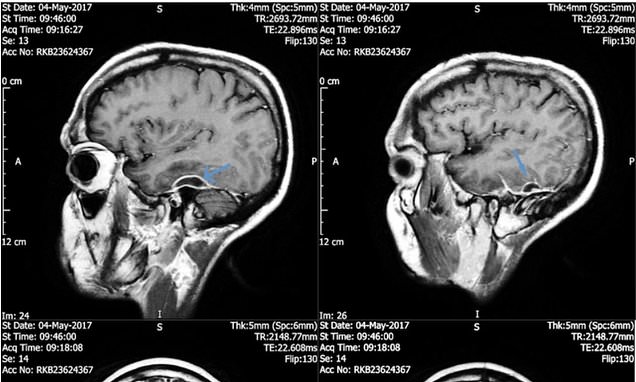 Man, 31, rushed to A&E in an ambulance after collapsing because a COTTON BUD stuck in his ear caused an infection which triggered seizures and vomiting

A man rushed to hospital in an ambulance after collapsing was discovered to have an infection in his skull caused by a cotton bud stuck in his ear.

The unnamed patient, from the Coventry area, had been suffering from seizures, headaches, ear pain and discharge from his left ear.

He also admitted to struggling to remember people’s names in the days leading up to his hospitalisation, and had been vomiting.

His GP had been treating him for a severe ear infection without any luck – and hospital doctors discovered the real problem was deeper inside his skull. 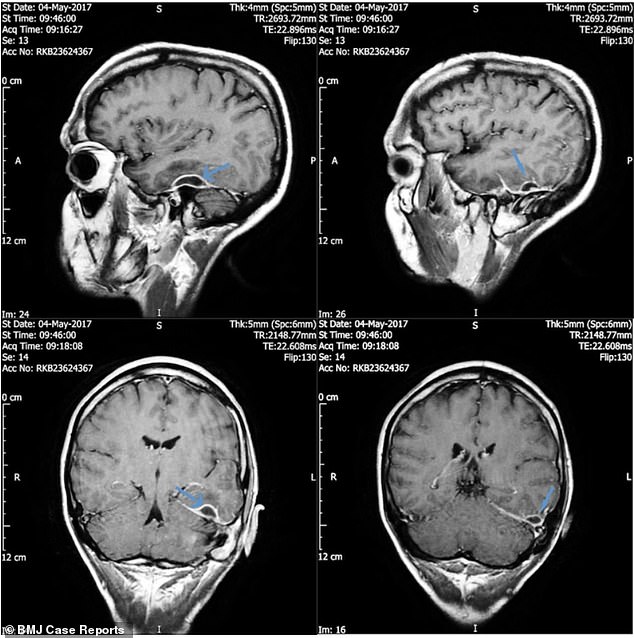 CT scans of the man’s head showed he had abscesses inside his skull (shown by the blue arrows) which had been caused by an infection called necrotising otitis externa, which began with a cotton bud

Doctors at the University Hospitals Coventry and Warwickshire NHS Trust treated the man after he arrived in A&E.

Ear, nose and throat specialist Alexander Charlton wrote in the journal BMJ Case Reports: ‘[The patient] had a background of intermittent left ear pain and hearing loss for the past five years.

‘He also admitted to being more forgetful of names in recent days, although denied other neurological symptoms.’

Aside from the symptoms he told them about, doctors found the patient didn’t have a fever and his physical exam was otherwise ‘unremarkable’.

After giving him antibiotics in case he had the deadly brain infection meningitis, medics decided to explore the man’s ear with him under general anaesthetic.

COTTON BUDS ‘SHOULD NOT BE USED TO CLEAN EARS’

Cotton buds should not be used to clean ears, health officials said in 2017.

Inserting a bud could damage the ear canal and eardrum and push wax further down, according to the health watchdog.

The draft guidance from the National Institute for Health and Care Excellence (Nice) also says that ear syringing, in which a large metal syringe is used to pump water manually into the ear to clear out wax, is potentially harmful and should no longer be used.

Its committee agreed that buds may be a ‘hazard’ that can cause infections or push wax further into the ear canal.

The guideline says the ear canal is ‘self-cleaning’, with excess wax falling out on its own, and that the entrance to the ears can be cleaned with a damp flannel.

And, rather than manual syringing, which can cause trauma, Nice recommends ‘ear irrigation’, in which an electronic machine pumps water safely into the ear at a controlled pressure to remove problem wax.

They found the inside of his ear canal was ‘inflamed and filled with discharge/debris with… [an] overlying impacted cotton bud’.

It is unclear how long the cotton bud had been in his ear but he had been suffering from hearing loss on that side for five years.

The report said cotton buds being stuck in the ear is a common cause of infections and injuries but this had never been observed before.

Medics pulled out the cotton bud and debris and diagnosed the man with an uncommon infection called necrotising otitis externa.

The infection is usually caused by bacteria and affects the ear canal, surrounding bone and – in the case of this patient – tissue inside the skull, but not the brain.

CT scans doctors used to diagnose him show abscesses inside the skull, in the form of small empty spaces between his bone and brain.

After his ear was cleared out and he was hooked up to intravenous antibiotics, a scan six days later revealed his abscesses had shrunk.

And, after a week in hospital, the patient was discharged with an eight-week supply of medication.

He made a full recovery after 10 weeks.

In the report doctors wrote: ‘At the completion of his course of antibiotics, the patient remained systemically well with no neurological deficit and no residual ear symptoms.

‘Most importantly, he is no longer using cotton buds to clean his ears!’