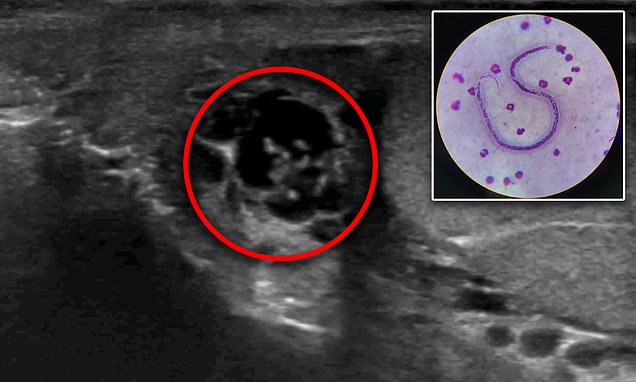 The 26-year-old, from New Delhi in India, went to a sexual health clinic after suffering from a tender and swollen right testicle.

Doctors were shocked to see ‘linear structures moving’ in a thin tube that carries fluid and white blood cells in the scrotum.

The unnamed patient was diagnosed with lymphatic filariasis,  and prescribed a three-week course of an anti-parasitic drug. When the patient returned, the worms had disappeared.

It comes after a Venezuelan man was forced to seek medical attention after a beer bottle became stuck up his bottom — and claimed thieves put it there. 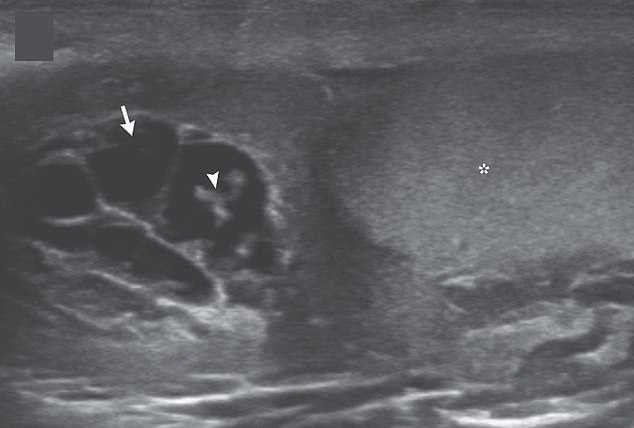 The above shows the parasitic worms in the scrotum. The testicle is shown right (marked by the asterisk), with the tubes above it indicated by the arrow and triangle. The triangle is pointing to the worms lurking in one of the body’s tubes 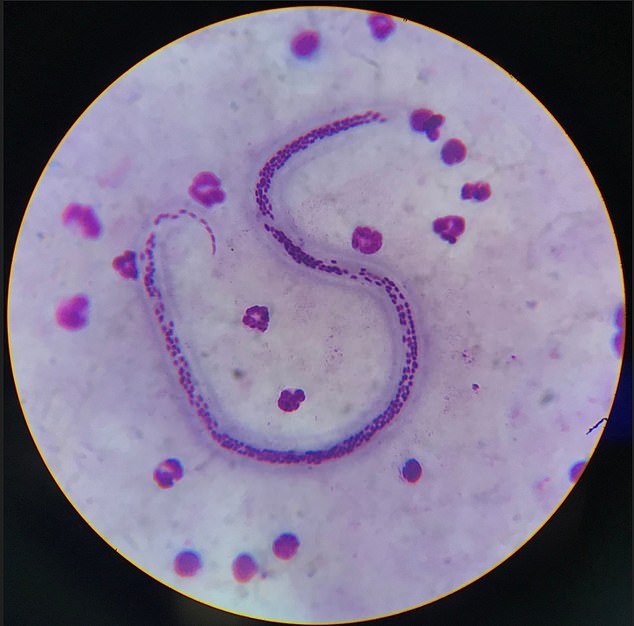 The parasitic roundworms, scientifically named Wuchereria bancrofti, can live in humans for five to seven years where they mature, mate and release millions of offspring (file photo)

The unpleasant infection was revealed in a case report published by the New England Journal of Medicine.

Dr Amit Sahu, a senior medical consultant at the Max Super Speciality Hospital who examined the patient, said ‘linear structures could be seen moving’ in the ultrasound.

‘The dance represents the undulations of live worms’, he wrote.

‘[They] have migrated into the lymph system, causing dilation and dysfunction of the channels.

The 79-year-old, who has not been named, claimed the bottle was shoved up his anus by thieves who tried to rob him, according to local media.

After the ultrasound, doctors also removed fluid from the scrotum and examined it under a microscope.

The patient was prescribed diethylcarbamazine, a powerful anti-parasitic drug that kills worms.

When the patient returned three weeks later, another ultrasound showed the worms were gone. He made a full recovery.

Infections with the worms are triggered through bites from mosquitos, which transfer them into the bloodstream.

Once there, they travel into the lymph system — a circulatory system used to drain fluid. This carries them to other areas of the body, including the scrotum.

In this system they mature, mate and release millions of offspring.

Normally, the worms do not cause any symptoms.

But in some cases damage to the lymph system causes fluid to start building up in the legs triggering lymphedema. In cases where there is gross swelling of limbs, patients are diagnosed with elephantiasis.

In men, the parasitic worms can also prompt swelling in the genital area.

Swelling can become so severe that it leads to disfigurement and mobility issues for sufferers.

Antiparasitic medicines are used to treat the disease.

Infections with the parasitic worm are relatively common in tropical and sub-tropical areas including parts of Africa, Asia and South America. They are not present in the United States or UK.

The Centers for Disease Control and Prevention (CDC) says people need to be bitten repeatedly by infected mosquitoes over several months to get infected.

They add: ‘Short-term tourists have a very low risk.

‘[But] people living for a long time in tropical or subtropical areas where the disease is common are at the greatest risk of infection.’

The World Health Organization (WHO) considers lymphatic filariasis to be a neglected tropical disease.

Estimates suggest more than 50million people have the infection worldwide.

But the WHO says if annual doses of anti-parasitic drugs were handed out to those in at risk regions every year then the disease could be eradicated.

What is lymphatic filariasis?

Lymphatic filariasis is a parasitic infection in humans caused by roundworm.

The worms enter humans through mosquito bites, and then quickly swim to the lymph system.

They mature here, mate, and release millions of offspring.

In most cases the worms trigger no symptoms in their host.

But for a small number of people damage to the lymph system — responsible for draining fluid — leads fluid to start collecting in some areas causing swelling of body parts.

This commonly shows up in the legs as lymphedema or, in more severe cases, elephantiasis.

This can lead to permanent disfigurement or disability in patients.

Doctors diagnose the disease using ultrasounds and also examining fluids from infected organs for the worms.

They say it can be easily treated with a three-week course of an anti-parasitic drug.

It remains common in tropical and subtropical regions.

But the Centers for Disease Control and Prevention (CDC) says they are not a risk to tourists because people need to be bitten repeatedly over several months to become infected.