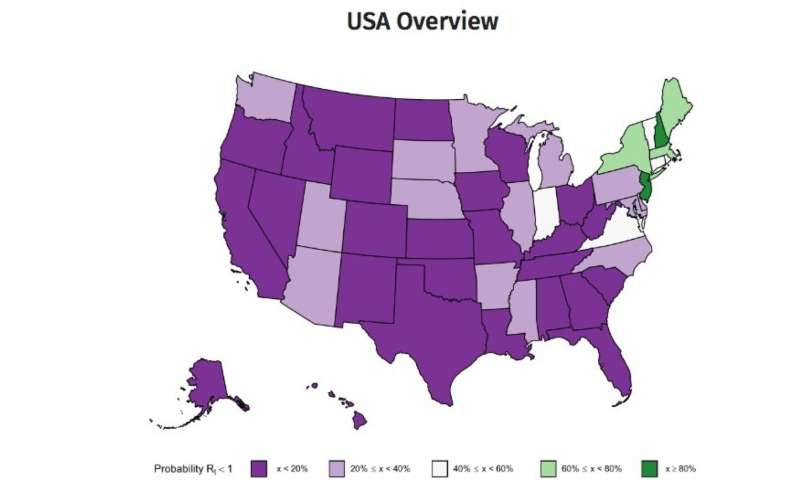 The majority of US states are seeing a rapid increase in COVID-19 transmission, according to Imperial analysis.

Latest estimates reveal that just eight states in the US have contained transmission and reduced the mean reproduction number R below 1.

The researchers also estimate that there are currently between 0.5 million and 1.5 million infectious individuals across the U.S.

The estimates, from Imperial College London’s WHO Collaborating Centre for Infectious Disease Modeling within the MRC Centre for Global Infectious Disease Analysis, Jameel Institute (J-IDEA) and Imperial’s Department of Mathematics, come as the US reports another daily record in confirmed cases and deaths.

The eight states with an estimated mean R number below 1 are: Connecticut, Washington D.C., Massachusetts, Vermont, Maine, New York, New Hampshire and New Jersey, although not one of these estimates have an uncertainty range completely below 1, meaning the actual value for R could still be above 1.

In May, Imperial researchers warned that 24 states still have a reproduction number above the critical threshold of one. This has now increased to 42 states.

The report also shows that after an initial decline in the number of infectious individuals from the end of March in most states, the majority of states are now seeing a rapid increase. 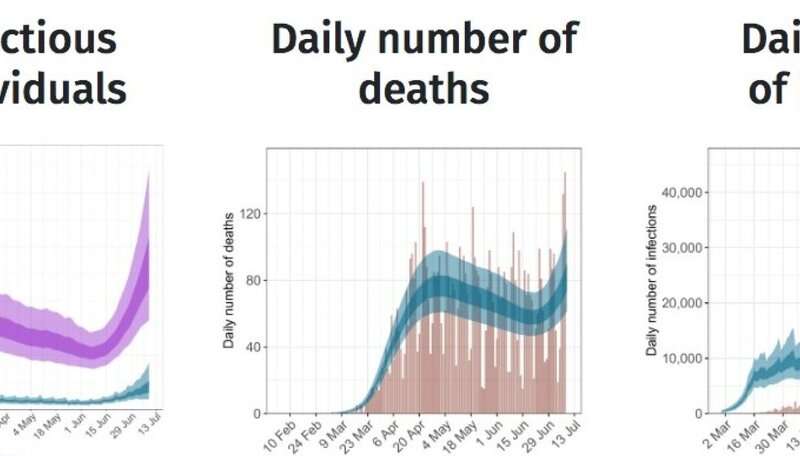 Dr. Juliette Unwin: “Our model predicts that the R number is above 1 in most of the US, with the exception of the Northeast corridor, meaning that numbers of currently infectious people are growing everywhere else.”

Dr. Seth Flaxman: “States like Georgia and Texas opened up at a time when their epidemics were not under control. Each state had thousands of daily infections and tens of thousands of infectious people throughout April and May.”

These latest estimates come from the team’s online dashboard which provides an overview of the current situation in the US, as well as individual state-level estimates.

The researchers use a Bayesian model that calculates backwards from the deaths observed over time to estimate transmission that occurred several weeks prior, and to predict the current rate of transmission.