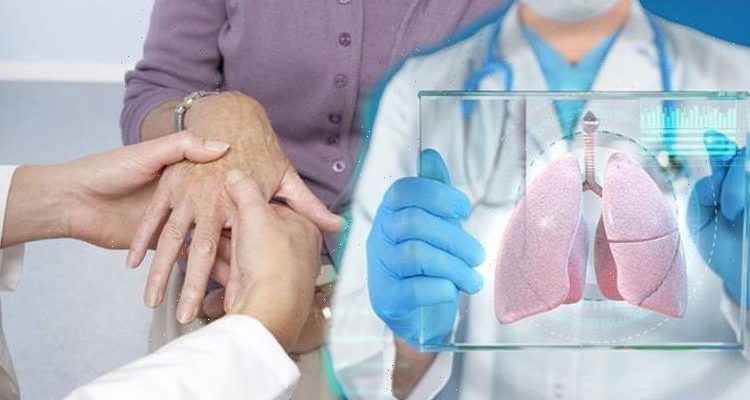 Lung cancer: Signs and symptoms to look out for

Lung cancer is the uncontrolled growth of abnormal cells in one or both lungs. Treatment success is largely determined by the size of the cancer and how far it has spread from the lungs. In other words, the earlier it is picked up, the better. Noticing your fingers appearing larger than normal could be the unusual warning sign indicating you may be at risk.

The health site added: “One of them pushes more blood and fluid to the tissues in your fingertips, so they look thicker or larger than usual.

“It’s not common, but finger clubbing is strongly linked to lung cancer: Around 80 percent of people who have it also have the disease.”

In a study published in the US National Library of Medicine National Institutes of Health, finger clubbing and its association with underlying diseases was analysed.

The study noted: “Although clubbed fingers are mostly asymptomatic, it often predicts the presence of some dreaded underlying diseases.

“It was first described by hippocrates nearly 2500 years ago in a patient with empyema.

“Because of this, it is often described as hippocratic finger and is regarded to be the oldest sign in clinical medicine.

“Later on, it was found to be associated with a variety of clinical conditions including bronchiectasis, lung cancer, cirrhosis of liver, cyanotic congenital heart disease, etc.

“In adults, malignant neoplasm of the lung is the predominant pulmonary cause of clubbing, contributing to nearly 90 percent of cases.

“Among the different types of thoracic malignancy, lung cancer is responsible for 80 percent cases of clubbing, whereas pleural tumours and other intrathoracic and mediastinal growth contribute to 10 percent and five percent cases, respectively.”

She continued: “It is a pretty characteristic finding and a good diagnostic clue to look at the lungs.

“It probably has something to do with oxygenation of the tips of the digits, although there’s really no literature that explains it with 100 percent certainty.”

Other warning signs of lung cancer include: