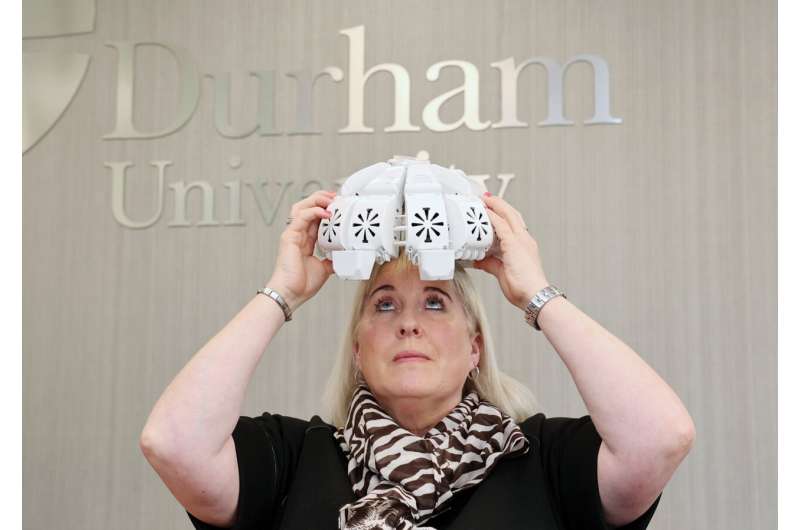 Infrared light therapy might have the potential to help people living with dementia, according to researchers.

As a result, the researchers said transcranial photobiomodulation therapy (PBM-T) – where infrared light is self-delivered to the brain using a specially designed helmet worn by the patient—might potentially also have benefits for people with dementia.

They stressed that more research into the use and effectiveness of the therapy was needed, but that the findings of their pilot were promising.

The research is published in the journal Photobiomodulation, Photomedicine and Laser Surgery.

The research saw 14 healthy people, aged 45 and over, from the UK, receive six minutes of PBM-T twice daily at a wavelength of 1068 nanometres over a period of four weeks. This was carried out alongside a control group of 13 members using a dummy PBM-T helmet.

Scientists conducted a series of memory, verbal, and motor skills tests on the participants in both groups before and after the treatment period to see what improvements in function might have been achieved.

The researchers found a signiﬁcant improvement in performance in motor function (finger tapping), memory performance (mathematical processing, a type of working memory), delayed memory and brain processing speed, in healthy people who had received PBM-T compared to those in the control placebo group.

Participants reported no adverse effects caused by the treatment.

Research Co-Lead Dr. Paul Chazot, in the Department of Biosciences, Durham University, said: “We’ve shown what appears to be real improvements in memory and other neurological processes for healthy people when their brains are exposed to a specific wavelength of infrared light for consistent, short periods of time.

“While this is a pilot study and more research is needed, there are promising indications that therapy involving infrared light might also be beneficial for people living with dementia and this is worth exploring. Indeed, we and our US research collaborators recently also published a new independent clinical study which provides the first evidence for profound and rapid improvement in memory performance in dementia.

“We know that infrared light of particular wavelengths can help alleviate nerve cell damage, amyloid load and reduced blood flow in the brain, which are common in people with dementia, so could it be used as a game-changing multi-modal form of therapy? 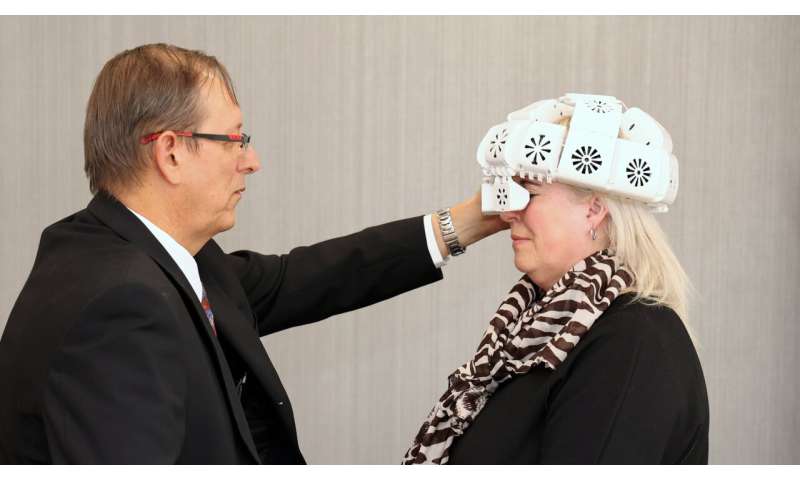 “This could provide a novel disease-modifying strategy for dementia, with the potential to alleviate many of the serious problems faced by people with dementia and reduce the burden on their caregivers.”

The PBM-T helmet has been devised by Dr. Dougal, who is also a practising General Practitioner based in County Durham, UK.

It works by delivering infrared light from 14 fan cooled LED light arrays deep into the brain, focused by the skull, at a wavelength of between 1,060 to 1,080 nanometres delivering 1,368J of energy to the cranium during each six-minute treatment cycle.

This stimulates the mitochondria that generate most of the chemical energy needed to power cells’ biochemical reactions. This in turn leads to a rise in the level of an organic compound called adenosine triphosphate (ATP), markedly decreased in dementia patients, that provides the energy to drive processes in living cells and help nerve cells to repair.

The researchers say the therapy can also increase levels of nitric oxide, and therefore blood flow in the brain by improving the flexibility of the membrane that lines the inside of blood vessels. This opens up blood vessels so more oxygen can reach the white matter deep in the brain.

The helmet can be easily worn by patients, meaning the therapy can be readily delivered at home. Researchers believe it might also be beneficial to other disorders, such as Parkinson’s, traumatic brain injury or motor neurone disease. Each helmet costs approximately £7,250 to buy.

Dr. Gordon Dougal, research co-lead, of Maculume Ltd, said: “Current clinical practice can only set the stage for optimal recovery with little or no effect upon cellular function. Laboratory work exploring the mechanism of action of PBM-T1068, indicates this therapeutic tool may well help dying brain cells regenerate into functioning units once again.

“Much more research is needed to fully understand the mechanism of action.”

This pilot study follows 20 years of work by Dr. Chazot into identifying, developing and validating a particular wave-length of infra-red light for use in dementia therapy through a series of in vitro and in vivo pre-clinical studies.

These studies showed for the first time that PBM-T with a specific wavelength improved memory performance, and reduced beta-amyloid—a membrane protein that normally plays an essential role in neural growth and repair, but which later in life can increase and destroy nerve cells leading to loss of thought and memory in Alzheimer’s disease—in an Alzheimer’s mouse model.

Published in the journals, Cureus and Aging and Disease, and led by Dr. Jason Huang (Texas A&M University), those findings suggested that PBM-T1068—also known as Transcranial near-infrared (tNIR) treatment—had a similar profound and rapid positive effect on the condition for both men and women with mild to moderate dementia. 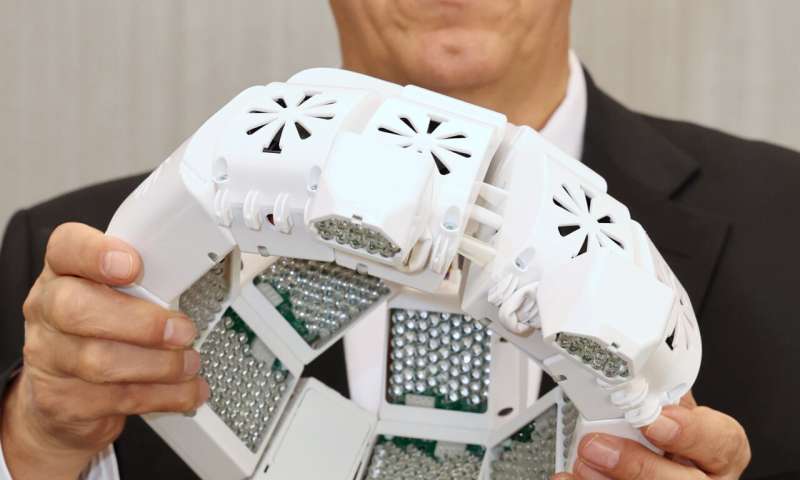 In the Cureus study, for example, 39 patients received six minutes of PBM-T twice a day for eight weeks, alongside a control group of 17 patients who used a dummy helmet.

After two to three weeks, participants reported having more energy, elevated mood and less anxiety, along with better physical and mental involvement in daily activities. Improved mood was also noted by caregivers.

Again no adverse effects were reported by participants or caregivers associated with the treatment during or after completion of the Cureus study.

After wearing the helmet for a few weeks she said she noticed improvements in remembering simple messages, which previously she would have had to write down or she would have forgotten them.

She also noticed that her sleep and moods improved.

Tracy, 56, a GP practice administrator from Peterlee, County Durham, is in general good health and has no diagnosed condition that would affect her memory. She was introduced to the therapy by Dr. Dougal.

She wore the helmet morning and night for six minutes each time over a period of three months. 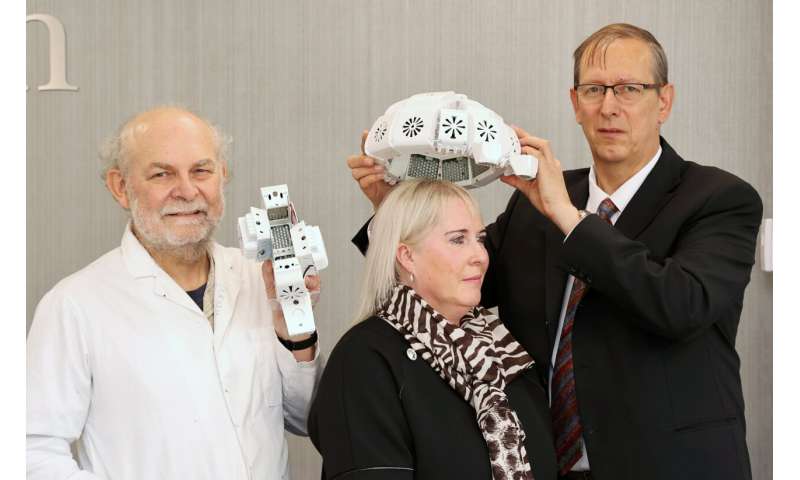 Tracy, who has two daughters and two grandsons, said: “I have a bad memory to start with and I think as you get older it gets no better, so I thought I would give the therapy a go.

“I wasn’t sure it would make a difference, but to be honest I think it did.

“After a few weeks I noticed that my sleeping pattern was better, I felt more relaxed and I had more energy.

“I’m not a moody person, but my youngest daughter said that I wasn’t as moody and my manager at the time used to laugh and say that the therapy must be working because I didn’t need to write things down.”

Tracy said the helmet was easy to use and on an evening she would wear it while watching TV.

“My kids would look at me and say ‘What have you got on your head?’ but I thought if this helps me in anyway then it is worth it,” she said.

“It was very light to wear and it could be plugged in while I was wearing it.”

Tracy no longer uses the therapy after her trial period and thinks that her poor memory has returned since she stopped.

She added: “I would love to use it again because it did help me, without a doubt.