The development of vaccines that are safe and effective in countering the severe acute respiratory syndrome coronavirus 2 (SARS-CoV-2), which is the virus responsible for the coronavirus disease 2019 (COVID-19), is largely considered the only way out of the current pandemic. However, there remain concerns surrounding the efficacy of COVID-19 vaccines in immunocompromised individuals.

A new study published on the preprint server medRxiv* describes how immunocompromised vaccine recipients may not always respond as expected to the  COVID-19 vaccine, thus indicating that booster doses or antibody treatments may be necessary for this subset of patients. 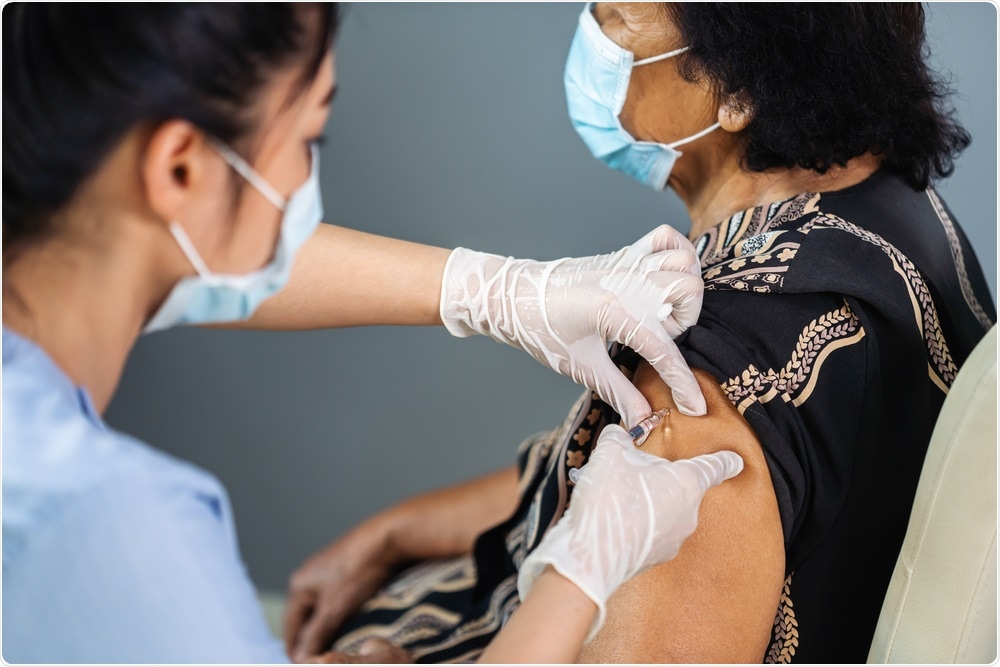 In the current study, the scientists aimed to define the parameters of cell-mediated and antibody-mediated immune responses following COVID-19 vaccination in immunocompromised patients. Earlier research has indicated that antibody responses are weaker in immunocompromised patients following vaccination with the SARS-CoV-2 vaccine; however, not much is known about the cell-mediated response in this group.

About 1 in 25 Americans have weakened immunity, which makes a significant portion of this nation’s population more vulnerable to severe COVID-19. As a result, immunocompromised individuals have been designated as a priority group for vaccination efforts.

The current study included 16 immunocompetent healthy healthcare workers who were tested at a median of 17 days after the second dose of BNT162b2 messenger ribonucleic acid (mRNA) vaccine, as well as 100 immunocompromised patients who had also received two doses of either the BNT162b2 or Moderna vaccine, which is also an mRNA vaccine.

The latter group contained those who had a history of organ transplant, blood cancer, autoimmune disease for which they were taking antimetabolites, or primary immunodeficiency.

What were the findings?

All healthy controls developed a positive interferon-γ release assay (IGRA), which indicates a normal T cell response to the vaccine antigen, whereas only about 70% of immunocompromised patients exhibited the same results. The median interferon-γ levels were similar in both groups. 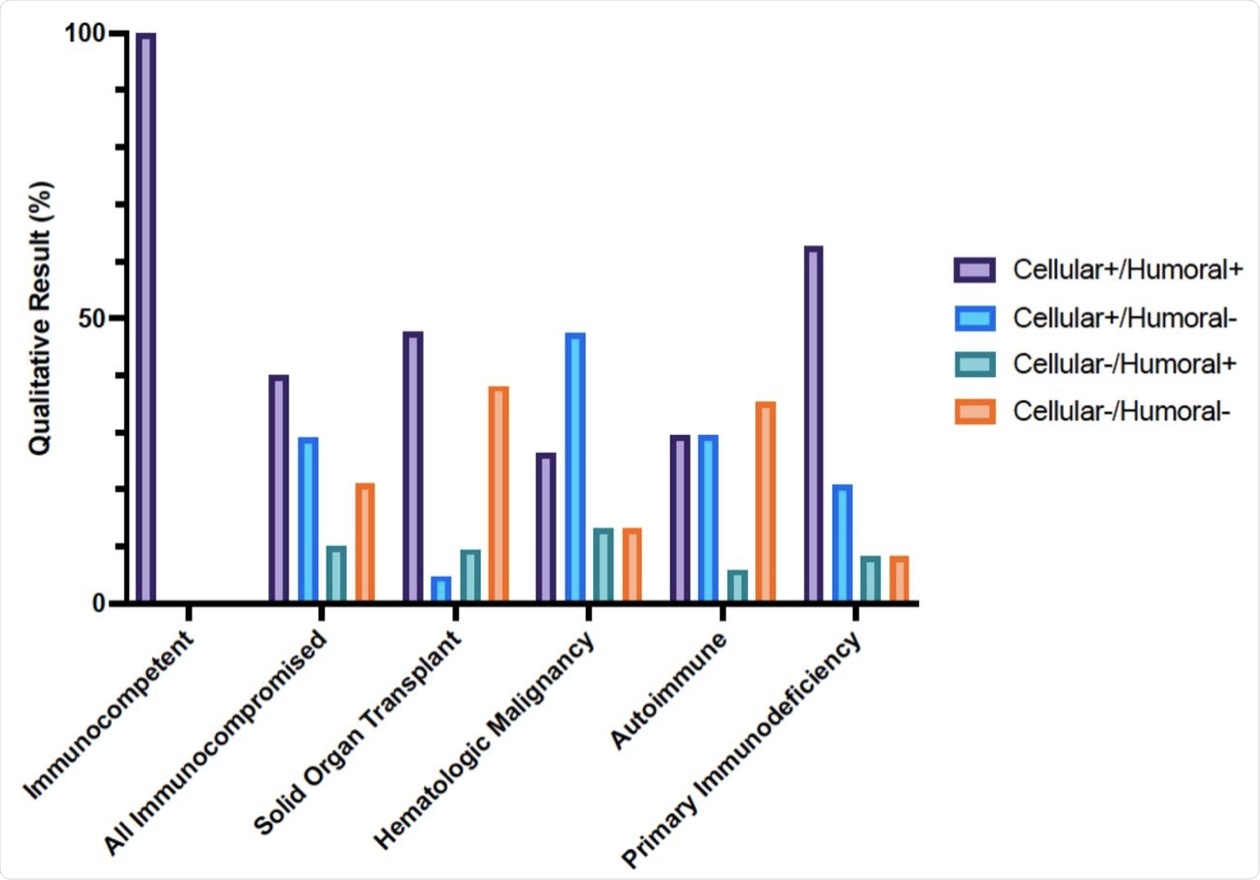 In 29% of the immunocompromised participants, the cell-mediated response was not accompanied by a detectable antibody response. Additionally, 10% of the patients in this group had IgG levels as their only positive immune response to the vaccine.

Among immunocompromised patients, both vaccines had a comparable response. However, those under the age of 50 had five times higher IgG levels as compared to older patients, all the while maintaining comparable antibody responses. 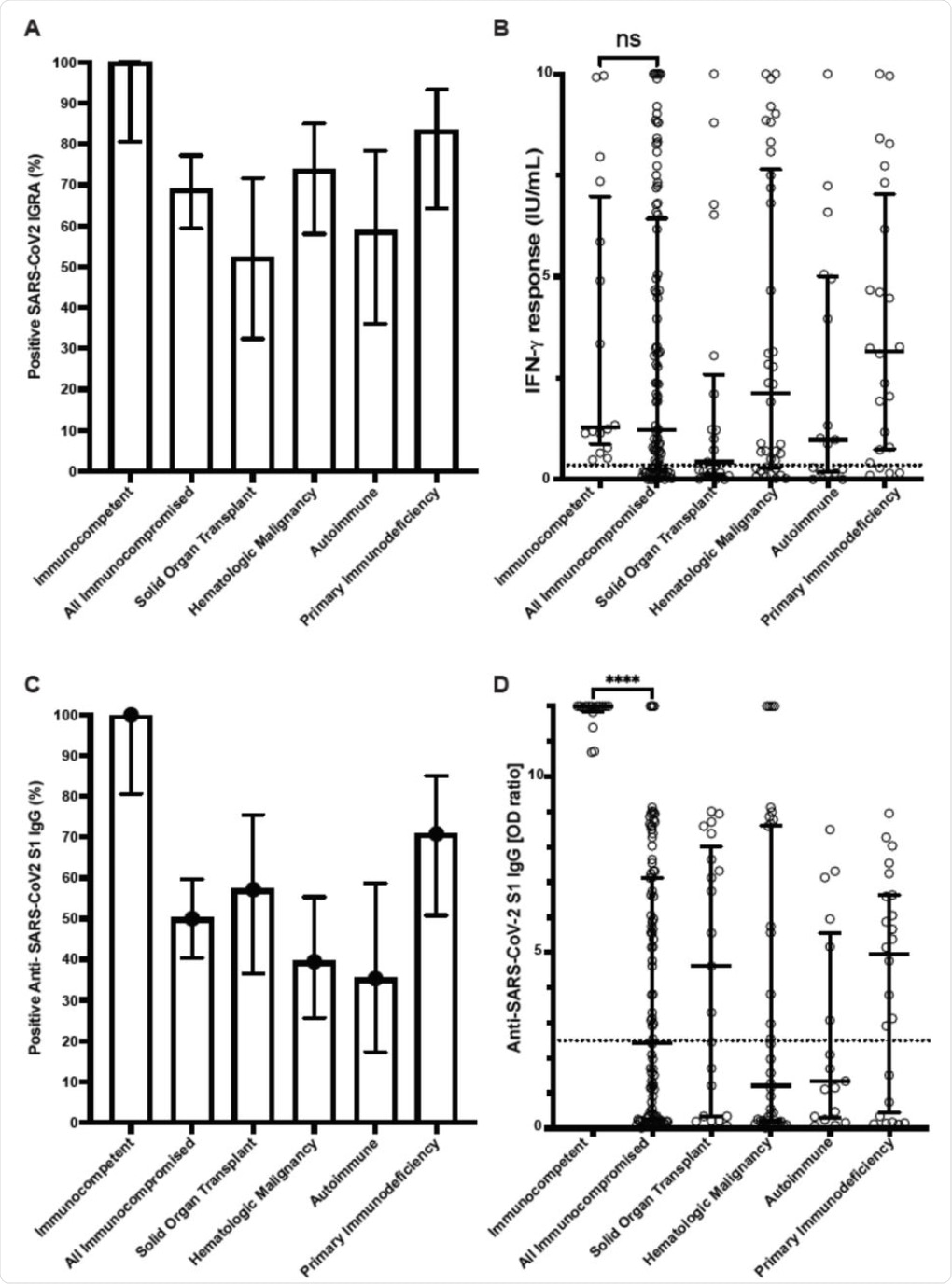 The current study shows that vaccines are less likely to elicit a humoral response against SARS-CoV-2 than a cell-mediated response. Conversely, no difference was found in the interferon-γ levels between the two groups.

A noticeable difference was reported in the response by either the humoral or cell-mediated immune responses between organ transplant recipients and those with autoimmune disease, with 35% to 38% failing to show one of these types of immunity, respectively.

Taken together, the findings reported here imply that the immune response to the COVID-19 vaccine must be monitored in immunocompromised patients, especially those who have received organ transplants, severe autoimmune disease, or who are older than 50. The use of IGRA or serological assays is recommended for this purpose.

By monitoring these patients closely, healthcare providers will be able to identify patients who may benefit from booster vaccines to increase their antibody and/or cell-mediated immunity, or from prophylactic monoclonal antibody treatment.

medRxiv publishes preliminary scientific reports that are not peer-reviewed and, therefore, should not be regarded as conclusive, guide clinical practice/health-related behavior, or treated as established information.