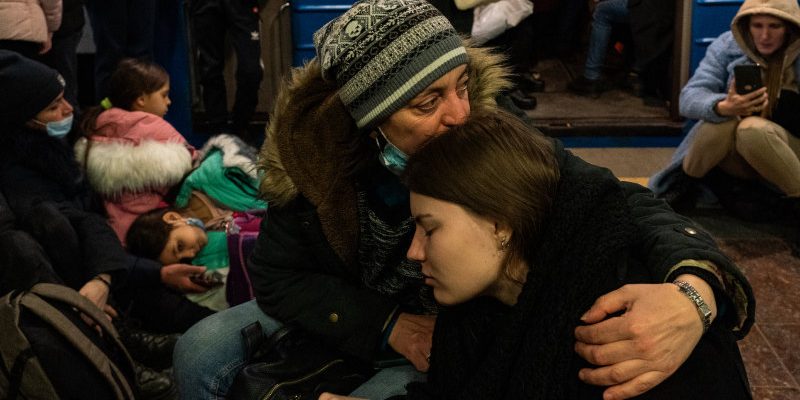 It’s hard not to be affected by the news coming out of Ukraine right now.

Ever since Russia’s invasion of Ukraine on Thursday, images have poured in of bombings, wrecked buildings, wounded citizens and displaced families fleeing for safety. 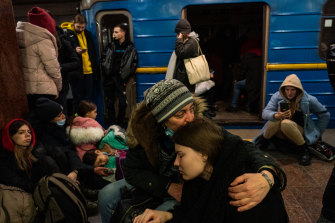 Hundreds of people take shelter inside a downtown Kharkiv metro station as explosions are heard outside on February 24. Credit:Washington Post/Salwan Georges

Even though the crisis is unfolding many kilometres away, it’s brought mentally closer by our access to constant news updates and our shaken sense of safety as a result of the pandemic.

“We have been living in a state of sustained trauma the last couple of years … and I think people are tired and fatigued,” Saunders says.

Clinical psychologist Tamara Cavenett, president of the Australian Psychological Society, adds that you may be impacted in a way that you might not have been three years ago.

“It’s not surprising if you’re overwhelmed by the possibility of another global disaster and lost sense of predictability around what’s happening in the world,” she says.

And for some people, vicarious trauma is possible. “Really strong emotions can happen when you hear a story that resonates with you,” Cavenett says.

There are tried and tested ways to deal with what you’re feeling.

Take regular breaks from the news and social media, Saunders says. “If you’re finding the content you’re viewing distressing, it’s healthy to take a break and put down your phone.”

He recommends putting your phone in another room and doing something that makes you happy, like going outside, watching TV or video-calling a friend.

We can’t control what’s happening in Ukraine, so Beyond Blue’s lead clinical adviser Dr Grant Blashki urges people to not get obsessed with every detail. Limit your consumption by switching off smartphone notifications and closing news and social media apps. “Make time windows to look at news, not first thing when you wake up, and don’t follow it blow-by-blow,” Blashki says.

And stick to credible news sources. “We live in a world where there’s a lot of hype and misinformation,” Blashki says.

While you shouldn’t stick your head in the sand, Cavenett says, try not to ruminate on the worst-case scenario. “Avoid catastrophising. A lot of focus in the news right now is on what could happen. We have to take things one day at a time.”

Stick to a routine

“Routine is really useful in making life feel a bit more predictable, especially during uncertain times,” Saunders says. “Our brains like things to be consistent and patterned so the more we can help our brain feel comfortable, the better placed we are to handle difficult situations.”

Consider simple behaviours like getting up at the same time every day, making your bed and going for a walk, he says.

Routine can also mean allocating certain times to worry and talk through it while keeping the rest of the day focused on other tasks that are in your control, Cavenett says. Plus, you’ll often find that when you return to thinking about it, your worry is lessened because you’re coming from a calmer perspective and can work through it easier.

Look after your body

It’s well established that physical activity is extremely valuable for managing mental wellbeing. So move your body, Saunders says, and reap the benefits of the endorphins.

Eating well, drinking plenty of water and prioritising sleep all help too, he says.

He adds that it’s important to have coping strategies for tough times. Exercise, yoga, meditation and other hobbies can be part of your toolkit.

Avoid the temptation to self-medicate with alcohol and other drugs. “They make things feel good in the short-term but mask the problem and make you feel a lot worse over time,” Saunders says.

Don’t be afraid to cry

“We are human. Emotions are here for a reason. It’s definitely a good idea to cry if you’re feeling it,” Saunders says.

Cavenett adds that crying has a real healing effect too.“We experience a beautiful endorphin release after crying and it’s actually very cathartic,” she says. “It’s also really good for our body to be told by us that it can experience emotion and be sad and that it’s OK.”

Share what’s on your mind with friends and family. As Saunders says, a problem shared is a problem halved. “It makes us feel supported, can boost our confidence and makes us feel energised,” he says.

Journaling can have a similar effect, as the idea is to help you untangle your thoughts.

If talking to loved ones isn’t cutting it, there’s no shame in reaching out to a counsellor or mental health service such as Headspace or Beyond Blue. Dr Grant Blashki recommends seeking professional help if your distress is interfering with your day-to-day life, affecting your sleep or dominating your thoughts and conversations.

Saunders says that young people who may never have seen such images of war might have a lot of questions. “It’s OK to say I don’t know. You don’t have to have all the answers.”

Cavenett says that if a child or teenager is worried, ask them what they’re thinking about and have an open conversation. Target their particular concern and give them realistic but age-appropriate answers. It’s also OK to tell them you share their worry, Saunders says.

Think about how you can contribute

“Look for ways to feel engaged and act part of a community because a sense of belonging can be really important right now,” Saunders says. “It promotes a sense of hope.”

Ukrainians have also compiled a list of organisations foreigners can donate to and directly help people affected by the crisis.

Charities providing humanitarian aid include United Help Ukraine, Razom for Ukraine, Sunflower of Peace, Revived Soldiers. The Ukrainian Red Cross is also doing a lot of work in this space. Organisations fundraising for supplies for the military include Come Back Alive and Army SOS.