There is a haunting scene in the 2000 film Requiem for a Dream, where Ellen Burstyn’s character Sara Goldfarb is wheeled into a room for Electroconvulsive therapy (ECT).

She looks terrified as a blunt is placed in her mouth, nurses hold down her head and metal rods are placed against her temples. Sara seizures violently as she is shocked again and again. When her friends come to visit her in hospital afterwards, Sara is a shell of her former self. Her hair has been cut short, and she is completely disconnected from reality. 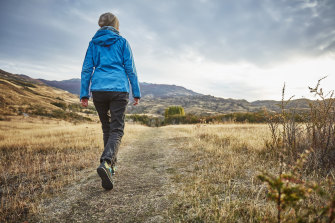 Brain stimulation helped my mum out of the deep hole of depression.Credit:Getty

This brutal portrayal of ECT as a cruel treatment with no therapeutic benefit is typical in movies. It’s the kind of depiction that caused my mum to say “no” when doctors urged her to have it years ago.

They told her ECT was the only solution for the intractable and debilitating depression she lived with. But she resisted.

“Even though depression is so painful and ghastly on every level I was scared, at a visceral level, of losing who I was because I didn’t know what it would do to my mind.

But, by that stage she had tried everything else and found no relief. Her psychiatrist, who she trusted, regularly explained the procedure and reassured her it could help. Eventually, she agreed.

“It was actually very gentle,” she says of the treatment, which took place under a light anaesthetic during a hospital stay.

When she woke shortly after, she felt “absolutely fine”: “I would go about the day as normal. I had no side effects.”

After multiple sessions in hospital she returned home and started to notice a difference. It was the first time a treatment had ever made a difference.

“I could get low, but I didn’t hit the extreme lows that made recovery just about impossible. It brought that deep depression level up to a point where it was more manageable,” she says.

“I feel that my baseline is steadier. Given how effective it was, it would have been great to have it many years earlier.”

ECT, one of a dozen or more techniques under the umbrella of brain stimulation, is not what it once was.

Around for more than 2000 years, Romans used electric eels placed over a patient’s head as a “pretty intense” form of brain stimulation to relieve headaches, says Dr Stevan Nikolin, a research fellow and neuroscientist at Black Dog Institute.

Since then, the techniques, which can include magnetic or electrical stimulation, are non-invasive (where electrodes are placed on the head) or involve deep-brain stimulation (DBS which is much less common and requires surgery), are continually evolving and being refined.

Today, brain stimulation is being explored as a treatment, not just for depression (or headaches) and other hard-to-treat mental illnesses, but for Alzheimer’s, stroke, epilepsy and OCD. There is even a “more lofty goal” among researchers of enhancing the way healthy people’s brains work.

“The idea would be trying to improve people’s ability to stay on task – that’s been looked into for a range of applications,” Nikolin explains. “So looking to improve a pilot’s ability to focus on their instruments while flying. Looking at improving attention in soldiers to detect threats that might be coming their way. At this stage it’s just research and not ready for packaged use, but there are a lot of interesting people who are trying to make it happen, and I wouldn’t discount the possibility.”

And the possibilities of brain stimulation are many.

Some participants had severe anxiety as well as epilepsy, so the researchers targeted the part of the brain responsible for cognitive control – the ability to move from one thought or behaviour to another – which is often impaired in mental illness like depression or severe anxiety.

Using DBS and a closed-loop system (CLS), where stimulation is applied and then adjusted according to brain activity monitors, the researchers could “boost” the function of the part of the brain that wasn’t working as it should and thereby improve cognitive control and reduce anxiety.

“It’s fascinating,” says Nikolin. “It’s still early days but it seems to be showing that the closed-loop system lets you be much more accurate, much more precise and a lot more individualised in your attempts to alter the way the brain works.”

At the moment, CLS is not possible in non-invasive treatments because the electrical or magnetic stimulation interferes with the brain activity readings, but it’s not far off, says Kate Hoy, a professor of psychiatry at Monash University.

“I expect that’s something we’ll see in the next one-to-two years,” says Hoy, also the head of Interventional Neuropsychology and deputy director of the Epworth Centre for Innovation in Mental Health. “Any time we can personalise the brain stimulation approaches we believe it will be more effective.”

Meanwhile, she says: “We’ve certainly come a long way from stimulating the brain region and saying ‘let’s just see if the mood changes’.”

In non-invasive techniques, the currents used are typically much lower than they once were and the target of stimulation is more precise, often down to one centimetre or less in a region of the brain.

And while there is promise in various disorders, the strongest current evidence is as a treatment for depression, for which it is a low-risk procedure with minimal side effects.

The efficacy, in depressed patients who have tried two rounds of medication and then brain stimulation versus patients who are on their third round of antidepressants, is “roughly comparable”, Nikolin says.

“With depression it really depends on the underlying issue that’s causing the symptoms,” he adds.

Depression can be caused by a chemical imbalance or environmental factors, like trauma or abuse. More recently, it has been discovered that functional problems can also be a cause.

“What we mean by that is that the various parts of the brain and the way they communicate with each other – these networks that develop in the brain – might be out of sync or maybe not communicating quite the way they should. Some areas might be too strong, some might be too weak,” Nikolin explains.

“Because that’s a connectivity issue, one way you can tap into and change connectivity is electricity. You can think of it as wires that might not have been plugged in the right way but maybe flushing things through with a current can encourage those wires to re-engage in the way that they need to. That’s why we think it is effective in depression.”

Despite this, the non-invasive approaches are unlikely to ever be the first port of call as a treatment, simply because there is less established evidence for brain stimulation than for drugs, for instance. Risk versus benefit is always weighed as well.

Still, there is excitement about the potential of these treatments, says Hoy, whose lab is currently running multiple studies exploring brain stimulation on Alzheimer’s and one on anxiety: “We feel there is hope in these treatments. There is certainly some way to go in optimising them and personalising them, but there is a really significant potential for these types of brain stimulation treatments to significantly change the way brain-based disorders are treated.”