I was a nursing supervisor in my 40s working at a methadone clinic in Baltimore, Maryland, when I was diagnosed with a sinus infection and bronchitis. It was the first week of October 2019, and I was prescribed antibiotics, as you’d expect. But after I finished the round of medication, I still had a very runny nose.

At first, I thought nothing of it—I’d dealt with plenty of sinus infections before, and maybe I had developed another one already. But one month later, my nose was still running nonstop, and it was noticeably worse whenever I leaned forward. Even stranger? The clear, slightly salty liquid coming from my nose only came out of my right nostril.

A few weeks later, I decided to visit my primary care doctor again. She, too, suspected that I might just have another sinus infection. So to help dry up my sinuses, I started taking over-the-counter decongestants. Still, nothing changed. I felt horrible.

In bed at night, fluid dripped down the back of my throat, making me cough and choke in my sleep.

I would stuff my nose with tissues until they were soaked. Then, I tried to make a contraption that I could wear to let my nose drain while I slept upright, but that didn’t work either. Eventually, I just started sleeping with a towel on my pillow and letting it run, which was a little more comfortable.

Because I could hardly sleep, I was low on energy, easily tired out, and irritable. I felt bad for my husband and daughters (14-year-old twins and a 29-year-old) because I developed a very low tolerance for noise. Actually, I didn’t have much tolerance for anything those days. After I got home from work, I’d just stay in because I was embarrassed when I noticed people staring at me with tissue stuffed up my nostrils.

I sensed that my family was concerned—and at that point, I knew something had to be wrong.

I started Googling “constantly runny nose on one side only” and “clear thin nasal drainage from one side.” As I went down the rabbit hole researching my symptoms, I started to suspect that I had a cerebrospinal fluid leak, also known as a CSF leak, a rare condition where a hole or tear forms in the outer membrane that cushions your brain and spinal cord with fluid, allowing it to leak out.

Usually with my sinus infections, I also had some nasal congestion in one or both nostrils. As I learned, though, with a CSF leak, you have no congestion—just constant, salty drainage from one nostril (or ear), which can flow down your throat. In some cases, you also experience other symptoms, like frequent headaches and increased sensitivity to light and sound. I had been dealing with those issues, too. 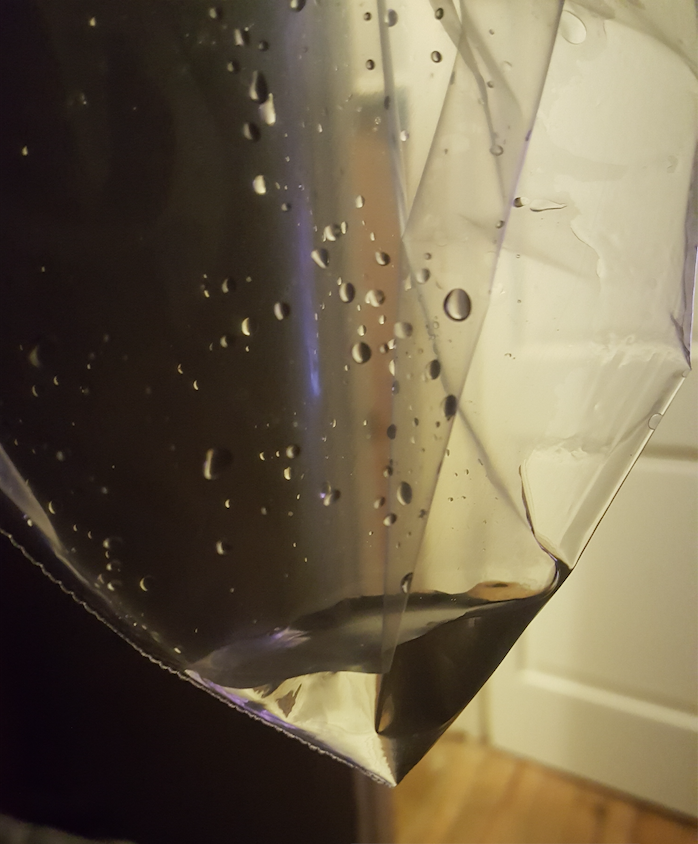 The amount of liquid that dripped from Hart’s nose in 45 minutes.
Afrikus Hart

The first week of November, I went back to my doctor so that I could stress that this was *no* sinus infection.

After a month of dealing with these symptoms, I knew I needed to bring the information I found and discuss my symptoms at length, considering I still hadn’t found relief. When I told my doctor I thought I might have a CSF leak, she agreed and sent me to the lab to have my drainage tested for beta-2 transferrin, a protein found almost exclusively in cerebrospinal fluid. It came back positive: I did, in fact, have a CSF leak. After months of frustration, I felt so relieved to finally know what was going on with me.

Within two weeks of my diagnosis, I had CT scans and MRIs done so that doctors could look at the flow of my brain fluid in order to reveal the location of the leak. Typically, CSF leaks are caused by some type of head trauma, surgery, or a rise in pressure around your brain. But apparently none of those things had happened to me. I had a spontaneous leak with no clear cause. 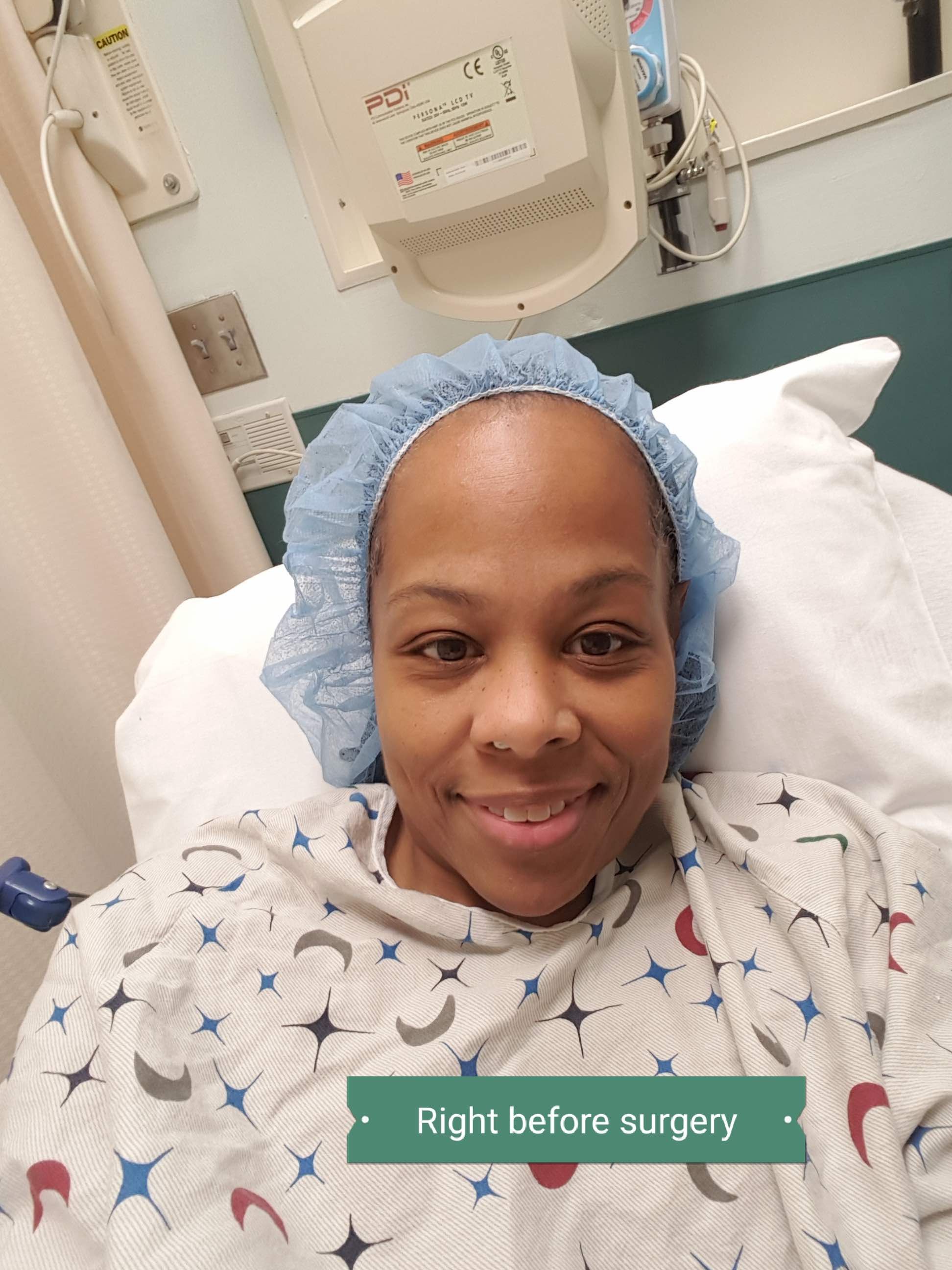 A few weeks later, on December 20, 2019, I had surgery. I remember so clearly because it was the day after my birthday. My daughters were afraid I was going to die, and my husband was nervous, too. I tried my best to downplay it for them and have faith that I’d be okay.

I had endonasal surgery, where a camera with a thin lens gets inserted through the nostril, along with surgical tools to repair the leak. I remember being wheeled into the operating room, seeing the anesthesiologist hovering above me, and praying.

Once I was under, the surgical team prepped me by starting IVs, inserting a lumbar drain into my mid-lower back, and putting a line into my left wrist to monitor my heart rate and pulse. Then, they used the drain to inject a dye so that they could identify exactly where the leak was coming from and make sure any and all leaks were sealed using tissue from my nose. Nearly six hours later, I woke up in a recovery room with a nurse and my husband and daughters by my side.

“After months of frustration, I felt so relieved to finally know what was going on with me.”

The recovery process was slow and steady. For the first couple of days, I needed help walking because my balance was off. My husband and my girls helped me walk, eat, and bathe. All in all, I was in the hospital for six days.

Two days after my release from the hospital, I had a follow-up appointment, and my doctor took the packing out of my nose and removed stitches from my back where the drain had been. The first week, I just rested and tried not to do too much. My husband, mom, daughters, and sisters helped take care of me. By the third week, I was up and moving around more.

As of today, it’s barely been eight weeks since my surgery. I’m still recovering, but it feels good to no longer be leaking. I have multiple follow-up appointments ahead of me for MRIs and lumbar punctures (aka spinal taps) to monitor blood vessels and pressure in my brain, but so far I haven’t had any more leaks or complications. To this day, what exactly caused my CSF leak remains unknown. 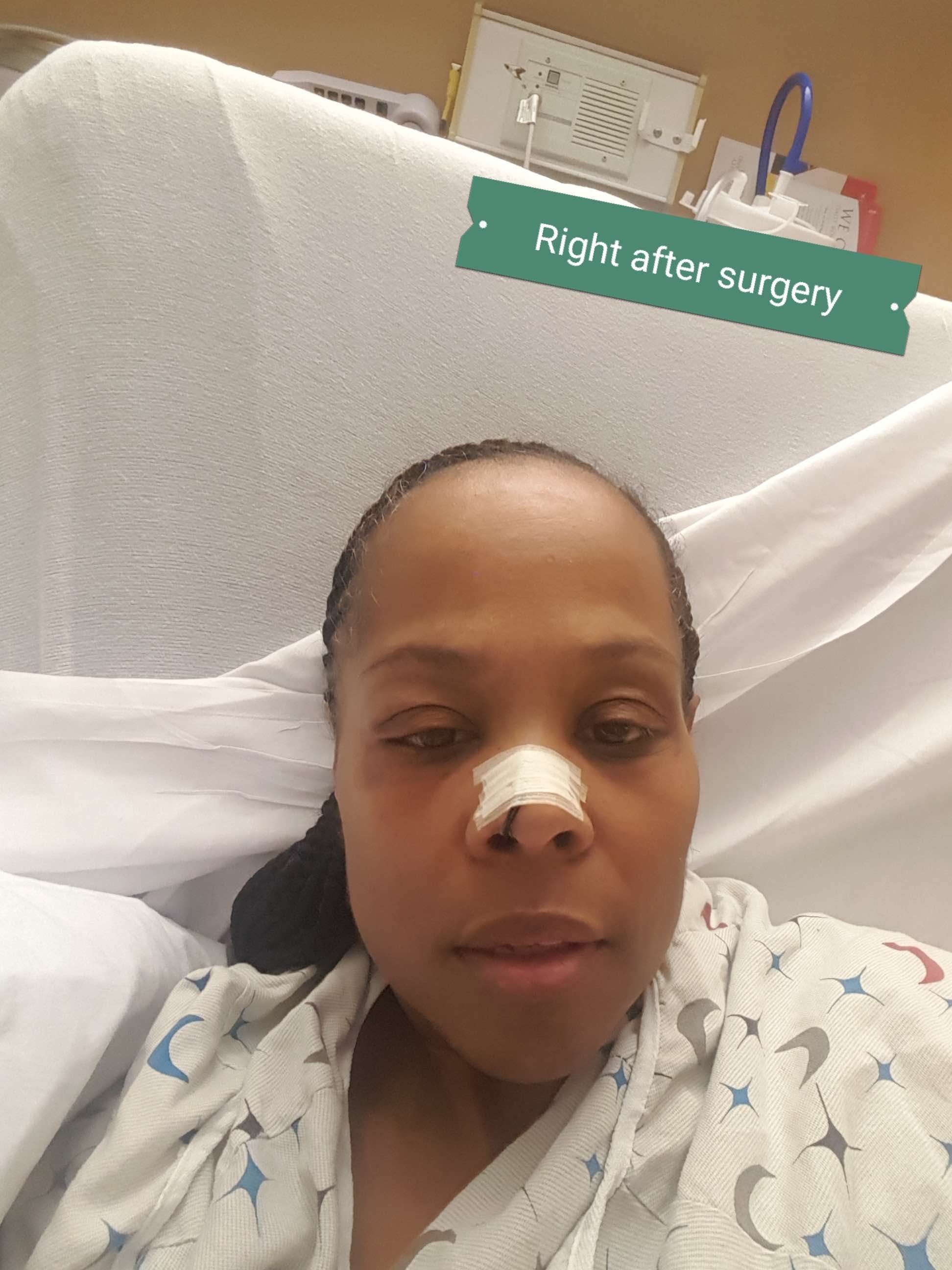 I thank God because I know my situation could have been worse.

In any given year, at least five in 100,000 people have a CSF leak, and women seem to be twice as likely as men to develop one, according to the CSF Leak Association. However, CSF leaks are often misdiagnosed as sinus infections or migraines, and I’ve heard horror stories of people who suffer for years without knowing what’s happening to them. Sometimes, symptoms and complications of CSF leaks are more severe, too, like chronic pain, seizures, and a greater risk of meningitis.

I’m grateful that as soon as I was diagnosed, my doctors acted swiftly to assist me. I’m also thankful for all of the support I received from my family, friends, and co-workers.

I want other people to know that if you suspect there’s something wrong with you, you should feel empowered to voice your problem to a doctor—even if it does end up being nothing. In my case, while CSF leaks are rare, it really was more than just a cold, or a sinus infection, or allergies. So I’m happy that I did my research and went back to seek help a second time when I wasn’t getting better. My takeaway: Be persistent and don’t be afraid to advocate for yourself.