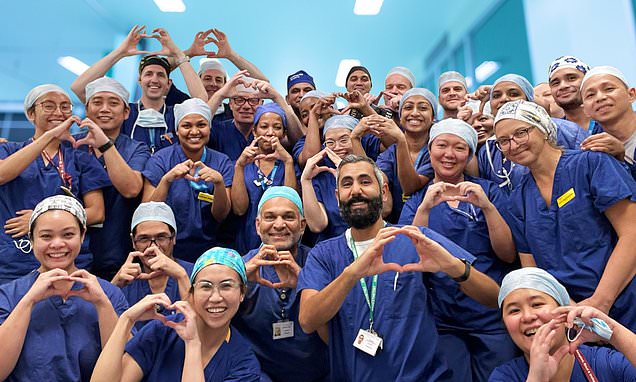 Dr Imran Ahmad was pedalling away on his spin bike one Saturday morning last year when he had a big idea — one that could help save the NHS.

A consultant anaesthetist at Guy’s and St Thomas’ Hospital in London, he suddenly envisaged a team of surgeons and theatre staff who could tackle the backlog of patients waiting for surgery.

It would work like a Formula One pitstop team, performing precision-planned, swift operations with a high-speed changeover.

And so the Guy’s and St Thomas’ high-intensity theatre (HIT) team was born — and it has proved every bit as turbocharged as its racing inspiration.

In one astounding day last month the team completed eight prostate cancer operations by 5pm — under the standard system, they would have done just three, finishing at 7.30pm. It’s the most spectacular result in HIT’s 18 outings (across different specialties including joint replacements) to date. 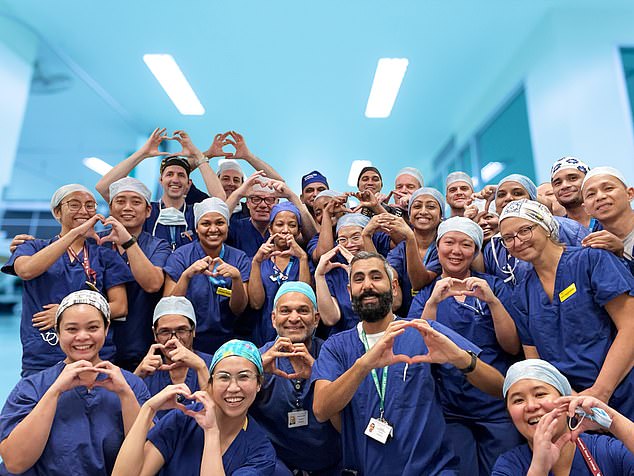 Dr Ahmad was able to get management onside as he holds a position of authority, as deputy clinical director of the trust’s operating theatres. The Formula One pitstop in his analogy is the operating theatre. ‘I wanted surgeons to spend 90 per cent of their time in theatre performing operations,’ he says

‘Our efficiency was pretty phenomenal,’ says Dr Ahmad, proudly. The trick, he says, is in the planning: ‘As on the race track, everyone has a role, everyone knows exactly what to do and they do it very well.’

It is heartening to see amid the gloom surrounding the state of the NHS, and fears it may buckle under pressure.

Frightening new figures reveal more than seven million people are on a waiting list for NHS treatment; ambulance response times for serious incidents are more than double what they should be; and a record 32,776 people were waiting in A&E for more than 12 hours in September. Just some of the many metrics that illustrate a health service on its knees.

Amanda Pritchard, chief executive of NHS England, said recently that the health service was struggling to plug a £7 billion shortfall in its budgets. But this isn’t all about money; disaffected medics have been complaining for years about the NHS’s stifling bureaucracy.

Dr Ahmad was able to get management onside as he holds a position of authority, as deputy clinical director of the trust’s operating theatres.

The Formula One pitstop in his analogy is the operating theatre.

‘I wanted surgeons to spend 90 per cent of their time in theatre performing operations,’ he says. Currently most only operate for 30-40 per cent of their day because time is taken up with ward visits and waiting around while patients are anaesthetised or in recovery after surgery.

That meant carefully streamlining all the processes around them to allow them to get on with the job. Ironically, Covid was the catalyst for this innovative change. Dr Ahmad found himself at the frontline of the Covid pandemic as desperately ill patients, struggling to breathe, threatened to overwhelm intensive care. He came up with an emergency response, rearranging his staff into fast-moving teams for intubation, tracheostomy and critical care. 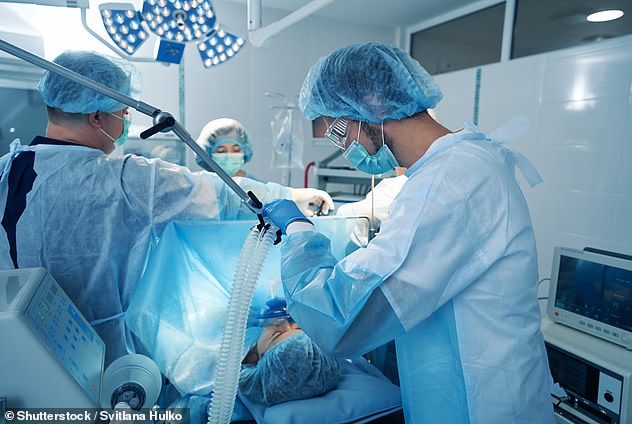 It would work like a Formula One pitstop team, performing precision-planned, swift operations with a high-speed changeover. A stock image is used above [File photo]

Waiting lists for other treatments were already growing when he had his eureka moment on the exercise bike: ‘I thought “Why don’t we do the same thing to manage the huge surgical backlog?” ’

The HIT teams he had in mind would perform operations at a rate over and above the norm, and that meant working on Saturdays, a day usually free of pre-booked surgery.

Dr Ahmad reckoned that if they chose day-case surgeries that are relatively short — preferably under an hour — they could create a sort of medical conveyor belt. An added advantage would be that taking simple surgeries off the regular lists would create space for more complex operations during the week.

He began by looking closely at the ‘patient pathway’ and working out how that could be streamlined — taking a group who all needed a similar hernia op, for instance, working out how preparation for surgery could be done as a ‘one-stop shop’. Blood samples, consent and pre-op fitness checks could all be done in tandem.

If he doubled the size of their usual team, they could perform four times as many operations.

Using two theatres at a time could allow surgeons to ‘hop back and forth’ between them. More nurses, assigned to cleaning and readying the theatre for the next patient, have reduced the time needed to complete their tasks from 20 minutes to five.

The incentive for staff is an extra day’s pay at a higher weekend rate. ‘And everyone gets paid until 5pm however early we finish,’ says Dr Ahmad. ‘That’s important because it reverses the norm in the NHS, which is that you get given extra work just as you are finishing and don’t get paid for it.

‘I also buy lunch — pizzas for everybody — and because we have extra staff, everyone gets a break. Most importantly, there’s a sense of achievement. It’s fun because it’s a team thing.’ So far, HIT teams have worked on 18 Saturdays, over eight specialties, including knee and hip replacements and breast cancer surgery.

They have carried out 344 operations and hope to take that number to 400 by the end of the year.

Word of the team’s success has got around: the Department of Health and NHS England have asked Dr Ahmad to give a presentation and he has been approached by hospitals abroad wanting to copy the idea.

‘About 80 per cent of the seven million on the NHS waiting list would probably fit the HIT criteria,’ says Dr Ahmad. ‘There are at least 1,000 hospitals in the UK so if we could scale this up, if even 50 or so could do this once or twice a month, imagine the dent we could make in that waiting list.’

Not all hospitals are suitable for setting up a HIT team — they need a spare operating theatre in case of emergencies, so should have at least three. 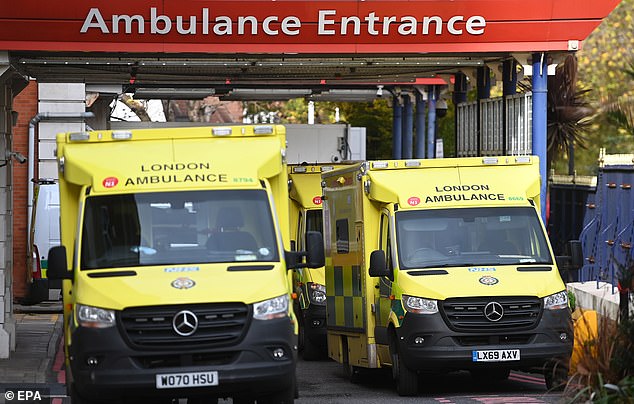 Frightening new figures reveal more than seven million people are on a waiting list for NHS treatment; ambulance response times for serious incidents are more than double what they should be; and a record 32,776 people were waiting in A&E for more than 12 hours in September

The prostate cancer surgery carried out last month is the most complex attempted so far. Four surgeons took turns at the operations, which take 90 minutes and involve robots for precision.

Ben Challacombe, a consultant surgical urologist, carried out the operations in the shortest turnaround between patients — just over 30 seconds. ‘I put it on Twitter and it got 40,000 views. People were commenting from around the world. I’d never seen anything like it.’

HIT was a challenging day ‘but there was a feeling of energy and togetherness’, he says. ‘There’s a special smile around the hospital among people who’ve been part of the teams, because you know you are doing something special.’

Patient care was uppermost in his mind.

‘These men had cancer so they needed support. The specialist nurses who provide that were amazing, as were the admin team who scheduled the appointments carefully to make this work.’

Mick Jennings, 59, was one of the patients operated on that day. He was diagnosed in early September, after a blood test revealed he had a raised level of PSA — a marker for prostate cancer. ‘It was a bit of a shock … of course, you think of your family,’ he said.

All eight of the men operated on that day were at pre-op together. ‘We all met again on the day of the surgery and again when we had a post-op check-up so we became a kind of gang of friends, and some of us are still in touch on WhatsApp,’ added Mick. ‘Sending words of encouragement as we recover, and having those kindred spirits has been a good thing for us all.’

A month on, Mick, an anaesthetist at the nearby Lewisham Hospital, is recovering well and contemplating his return to work.

He agrees that other hospitals would do well to replicate the HIT initiative.

‘It shows that if you listen to the people who are in the health service and empower them to follow their ideas, it can work very efficiently,’ he says. ‘If you ask the clinical staff in any hospital what’s wrong with the service they’ll give you an honest answer — and may have a good idea of how to fix it.’

Best sleep position for you

This week: Sleep on your left if you have heartburn

Heartburn, also known as acid reflux, is caused by stomach acid flowing back up the oesophagus. A Dutch study published in the journal Brief Communication: Esophagus earlier this year found that while reflux happens in all sleep positions, in people sleeping on their right-hand sides the acid stayed in the oesophagus for an average of 90 seconds; on their backs it remained for 76 seconds, but when they slept on their left-hand sides it cleared within an average of 35 seconds. This reduces the risk of symptoms that disturb sleep and lowers risk of damage to the oesophagus that can raise the risk of oesophageal cancer. The reason for this is still being studied.