DR MAX THE MIND DOCTOR: Hoping for a safe bet by gambling online? Now that IS high stakes

For my patient Tanya*, it started innocently enough. Off work after an operation, she was bored and killing time online when she clicked on a pop-up advert for a betting site.

‘It seemed like fun,’ she told me. ‘The advert had women just like me in it. It was just a laugh.’

And at first it was fun. Then it became a daily treat to break up the monotony, Then it began turning into something sinister.

‘It started to really control me. It was actually scary,’ she said. 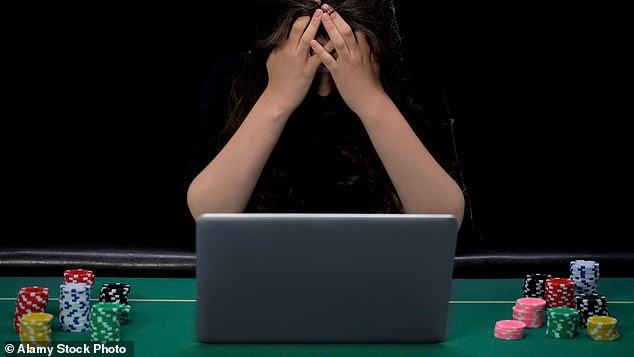 I am increasingly worried that during lockdown many more will have fallen victim to online gambling, writes Dr Max Pemberton (file photo)

Before long, gambling online dominated her every waking hour. The outcome is as predictable as it is sad. She lost her job, got into debt and was evicted from the flat she rented.

It took a further two years and a spell of homelessness before she sought treatment for her addiction and turned things around. But it left her with shattered self-confidence and ongoing anxiety.

Tanya’s story is far from unique. But I am increasingly worried that during lockdown — confined to the home with no work, no structure and isolated from friends and family — many more will have fallen victim to online gambling. Initially finding some sort of solace, their habit starts careering out of control.

The All-Party Parliamentary Group for Gambling-related Harm recently called for a ban on all betting adverts in order to curb the devastation this addiction causes.

This week, the House of Lords Gambling Industry Committee called for stake limits, a slowdown of online play and a ban on gambling advertising around sports.

It’s about time. We’ve heard a lot about alcohol use increasing during the lockdown, but I’m seeing patients for whom the legacy of lockdown is a gambling addiction.

Now, I don’t buy into the ‘disease model of addiction’, which holds an individual is entirely helpless in the face of their craving.

I believe that, while addiction may have complex psychological dimensions, ultimately — unlike other diseases — we are in control of our behaviour. 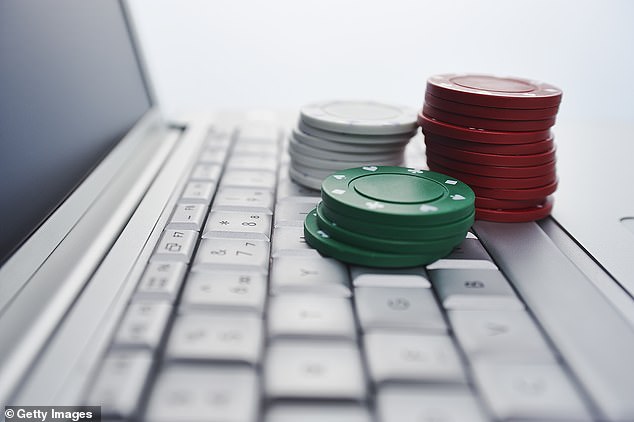 As bets are placed the brain releases the neurotransmitter dopamine, which creates euphoric feelings — exactly what happens when someone takes cocaine (file photo)

Having said that, vulnerable people need to be protected. They’re up against a multi-billion-pound industry and so the dice, if you’ll excuse the pun, is loaded against them.

MPs have said the Gambling Commission, charged with regulating the industry, has ‘failed to adequately protect consumers’ as business moved online. From a clinical perspective, gambling addiction is a fascinating, albeit tragic, phenomenon. People mistakenly believe it’s the winning that keeps gamblers hooked. It’s more complicated than that.

There are several elements that make it addictive, based on the way it ‘fires up’ the reward pathways in our brain, even if a gambler isn’t rewarded by a win.

The buzz of the expectation is incredibly intoxicating. Indeed, the neuroscience shows that gambling addiction involves many of the same neurological pathways as drug addiction.

As bets are placed the brain releases the neurotransmitter dopamine, which creates euphoric feelings — exactly what happens when someone takes cocaine. 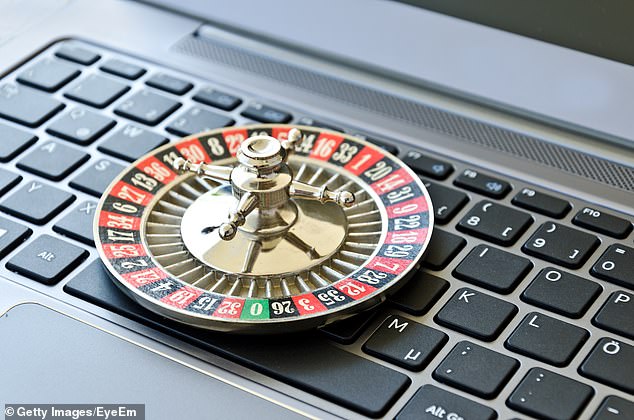 We’ve heard a lot about alcohol use increasing during the lockdown, but I’m seeing patients for whom the legacy of lockdown is a gambling addiction, says Dr Max Pemberton (file photo)

The mind also plays a role in perpetuating the addiction by falling into ‘cognitive errors’ — false beliefs or incorrect thinking patterns. The ‘gambler’s fallacy’ is the mistaken belief that if an event happens repeatedly, a different event is imminent.

It’s this which keeps gamblers hooked. With each loss, they become more convinced a win is inevitable, fuelling their behaviour.

Interestingly, many gambling addicts report feeling hopeless about other aspects of their lives. By gambling they are giving themselves hope. That’s why they keep going back for more.

In the past, psychologists viewed gambling as a compulsion rather than an addiction. It was motivated by the need to relieve anxiety rather than a craving for pleasure. We now know that it’s more akin to addiction, yet we still don’t treat it accordingly.

While drugs and other substances that cause addiction are tightly regulated, or outlawed, gambling gets a free pass.

It makes no sense that it’s treated in such a lax fashion, given the devastation not only to the individual, but the loved ones dependent on them.

While people should be free to choose to gamble if they want, we cannot allow the vulnerable to be psychologically and cynically manipulated by the multinational gambling companies for profit.

*Names have been changed.

Insight is vital, a degree is not!

In a bid to meet Boris Johnson’s pledge for 20,000 new police officers, fast-tracking for graduates and enrolling officers in ‘on-the-job’ degrees have been ditched. This has been met with accusations that the police force is being ‘dumbed down’.

I disagree. Police officers should not be required to have a degree. The idea that those with one are somehow better equipped for policing is a fallacy.

The same principle was applied to nursing. But when it comes to working with people, there are some things you can’t learn from a textbook. Care, compassion, how to de-escalate a situation, and so on, are all vital skills for working on the front line. 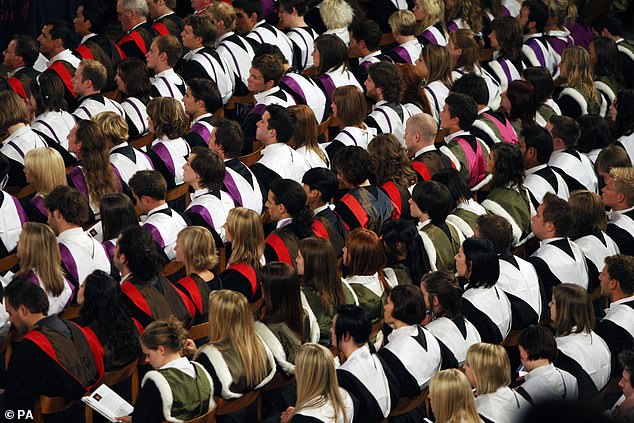 In a bid to meet Boris Johnson’s pledge for 20,000 new police officers, fast-tracking for graduates and enrolling officers in ‘on-the-job’ degrees have been ditched (file photo)

This over-professionalising of vocational jobs hasn’t resulted in better recruits, just people saddled with more debt who go ‘by the book’ rather than using their initiative or practical experience.

I once worked with an elderly Irish nurse in A&E. She didn’t have a degree, but what she didn’t know about medicine wasn’t worth knowing.

I remember watching her calm a rowdy group of drunk lads on a stag do, before consoling a family whose daughter had just died.

To think her insight is deemed of less value because she doesn’t have a certificate is ludicrous.

While some people are celebrating the end of lockdown (and a return to normality of sorts), others are anxious — including the nation’s Domestic Goddess, Nigella. She has, she said, become ‘utterly content with desocialisation’.

There’s no doubt there were — and still are — many people who felt lonely. But the past few months has given us respite from the constant merry-go-round of socialising.

As we emerge from lockdown, perhaps the take-home message isn’t that we like our own company, but rather we need to be more selective about the company we keep.

Once again I am bowled over by the kindness and generosity shown by our readers for the Mail Force charity, which is doing so much to help those working in the NHS.

The charity announced this week that it has now bought a staggering £10 million worth of personal protective equipment (PPE) for front-line workers. As one of those workers, I just want to say an enormous thank you to everyone who’s donated.

We’re all truly grateful — and your continued support means the world to us.

Actor John Barrowman has gone to war with snobby theatre critics for mocking Culture Secretary Oliver Dowden’s plans to save pantomimes as part of the government’s arts bailout. 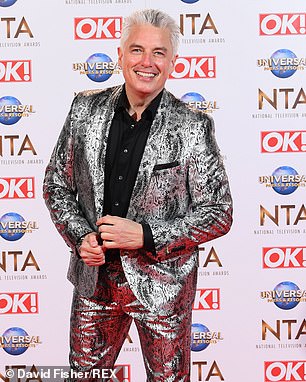 John Barrowman, above, has gone to war with snobby theatre critics for mocking Culture Secretary Oliver Dowden’s plans to save pantomimes

He told them to ‘p*** off’. Quite right! I loathe this elitist view of what theatre should be. I love a pantomime.

In fact, every year for ten years, as a youngster, I took part in our local amateur pantomime to raise money for Thames Valley Hospice.

I’ve gone to at least one panto every year since. They are not only a staple of the regional theatre calendar, providing vital revenue, but a wonderful introduction to the dramatic arts for children, too.

They have their roots in the old English Mummers’ plays — folk plays — and are a rich part of our cultural heritage. Moreover, they can provide an important psychological insight for children, offering complex moral dilemmas and demonstrating the triumph of good over evil in a light-hearted way.

Ibsen isn’t for everyone. Sometimes we all need a bit of Widow Twankey in our lives. Oh, yes we do!

We’re often told that men don’t do enough to look after their health. Statistics show that one in five men dies before the age of 65, they have worse health outcomes compared to women — and they die, on average, 3.5 years sooner.

But the Men’s Health Forum was set up to address this inequality and improve health. Its Man Manuals — which are presented like a car handbook — provide useful, no nonsense guides in an accessible format, and cover everything from beating stress to improving diet (mens healthforum.org.uk/man-manuals).