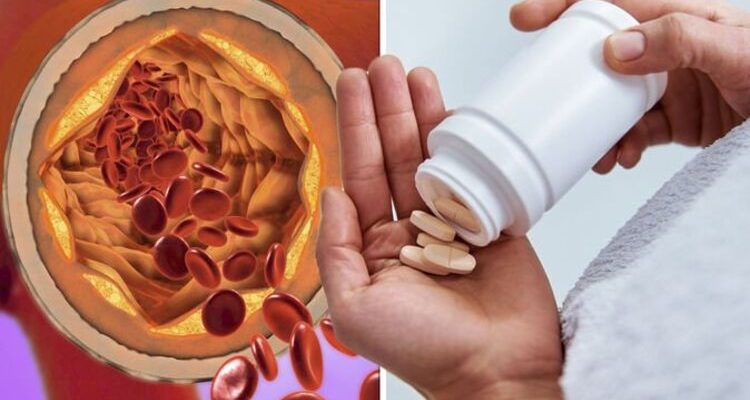 Cholesterol is a fatty molecule found in the body and in food that is needed for a number of bodily functions. But the condition was vilified after scientistic discovered it contributed to the formation of plaque in the arteries. This causes the passageways to narrow progressively over time, limiting blood flow. Fortunately, two studies have shown that one herbal supplement could slash cholesterol levels by 25 percent in months.

Berberine is a bitter plant-derived chemical that has long been rumoured to help strengthen the heartbeat.

But in recent years, the supplement has also proven useful in the treatment of diabetes, high cholesterol and high blood pressure.

Studies suggest the supplement could increase the production of receptor proteins in the liver, which binds to LDL molecules and excrete them from the body.

Writing in the journal of Evidence-Based Complementary and Alternative Medicine in 2017, researchers explained the supplement could be effective in treating elevated lipid profiles.

READ MORE: High cholesterol: The ingredient found in many foods that may ‘significantly’ lower levels

They wrote: “Preliminary animal and pilot human studies have shown that berberine produces a positive effect on the lipid profile.”

One study conducted on 32 patients, who weren’t receiving any treatment for their condition, were given 500 mg of berberine twice daily for three months.

“In these patients, significant reductions in LDL, triglycerides, and total cholesterol were seen from baseline,” noted the authors.

LDL cholesterol was reduced by 25 percent, while triglyceride levels fell by 35 percent and total cholesterol fell by 29 percent.

The findings are consistent with another small-scale study, conducted on 63 patients over a period of two months.

Here, supplementation with berberine at a dose o 500 mg twice daily lowered LDL by an average of 23.8 percent.

What’s more, combining the supplement with the 20mg of the cholesterol-lowering drug simvastatin daily lowered LDL cholesterol by an average of 31.8 percent.

The research also revealed that the supplement successfully augmented levels of HDL cholesterol in the blood.

LDL cholesterol – which makes up most of the body’s cholesterol – is a massive contributor to the formation of plaque inside the arterial walls.

HDL cholesterol, on the other hand – which is dubbed “good” cholesterol – absorbs the lipids and carries them back to the liver.

For this reason, high levels of HDL cholesterol are associated with a lower risk for heart disease and stroke.

Other ways to lower bad cholesterol

Advice to lower levels of this cholesterol can include upping intake of soluble fibre.

The fibre works by latching onto fatty molecules inside the digestive tract during digestion, and removing them from the body.

Whey proteins, given as a supplement, could also lower both LDL and total cholesterol levels, according to the Mayo Clinic.

Foods that are notorious for raising cholesterol levels include trans and saturated fats, should be limited.