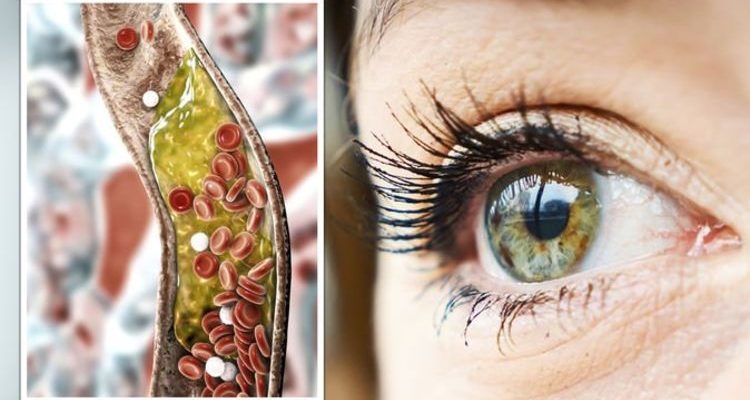 Cholesterol is a fat-like substance essential for myriad processes in the body, ranging from hormone production to brain function. However, as LDL levels or “bad cholesterol” increases, so does the threat. Health experts recommend that cholesterol levels in the blood be kept below a rating of five, with anything higher hiking your risk of complications proportionally. While the condition could increase the odds of a heart attack and stroke, high levels of the fatty substances have also been associated with loss of vision.

High cholesterol can affect the eyes and vision, with ramifications ranging from benign to irreversible blindness.

Studies have found that individuals with high cholesterol readings were at higher risk for open-angle glaucoma.

Glaucoma – a condition characterised by pressure in the eye that can damage the optic nerve can lead to vision loss – occurs when the pressure of fluid inside the eye is too high.

In the most common type of glaucoma, which is “open angle glaucoma”, the drainage channels in the eye become blocked.

READ MORE: Blindness breakthrough as monthly jabs first to half leading cause of sight loss

A study looked at 866 participants suffering primary open-angle glaucoma among a cohort of 136,000 participants.

Over the course of 15 years or more, participants were asked to provide updates on cholesterol levels and statin use.

Researchers analysing the information found that for every 20-point increase in total cholesterol there was a seven percent increase in glaucoma risk.

However, results showed that the risk decreased with use of statin drugs.

In fact, people who used statins for five years or longer had a 21 percent lower risk of developing glaucoma.

Glaucoma is believed to affect two percent of the population, and is the leading cause of preventable illness in the UK.

One ocular sign of high cholesterol in the eye, is a bluish ring that forms near the outside of the cornea (the otherwise clear front part of the eye.)

These rings can appear as cholesterol gets deposited into the cornea, in a process known as “arcus sinilis”, which can have devastating consequences for ocular health.

Another sign that is very serious and potentially blinding is the formation of plaque inside one of the small arteries within the eye.

This is caused by a build up of cholesterol that has broken off from a clot “upstream” which will block the flow of blood further “downstream”, thereby causing the tissue that is fed by that artery to die.

The results of this process, known as central retinal artery occlusion, is irreversible loss of function of the eye, which can include blindness.

It is believed that around a third of the population in the UK suffers from higher than recommended cholesterol levels during their life, with the average level in Britain at 5.8 in over-75s.

Low density lipoprotein contains the most cholesterol and its main role is to deliver it to tissue, it is the fraction most closely associated with heart disease.

On the other hand, high-density lipoprotein (HDL), dubbed good cholesterol – spends much of its time doing the opposite, and is thereby associated with a lower risk.

The third component, triglyceride, may have a lower profile than HDL and LDL, but too much is associated with early heart disease.