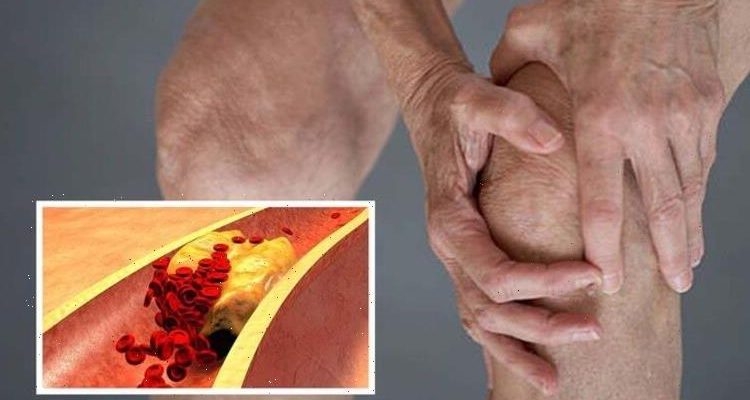 Peripheral arterial disease (PAD) in the legs or lower extremities is the narrowing or blockage of the vessels that carry blood from the heart to the legs. The CDC says it is primarily caused by the buildup of fatty plaque in the arteries, which is called atherosclerosis. The NHS says it is usually caused by a build-up of fatty deposits in the walls of the leg arteries, which “are made up of cholesterol and other waste substances”.

The CDC says that a “classic symptom” of PAD is pain in the legs with physical activity, such as walking, that gets better after rest.

However, it notes that up to four in 10 people with PAD have no leg pain.

It says that symptoms of pain, aches, or cramps with walking can happen in the buttock, hip, thigh, or calf.

There are also several other physical signs in the leg that may indicate PAD including some on your skin.

These include “hair loss; smooth, shiny skin, skin that is cool to the touch, especially if accompanied by pain while walking … sores or ulcers in the legs or feet that don’t heal”.

PAD is usually diagnosed through a physical examination by a GP, and by comparing the blood pressure in your arm and your ankle.

The Cleveland Clinic notes: “You may also feel weak or tired while walking. Affected parts of your leg may include your calves, thighs or buttocks.

“PAD can build up over a lifetime, and the symptoms may not become obvious until later in life.”

The health organisation says pain can be severe enough to interfere with normal walking.

It says: “The pain can be severe enough to limit your ability to participate in activities you enjoy, such as golfing or chasing after grandchildren.

“Reduced blood flow to your leg muscles causes this type of cyclical pain, which goes away at rest because your muscles need less blood flow at rest.”

The American Heart Association says: “If you have cramping, tingling or weakness in your legs, you might have peripheral artery disease.”

The organisation warns: “PAD can lead to leg or foot amputation and even heart attack or stroke. Early detection is key!”

Fortunately, not everyone with high cholesterol will experience PAD, and there are a number of ways to reduce cholesterol.

The British Heart Foundation (BHF) recommends all adults have a cholesterol check at any age, even if they feel completely well. It should be repeated every five years – or more often if the test was abnormal.

High cholesterol is somewhat common in the UK, and is more common in people who are overweight.

The NHS says that more than two in five people in England have high cholesterol “which puts them at significant risk of developing heart disease”.

The NHS adds that around 6.5 million adults in England are currently taking lipid-lowering drugs such as statins.

The NHS says there are five types of statin available on prescription in the UK. They include atorvastatin, fluvastatin pravastatin, rosuvastatin and simvastatin.