We’ve all been told that we need to do breast self-exams on the reg — but beyond those pamphlets you get from the doctor with the cartoon diagram showing you how to search for lumps in a circular motion, it’s very possible that you’re still kinda in the dark about how to do a proper breast exam, what to look for and when you should get in touch with your doctor. You shouldn’t feel bad about not magically knowing how to do these things or needing to do a refresher google every once in a while to confirm that you’re doing it right — after all, it’s not like giving yourself a breast exam was something covered in your health class or that any of us really got the full rundown of how to do everything we should for our health.

But considering that one in eight women will be diagnosed with breast cancer in their lifetimes, self exams are not something we should skip educating ourselves about.

So we’re here today giving you the rundown on symptoms (some which you probably had no idea could be a sign of cancer) and how you know when it’s time to go to the doctor to get checked out. So read on and hopefully leave this article feeling a bit more empowered, knowledgable and ready to put your breast foot forward.

What to look for in your self-exam

Along with your annual mammogram, you should be doing a monthly breast exam to keep an eye on your girls. We even have a user-friendly illustrated breast self-exam guide that you can bookmark for later that gives a lot more info than the little pamphlets you’re used to seeing.

Staying aware of your health and your body is important, says Dr. Editha (Edie) Krueger, a radiation oncologist who oversees the care of cancer patients undergoing radiation treatment at Radiology Associates of Appleton, ThedaCare and Bellin Health in Wisconsin, but not all symptoms are the same.

“In fact, a majority of patients are diagnosed with a mammogram and don’t have any symptoms,” Dr. Krueger tells SheKnows. Here are the most common symptoms to look for:

Monthly self-exams are helpful to get to know your breasts and learn what your normal feels like, Dr. Tsippora Shainhouse, FAAD, FRCPC, a Los Angeles dermatologist who performs over 20 full-body skin examinations daily in her office, says.

“Try examining them in the shower the week after your period, when breasts are less tender,” she says. “Soapy hands make it easy to feel for lumps. Be sure to feel under the nipple area and as far out as your armpit since the breast tissue can grow that far out.”

In the event that you do feel a non-tender breast lump that doesn’t go away for a few weeks, or is persistent and unrelated to your menstrual cycle, Dr. Shainhouse advises getting it checked. Along with the small breast lumps that can be easy to miss until they grow larger, skin changes are another big red flag that can indicate the early stages of breast cancer. Both Dr. Shainhouse and Dr. Krueger recommend watching carefully for “peau d’orange” on the breast — a French term for skin dimpling that makes the breast look like the peel of an orange.

When dimples in the breast are dangerous 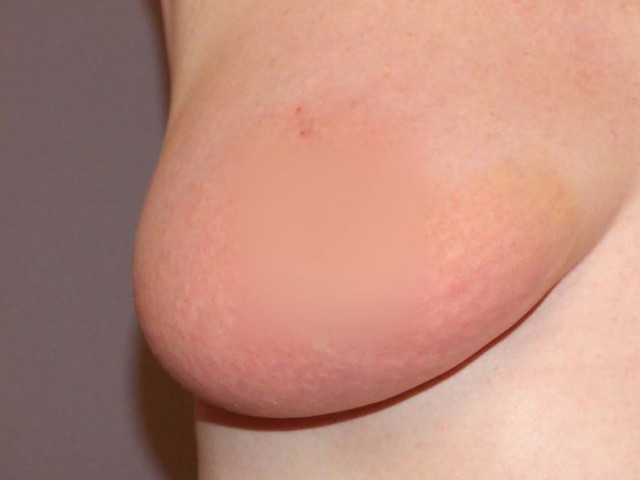 With peau d’orange, Tamsin Nicholson, health editor for the online pharmacy Dr. Felix, explains, breast skin will take on a dimpled, orange-peel appearance. “Dimpling does not necessarily mean cancer,” she says. “It can also be caused by cellulite, but if found on the breast, it is important to see your doctor as soon as possible to get it checked over. You should be especially concerned if you have any other symptoms of breast cancer, such as lumps in the breast tissue, an inverted nipple or swelling in the armpit.”

If cancer is causing single or multiple dimples in the breast, the explanation is simple — a new dimple may form when breast cancer grows inside the breast and pulls at the normal surrounding tissue, Dr. Marisa Weiss, founder and Chief Medical Officer of BreastCancer.org, breast radiation oncologist and breast cancer survivor, says. “Over time, the shape and contour of the breast can be distorted. A dimple can form on the surface of the breast as a result.”

53-year-old Mike Pollard, from Winston-Salem, North Carolina, tells SheKnows that spotting a dimple in the breast was what first alerted his wife to her breast cancer years ago: “I noticed the dimple on the side of her breast when she got out of the shower one morning. It was located where she would not have otherwise seen it on her own. As a nursing student at the time, I immediately noticed this change to her breast and examined, finding a lump directly behind it.”

Like too many women, Pollard says, his wife wasn’t doing regular self-exams at the time. If it wasn’t for the dimple, there’s a chance that her tumor would’ve gone unnoticed for months or more and may have progressed beyond its stage II status, putting her health in much more serious jeopardy. Ultimately, Pollard’s wife had a double mastectomy after a second mass was found with a different genetic signature, deep in her other breast where it would not have been detected in a routine mammogram.

“Especially with that in mind, this dimple may well have saved her life,” Pollard told SheKnows.

While not always indicative of breast cancer, a dimple is subtle and easy to miss — and it’s a breast cancer symptom that’s important to watch out for. As we saw in Pollard’s case, one of the most common mistakes women make is focusing on what they feel instead of what they see in their monthly self-exam.

It’s never too late to get to know your breasts

If you aren’t in the habit of checking yourself out in the mirror, the shower or when laying in bed, this is a good time to get started. After all, how can you spot changes (especially abnormal ones) if you don’t have a solid picture of what your version of normal looks and feels like?

Dr. Brian Czerniecki, MD, PhD, chair and senior member of the Department of Breast Oncology at Moffitt Cancer Center, considers skin dimpling an “unusual warning sign” that deserves a second glance. “Women should regularly inspect their breasts in a mirror to look for signs of indentation in the skin,” he says.

If you’ve been hesitant in the past, it’s time to be intimately familiar with your breasts  — and maybe encourage your partner(s) to do the same. Set a solid little reminder, maybe pick a weekend morning after your next period, score some nice boob-loving lotion or oil (the Colleen Rothschild ‘Breast’ Friend Self-Exam Butter is amazing for this, BTW) and make an exam play-date with your boobs. You won’t regret it!

A version of this story was originally published March 2016.