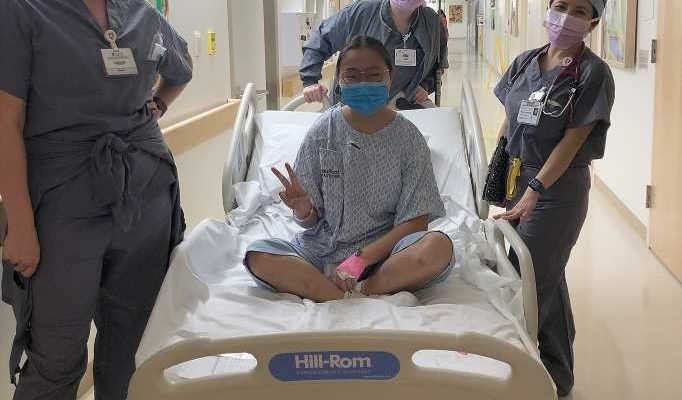 A heart transplant survivor has 5,000 reasons to smile — and now, so do the school staff at California children's hospital, who made a huge impact on the teen's life.

Athena Tran tells PEOPLE she learned that she was eligible for a Make-A-Wish just a few weeks ahead of her heart transplant on Dec. 6, 2017.

Instead of choosing to take a vacation or meet her favorite celebrity, Tran, 16, opted to use the $5,000 to give back to the school staff at Lucile Packard Children's Hospital at Stanford.

Run by the hospital in collaboration with the Palo Alto Unified School District, the program provides a "fully accredited academic curriculum" and enrichment programs to children who are critically and chronically ill, according to their website.

In Tran's case, it was where she found comfort and was able to continue her studies while being hospitalized for restrictive cardiomyopathy and recovering from her transplant.

"I was already given such a huge gift. I'm so fortunate, and so blessed to be able to have this new life," Tran says. "Giving back is the least that I could do to thank people for what they've done for me." Tran was diagnosed with restrictive cardiomyopathy in 2015 after experiencing breathing difficulties and chest pain.

The incurable condition causes the chambers of the heart to become stiff over time and backs up blood in the circulatory system, which can cause a stroke or heart failure, according to Cedars Sinai.

"Immediately after [my diagnosis], I was put on the transplant list because a transplant was always the only option for me," the teen recalls.

In May 2017, things took a terrifying turn when Tran had a stroke while sleeping, which left her partially paralyzed on her left side.

Though Tran admits the incident was "really bad," she credits the "kind" team at Lucile Packard for helping her recover and eventually start a rehab program. Months later, Tran started coughing up blood. She went back to the hospital and was ultimately bumped up the list for a transplant.

"It was really scary to me when I was younger, but by the time I had gone through my stroke, I was like, 'Yeah, I want this transplant. I want it really bad because I don't want this to happen again,'" she says. "And Stanford has been there for me this entire time and I was really confident in their abilities to do everything right, so I wasn't super scared."

While she waited for the transplant, Tran attended Lucile Packard's hospital school each day in two-hour segments, which kept her studies on track and also provided her with a social outlet.

"I was literally always there," she says. "My classes were the ones from school and I was just sent tests and homework, which the hospital staff helped administer to me… they also had several fun activities for us to do like art, drama, science lab, etc."

"We were given the opportunity to play games with other kids in the class, which helped us bond with each other," she continues. "They basically helped with whatever I needed." Around Thanksgiving 2017, Tran was notified about receiving a Make-A-Wish — and almost instantly knew how she wanted to use it.

"I grew really close to the hospital school during my time there and they really helped me grow as a person," she explains. "They were like family to me… Nothing really could fulfill me as a person as much as giving back would do for me, so that became my wish."

After successfully undergoing her "life-changing" transplant in December, Tran notified the Make-A-Wish team of her idea.

It wasn't until this past summer, however, that the teen was able to announce the news to Lucile Packard's school staff over a Zoom call.

The exciting moment was recorded on video and shows the staff tearing up, smiling, and expressing their gratitude for the teens' thoughtful gesture. "I hadn't seen them in a while because of COVID," Tran recalls. "So when we did the call, it was really fun seeing them again and seeing them so happy. I was really happy."

In the time since her transplant, Tran has been embracing every moment that life has to offer.

The junior in high school says she has "mostly recovered" from her procedure, but is still "doing a little bit of therapy to get the very fine movements" down on the left side of her body.

"I can run, I can hike, I can do things with my family," she says. "I've really regained my life back, and I think that's the most important part of all of this."

Tran also recently set up a non-profit organization called Stars To Care that raises awareness about organ donation and provides support to others going through transplants. "To me, it is so eye-opening and fun being able to talk to people who have been through experiences like me," she explains. "It's part of me giving back because it raises awareness for organ transplants and how much of a change it could make for people's lives."

"Just knowing that you can make a change with your body is just so amazing," she continues. "Looking at myself, my life was completely turned around. I didn't think I would run again or be able to be active or anything, but here I am and I'm really happy."

With a new chance at life, Tran says she wants to continue helping others and giving back.

"I feel just so lucky and I'm so happy that I'm able to be here," she shares, adding that she looks forward to "living the rest of my life and being able to just make the most out of what I've been given."